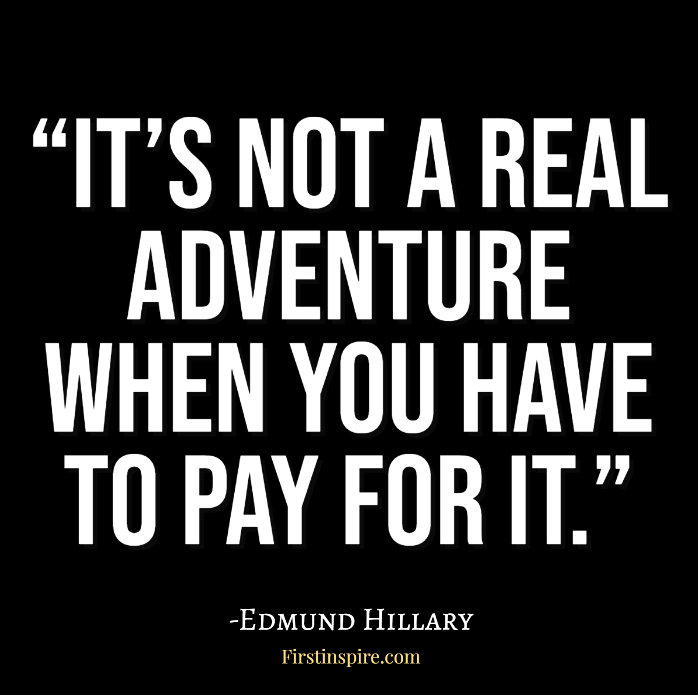 Sir Edmund Hillary is one of those men who has inspired thousands of people to climb Mount Everest. We have compiled a bunch of quotes by Edmund Hillary which includes his life experiences, mountaineering experiences, sir edmund hillary quote, commitment, and how a achieving a goal like mount Everest will change the way you look at life. So here are some sir edmund hillary quotes about Everest, quotes for strength, Life quotes and few more of his short positive quotes about life. Edmund hillary mount Everest expedition definitely changed his life and we hope these sayings changes yours. Here are some Edmund Hillary Quotes.

Sir Edmund Hillary became world famous when he became the first person to conquer Mount Everest with Tenzing Norgay. In 1953, Hillary was the first to reach the summit of Everest, the highest mountain in the world, together with the Tibetan mountaineer Sherpa Sirdar Tenzing Norgay. On May 29, 1953, at the age of 33, he and Sherpa climber Tenzing Norgay became the first known climbers to reach the summit of Mount Everest – see Everest Climbing Timeline. The way from the base camp to the summit took seven weeks, and the descent took only three days. Remember that the day before climbing Everest, he lifted about 30 kg to the South Col to an altitude of over 8000 meters. He climbed to New Zealand’s highest peak during the hottest season in January 1948.

Sir Edmund reached the summit with Nepalese Sherpa Tenzing Norgay, who inspired the New Zealand climber to devote much of his life to supporting the Sherpa community, the unknown heroes of Himalayan mountaineering.

The conquest of Everest was announced on the eve of the coronation of Elizabeth II, and the new queen knighted Hillary when she returned to Britain. After successfully climbing Mount Everest, Hillary received numerous awards, including the Knight Commander of the British Empire and the Coronation Medal of Queen Elizabeth II in 1953.

Hillary worked to help Sherpas, creating the Himalayan Trust to build schools, hospitals and transport hubs in Nepal. An avid climber, Hillary started climbing New Zealand’s Southern Alps in high school. In January 1948, Hillary climbed the South Ridge of New Zealand’s highest peak (Aoraki/Mt Cook) as a group. That same year, Hillary and Lowe were invited by the Joint Himalayan Committee to take part in the British attempt to climb Mount Everest in 1953.

Perhaps they thought that just being the first to climb the hill did not mean being immortal; perhaps they instinctively realized that fate had prepared another place for them. Because over time, they became representatives not only of their individual nations, but also of half of humanity. With all due respect to Tenzing the Sherpa (whose famous name is still subject to revisionism), but it was Hillary who received them first, not Tenzing. It is important to remember that Hillary and Tenzing were just two members of a large British team.

Whatever obstacles you face in life, you can overcome them, as Edmund Hillary did in the 1990s, when no one thought that one day people would conquer the mighty Everest. We must conquer, reach, get to the top; you have to know the end to be sure that you can win at the end – to know that there is no dream that you should not dare. A collection of quotes by Edmund Hillary, including: We do not conquer a mountain, but ourselves, and people do not decide to become outstanding.

“It is not the mountain we conquer but ourselves.”

“Human life is far more important than just getting to the top of a mountain.”

“I think it all comes down to motivation. If you really want to do something, you will work hard for it.”

“I think the really good mountaineer is the man with the technical ability of the professional and with the enthusiasm and freshness of approach of the amateur.”

“On the summit of Everest, I had a feeling of great satisfaction to be first there.”

“I have discovered that even the mediocre can have adventures and even the fearful can achieve.”

“Nobody climbs mountains for scientific reasons. Science is used to raise money for the expeditions, but you really climb for the hell of it.”

“I have been seriously afraid at times but have used my fear as a stimulating factor rather than allowing it to paralyze me. My abilities have not been outstanding, but I have had sufficient strength and determination to meet my challenges and have usually managed to succeed with them.”

“With practice and focus, you can extend yourself far more than you ever believed possible.”

“You climb for the hell of it.”

“You don’t have to be a hero to accomplish great things—to compete. You can just be an ordinary chap, sufficiently motivated to reach challenging goals.”

“Good planning is important. I’ve also regarded a sense of humor as one of the most important things on a big expedition. When you’re in a difficult or dangerous situation, or when you’re depressed about the chances of success, someone who can make you laugh eases the tension.”

“I will come again & conquer you because as a mountain you can’t grow, but as a human, I can”

“It’s not a real adventure when you have to pay for it.”

“While on top of Everest, I looked across the valley towards the great peak Makalu and mentally worked out a route about how it could be climbed. It showed me that even though I was standing on top of the world, it wasn’t the end of everything. I was still looking beyond to other interesting challenges.”

“Many people have been getting too casual about climbing Everest. I forecast a disaster many times.”

“I don’t spend a lot of time thinking about dying, but I like to think that I’ve – if it did occur – that I would die peacefully and not make too much of a fuss about it.”

“Ever since the morning of May 29, 1953, when Tenzing Norgay and I became the first climbers to step onto the summit of Mount Everest, I’ve been called a great adventurer.”

“There is precious little in civilization to appeal to a yeti.”

“Geography was not furthered by the achievement, scientific progress was scarcely hastened, and nothing new was discovered. Yet the names of Hillary and Tenzing went instantly into all languages as the names of heroes, partly because they really were men of heroic mold but chiefly because they represented so compellingly the spirit of their time.”

“I don’t know if I particularly want to be remembered for anything. I personally do not think I’m a great gift to the world. I’ve been very fortunate.”

“My relationship with the mountains actually started when I was 16. Every year, a group used to be taken from Auckland Grammar down to the Tangariro National Park for a skiing holiday.”

“I like to think of Everest as a great mountaineering challenge, and when you’ve got people just streaming up the mountain – well, many of them are just climbing it to get their name in the paper, really.”

“I’ve always hated the danger part of climbing, and it’s great to come down again because it’s safe.”

“I’ve always hated the danger part of climbing, and it’s great to come down again because it’s safe But there is something about building up a comradeship – that I still believe is the greatest of all feats – and sharing in the dangers with your company of peers. It’s the intense effort, the giving of everything you’ve got. It’s really a very pleasant sensation.”

“I think I mainly climb mountains because I get a great deal of enjoyment out of it. I never attempt to analyze these things too thoroughly, but I think that all mountaineers do get a great deal of satisfaction out of overcoming some challenge which they think is very difficult for them, or which perhaps may be a little dangerous.”

“Mount Everest, you beat me the first time, but I’ll beat you the next time because you’ve grown all you are going to grow… but I’m still growing!”

“It’s not the mountain we conquer but ourselves.”

“Despite all I have seen and experiences, I still get the same thrill out of glimpsing a tiny patch of snow in a high mountain gully and feel the same urge to climb toward it.”

“Becoming a ‘Sir’ is slightly uncomfortable at first, although it is a considerable honor. It is amazing how quickly you become accustomed to it.”

“As a youngster I was a great dreamer, reading many books of adventure and walking lonely miles with my head in the clouds.”

“The Sherpas play a very important role in most mountaineering expeditions, and in fact many of them lead along the ridges and up to the summit.”

“Motivation is the single most important factor in any sort of success.”

“No one remembers who climbed Mount Everest the second time.”

“It’s all bullshit on Everest these days.”

“I am a lucky man. I have had a dream and it has come true, and that is not a thing that happens often to men.”

“I think the whole attitude towards climbing Mount Everest has become rather horrifying. The people just want to get to the top. They don’t give a damn for anybody else who may be in distress and it doesn’t impress me at all that they leave someone lying under a rock to die.”

“When I was 50 years old, I actually decided to draw up a list of half a dozen things that I really hadn’t done very well, and I was going to make efforts to improve. One of them was skiing, and I really did become a very much better skier.”

“My mother was a schoolteacher and very keen that I go to a city school, so although it was fairly impoverished times, I traveled every day to the Auckland Grammar School.”

“I’m sure the feeling of fear, as long as you can take advantage of it and not be rendered useless by it, can make you extend yourself beyond what you would regard as your capacity. If you’re afraid, the blood seems to flow freely through the veins, and you really do feel a sense of stimulation.”

“The explorers of the past were great men and we should honour them. But let us not forget that their spirit lives on. It is still not hard to find a man who will adventure for the sake of a dream or one who will search, for the pleasure of searching, not for what he may find.”

“Adventuring can be for the ordinary person with ordinary qualities, such as I regard myself.”

“Once I’ve decided to do something, I do usually try to carry it through to fruition.”

“I really haven’t liked the commercialization of mountaineering, particularly of Mt. Everest. By paying $65,000, you can be conducted to the summit by a couple of good guides.”

“My most important projects have been the building and maintaining of schools and medical clinics for my dear friends in the Himalaya and helping restore their beautiful monasteries, too.”

“When you go to the mountains, you see them and you admire them. In a sense, they give you a challenge, and you try to express that challenge by climbing them.”

“When you’re climbing at high altitudes, life can get pretty miserable.”