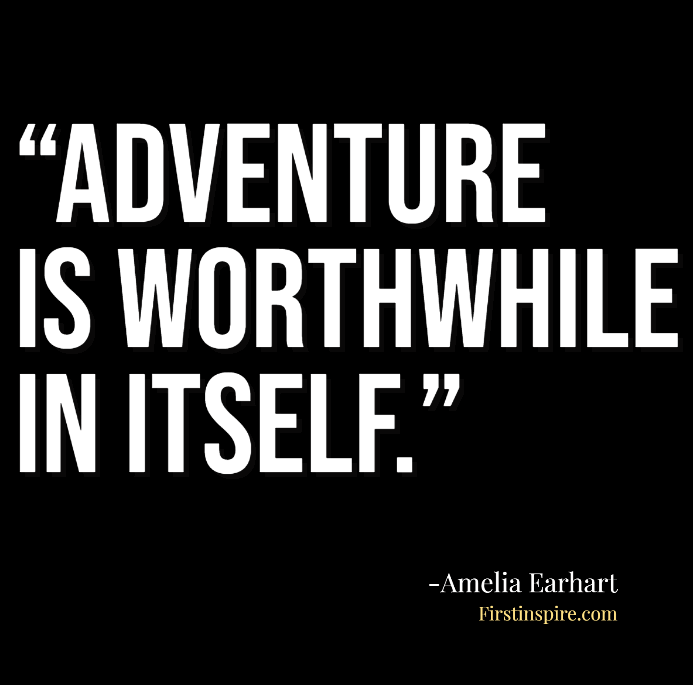 Amelia Earhart has inspired generations with her bravery and perseverance, as well as her fascination with the world around her. For this reason, there are many iconic Amelia Earhart quotes out there, and we’ve rounded up some of the best. The quotes contain the depth of the oceans, the vastness of the heavens, and a bundle of limitless inspiration. I have often said that the glamor of flight is the lure of beauty, and I don’t need any other flying to convince myself that the reason flyers fly, whether they know it or not, is because of the aesthetic appeal of flying.

Amelia Mary Earhart was born on July 24, 1897, in Atchison, Kansas, USA, and was the most famous female aviator of all time. Amelia Earhart, also known as Lady Lindy, was an American aviator and the first female pilot to successfully cross the Atlantic Ocean. Amelia Earhart became the first woman to sail solo around the Atlantic Ocean. Apart from this, Earheart also set many other records and wrote books about her flying experience.

She wanted to be the first of all female pilots to navigate the world around the world. She also set the world record for the fastest non-stop transcontinental flight, achieving this result in 19 hours and 5 minutes. Earhart became the first female aviator to fly solo across the Atlantic Ocean. Earhart soon received her first aviation award after flying at 14,000 feet, setting the world altitude record for female pilots in October 1922.

She was a successful and highly-publicized writer and worked as an aviation editor for Cosmopolitan magazine. She has set many other records, wrote successful books about her flying experiences, and was instrumental in the formation of The Ninety-Nines, an organization of women pilots. In 1935, Earhart became a visiting professor at Purdue University as an aeronautical engineering consultant and career advisor to female students. She was also a member of the National Women’s Party and an early proponent of the Equal Rights Amendment.

In addition to winning awards in aviation history, Earhart is also known as a symbol of the strength and determination of young women of her era. A writer, lecturer, poet, and vice president of aviation, Earhart turned her hobby into a profession, constantly breaking the conventions of the times that dictated women’s roles and behavior.

This gave Amelia the opportunity to study at a renowned educational institution in Rydal, Pennsylvania, at the Ogonz School. Amelia was named Amelia Mary Earhart after her two grandmothers, Amelia Harres Otis and Mary Wells Earhart. She took various jobs to support her aviation lessons with Neta Snook, an internationally renowned aviator. Working, saving, and saving, she was finally able to take piloting lessons.

Unfortunately, she mysteriously disappeared on July 2, 1937, while flying over the Pacific Ocean (presumably killed on January 5, 1939). He disappeared in 1937 while flying over the Pacific Ocean, trying to circumnavigate the world from the equator. After numerous searches, she was officially declared dead in 1939. After that day, Amelia Earhart was supposed to fly, and after another 6 days – at the beginning of 1921 – she took her first flight lessons, and the rest is history.

While attempting to circumnavigate the world in 1937 on a Purdue-funded Lockheed Model 10-E Electra, Earhart and navigator Fred Noonan disappeared into the central Pacific Ocean off Howland Island. Passion for her life, career, and death continues today.

While the exact circumstances of her disappearance and death remain a mystery to this day, it is certain that she spent her life pursuing her dreams and setting an example for girls and women alike. The eldest of two, railroad lawyer Samuel “Edwin” Stanton Earhart and Amelia “Amy” Otis, grew up to be her sister Grace Muriel Earhart’s special source of inspiration.

“Courage is the price that life exacts for granting peace.”

“A single act of kindness throws out roots in all directions, and the roots spring up and make new trees.”

“Adventure is worthwhile in itself.”

“No kind action ever stops with itself. One kind action leads to another. Good example is followed. A single act of kindness throws out roots in all directions, and the roots spring up and make new trees. The greatest work that kindness does to others is that it makes them kind themselves.”

“Better do a good deed near at home than go far away to burn incense.”

“The more one does and sees and feels, the more one is able to do, and the more genuine may be one’s appreciation of fundamental things like home, and love, and understanding companionship.”

“You haven’t seen a tree until you’ve seen its shadow from the sky.”

“The most difficult thing is the decision to act, the rest is merely tenacity. The fears are paper tigers. You can do anything you decide to do. You can act to change and control your life; and the procedure , the process is its own reward.”

“Everyone has ocean’s to fly, if they have the heart to do it. Is it reckless? Maybe. But what do dreams know of boundaries?”

“Being alone is scary, but not as scary as feeling alone in a relationship.”

“Courage is the price that Life exacts for granting peace, The soul that knows it not, knows no release, From little things; Knows not the livid loneliness of fear Nor mountain heights where bitter joy can hear The sound of wings.”

“Women, like men, should try to do the impossible. And when they fail, their failure should be a challenge to others.”

“Please know that I am aware of the hazards. I want to do it because I want to do it. Women must try to do things as men have tried. When they fail, their failure must be a challenge to others.”

“Flying might not be all plain sailing, but the fun of it is worth the price.”

“Women must pay for everything. They do get more glory than men for comparable feats, but, they also get more notoriety when they crash.”

“Obviously I faced the possibility of not returning when first I considered going. Once faced and settled there really wasn’t any good reason to refer to it.”

“There are two kinds of stones, as everyone knows, one of which rolls.”

“There is so much that must be done in a civilized barbarism like war.”

“In soloing – as in other activities – it is far easier to start something than it is to finish it.”

“the stars seemed near enough to touch and never before have i seen so many. i always believed the lure of flying is the lure of beauty, but i was sure of it that night.”