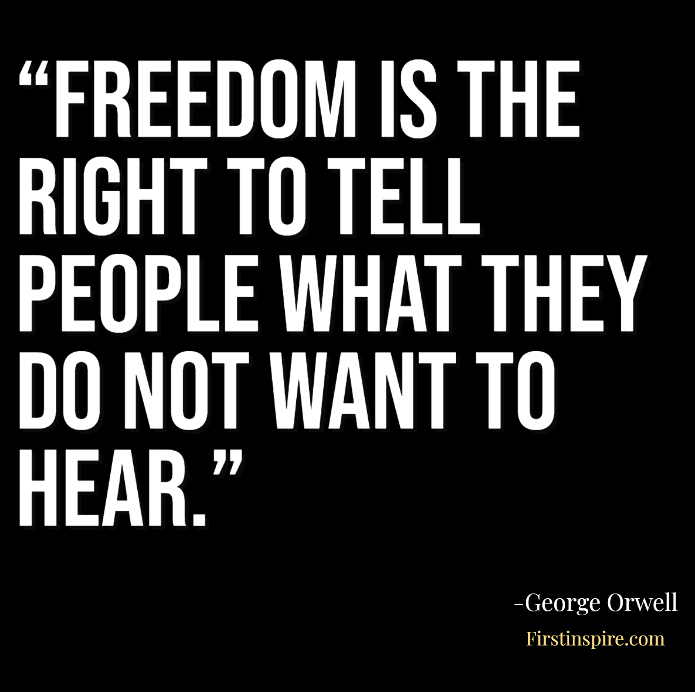 George Orwell is one of the most influential writers of the 20th century. His book 1984 is one of the best-selling books in history and his quotes are deeply ingrained in our culture. George Orwell is a political author and journalist who wrote the dystopian novel 1984. He was born in 1903 and died in 1950. His books, essays, and journalism were popular in his time and continue to be popular today.

George Orwell is the pseudonym of Eric Arthur Blair (1903–1950), a widely cited English writer, journalist and essayist. This language is associated with the influence of George Orwell. George Orwell is a British journalist and writer best known for his novels Animal Farm and 1984. Unfortunately, he did not manage to enjoy the success of the latter, since he died a year after the publication of the book. The son of a British colonial official, he studied in England and worked as a British imperial police officer in Burma before pursuing a career as a writer.

George Orwell was a strong-minded man who devoted his energies to writing politically charged novels, first at Animal Farm in 1945, then in 1984 in 1949. Orwell addressed some of the major political movements of his day and remains one of Britain’s greatest writers. This brought him great recognition and, for the first time in his life, provided him with financial well-being. If you like these quotes, you will love our collection of barnyard quotes that will teach you about the power of too much power.

The New York Times ranked Orwell as number two on its list of “50 Greatest British Writers Since 1945,” and in 2016 a statue of him was erected in front of the BBC in London. He will always be remembered for his outstanding journalism and essays, which seem to have been written for modern times many years ago.

In addition to the harsh remarks and clear prose of his essays and journalistic articles, his novels Animal Farm and 1984 are among the most influential novels of the 20th century. In his honor, below is our collection of wise, and inspirational quotes from George Orwell, collected from various sources over the years. If freedom is anything, it is the right to tell people what they don’t want to hear.

“Good prose should be transparent, like a window pane.”

“Journalism is printing what someone else does not want printed: everything else is public relations.”

“The most effective way to destroy people is to deny and obliterate their own understanding of their history.”

“The choice for mankind lies between freedom and happiness and for the great bulk of mankind, happiness is better.”

“People sleep peaceably in their beds at night only because rough men stand ready to do violence on their behalf.”

“Freedom is the right to tell people what they do not want to hear.”

“In a time of universal deceit – telling the truth is a revolutionary act.”

“Patriotism has nothing to do with Conservatism. It is actually the opposite of Conservatism, since it is a devotion to something that is always changing and yet is felt to be mystically the same.”

“It is curious how people take it for granted that they have a right to preach at you and pray over you as soon as your income falls below a certain level.”

“The further a society drifts from truth the more it will hate those who speak it.”

“That rifle on the wall of the labourer’s cottage or working class flat is the symbol of democracy. It is our job to see that it stays there.”

“What is to be expected of them is not treachery, or physcial cowardice, but stupidity, unconscious sabotage, an infallible instinct for doing the wrong thing.”

“The best books… are those that tell you what you know already.”

“We have now sunk to a depth at which restatement of the obvious is the first duty of intelligent men.”

“I enjoy talking to you. Your mind appeals to me. It resembles my own mind except that you happen to be insane.”

“News is something somebody doesn’t want printed; all else is advertising.”

“Freedom is the freedom to say that two plus two make four. If that is granted, all else follows.”

“Reality exists in the human mind, and nowhere else.”

“Being in a minority, even in a minority of one, did not make you mad. There was truth and there was untruth, and if you clung to the truth even against the whole world, you were not mad.”

“If you want a vision of the future, imagine a boot stamping on a human face – forever.”

“If you kept the small rules, you could break the big ones.”

“He was an embittered atheist, the sort of atheist who does not so much disbelieve in God as personally dislike Him.”

“Perhaps a man really dies when his brain stops, when he loses the power to take in a new idea.”

“When I see an actual flesh-and-blood worker in conflict with his natural enemy, the policeman, I do not have to ask myself which side I am on.”

“The greatest enemy of clear language is insincerity.”

“Man is the only creature that consumes without producing”

“Never use a long word where a short one will do.”

“I do not wish to comment on the work; if it does not speak for itself, it is a failure.”

“A society becomes totalitarian when its structure becomes flagrantly artificial: that is, when its ruling class has lost its function but succeeds in clinging to power by force or fraud.”

“Your worst enemy, he reflected, was your nervous system. At any moment the tension inside you was liable to translate itself into some visible symptom.”

“They could be made to accept the most flagrant violations of reality, because they never fully grasped the enormity of what was demanded of them, and were not sufficiently interested in public events to notice what was happening”

“All rulers in all ages have tried to impose a false view of the world upon their followers.”

“You will be hollow. We shall squeeze you empty, and then we shall fill you with ourselves.”

“A man who gives a good account of himself is probably lying, since any life when viewed from the inside is simply a series of defeats.”

“Truth becomes untruth if uttered by your enemy”

“The essence of being human is that one does not seek perfection.”

“For a creative writer possession of the ‘truth’ is less important than emotional sincerity.”

“Happiness can exist only in acceptance.”

“The Revolution will be complete when the language is perfect.”

“The people will believe what the media tells them they believe.”