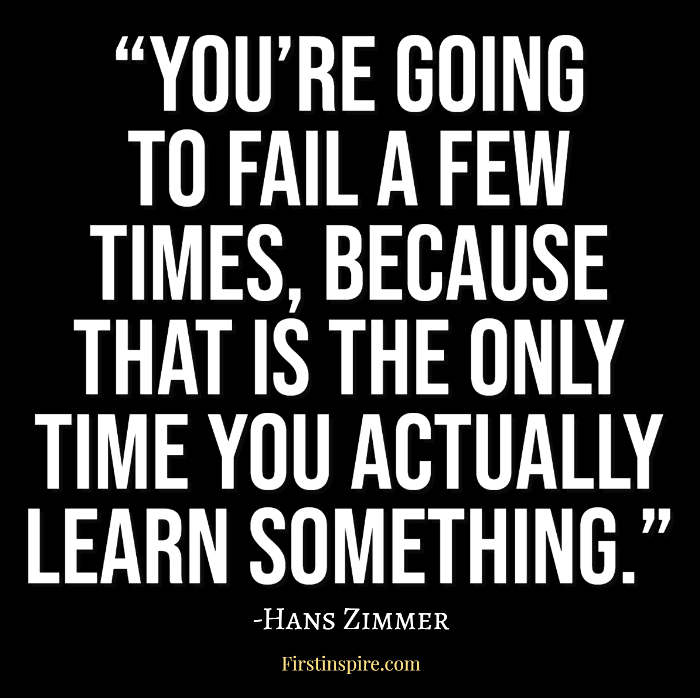 Hans Florian Zimmer is a German film score composer and record producer. His works are notable for integrating electronic music sounds with traditional orchestral arrangements. Since the 1980s, Zimmer has composed music for over 150 films. Here are some Hans Zimmer Quotes.

“A good score should have a point of view all of its own. It should transcend all that has gone before, stand on its own two feet and still serve the movie. A great soundtrack is all about communicating with the audience, but we all try to bring something extra to the movie that is not entirely evident on screen.”

“You always hear these stories of how Hollywood is so merciless on composers and how they all get beaten up. Nobody beats me up as much as I beat myself up. This is what I love doing and I have one life to do it in, and I better do it right. I better do it well.”

“Why get up in the morning unless you’re going to have an adventure?”

“Anything can become a musical sound. The wind on telegraph wires is a great sound; get it into your machine and play it and it becomes interesting.”

“I want to go and write music that announces to you that you can feel something. I don’t want to tell you what to feel, but I just want you to have the possibility of feeling something.”

“Electronic music lends itself to an abstract way of storytelling, so it keeps evolving. There’s a whole movement truly driving music further and there is no other music innovating as much as film music”

“What are you going to do when you are not saving the world.”

“You have to remain flexible, and you must be your own critic at all times.”

“The writing gets done away from the keyboard and away from the studio in my head, in solitude. And then I come in and hopefully have something, then I wrestle with sounds and picture all day long. But the ideas usually come from a more obscure place, like a conversation with a director, a still somebody shows you, or whatever.”

“The rules are: The more playful we get, the more we can get rid of the rules.”

“If you talk to any director, they’ll say music is fifty percent of the movie.”

“Get rid of the shitty sound. Life’s too short.”

“I’ve spent my life trying to make things simpler. Because I find ultimately that complicated doesn’t reach the heart.”

“You’re going to fail a few times, because that is the only time you actually learn something.”

“I wake up around noon, light a cigarette, get a cup of coffee, sit in the bathtub for an hour and daydream, and I usually come up with some ideas… It’s a very irresponsible life. The only decisions I make are about the notes I’m writing.”

“I don’t drive, so one of my assistants drives me to my writing room, and I have a calendar on the wall telling me how much time I have left, and how far behind I am. I look at it and panic, and decide which scene to work on. And you sit there plonking notes until something makes sense, and you don’t think about it any more. Good tunes come when you’re not thinking about it.”

“What’s the point of getting up in the morning unless you’re gonna have an adventure? As the moments of our life are ticking away you have to be aware that it needs to be an adventure”

“I have all these computers and keyboards and synthesizers, and I rattle away. For instance, with The Lion King I wrote over four hours worth of tunes, and they were really pretty -but totally meaningless. So in the end I came up with material I liked. We worked on The Lion King for four years, but I wasn’t toying until the last three-and-a-half weeks properly. On Crimson Tide, on the other hand, I just went in and within seconds I knew what I wanted.”

“As the seconds of our lives are ticking away, you have to realize that life needs to be an adventure.”