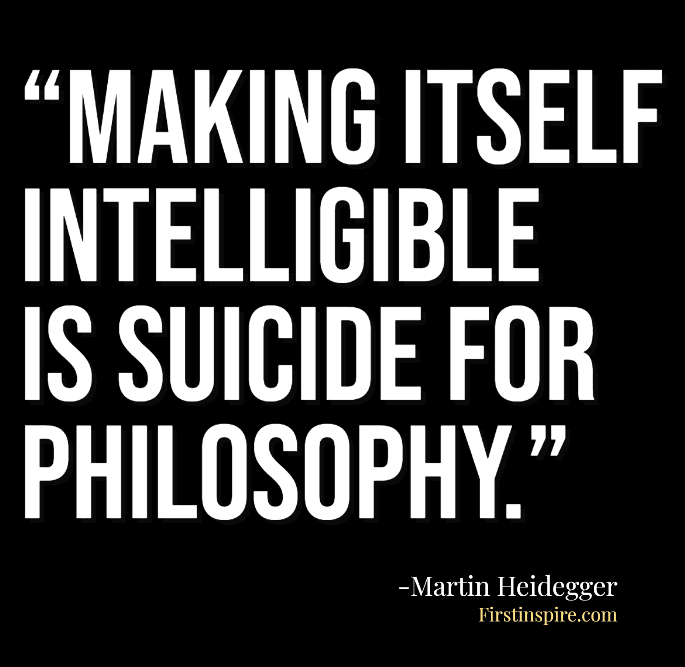 Martin Heidegger was a key German philosopher of the 20th century. He is best known for his contributions to phenomenology, hermeneutics, and existentialism. In Heidegger’s fundamental text Being and Time, “Dasein” is introduced as a term for the type of being that humans possess. Here are some Martin Heidegger Quotes.

“Every man is born as many men and dies as a single one.”

“Why are there beings at all, instead of Nothing?”

“I know that everything essential and great originated from the fact that the human being had a homeland and was rooted in tradition.”

“Making itself intelligible is suicide for philosophy.”

“If I take death into my life, acknowledge it, and face it squarely, I will free myself from the anxiety of death and the pettiness of life – and only then will I be free to become myself.”

“Anyone can achieve their fullest potential, who we are might be predetermined, but the path we follow is always of our own choosing. We should never allow our fears or the expectations of others to set the frontiers of our destiny. Your destiny can’t be changed but, it can be challenged. Every man is born as many men and dies as a single one.”

“We should never allow our fears or the expectations of others to set the frontiers of our destiny.”

“Tell me how you read and I’ll tell you who you are.”

“Dwelling is not primarily inhabiting but taking care of and creating that space within which something comes into its own and flourishes.”

“The possible ranks higher than the actual.”

“To be a poet in a destitute time means: to attend, singing, to the trace of the fugitive gods. This is why the poet in the time of the world’s night utters the holy.”

“The human being is not the lord of beings, but the shepherd of Being.”

“The German language speaks Being, while all the others merely speak of Being.”

“Profound boredom, drifting here and there in the abysses of our existence like a muffling fog, removes all things and men and oneself along with it into a remarkable indifference. This boredom reveals being as a whole.”

“Celebration… is self-restraint, is attentiveness, is questioning, is meditating, is awaiting, is the step over into the more wakeful glimpse of the wonder – the wonder that a world is worlding around us at all, that there are beings rather than nothing, that things are and we ourselves are in their midst, that we ourselves are and yet barely know who we are, and barely know that we do not know all this.”

“Language is the house of the truth of Being.”

“Pessimism negates the existing world. Yet its negating is ambiguous. It can simply will decay and nothingness, but it can also renounce what exists and thus open a path for a new formation of the world.”

“The small are always dependent on the great; they are “small” precisely because they think they are independent. The great thinker is one who can hear what is greatest in the work of other “greats” and who can transform it in an original manner.”

“Body’, ‘soul’, and ‘spirit’ may designate phenomenal domains which can be detached as themes for definite investigations; within certain limits their ontological indefiniteness may not be important. When, however, we come to the question of man’s Being, this is not something we can simply compute by adding together those kinds of Being which body, soul, and spirit respectively possess–kinds of being whose nature has not as yet been determined. And even if we should attempt such an ontological procedure, some idea of the Being of the whole must be presupposed.”

“Time is not a thing, thus nothing which is, and yet it remains constant in its passing away without being something temporal like the beings in time.”

“What is peddled about nowadays as philosophy, especially that of N.S., but has nothing to do with the inner truth and greatness of that movement is nothing but fishing in that troubled sea of values and totalities.”

“Man acts as though he were the shaper and master of language, while in fact language remains the master of man.”