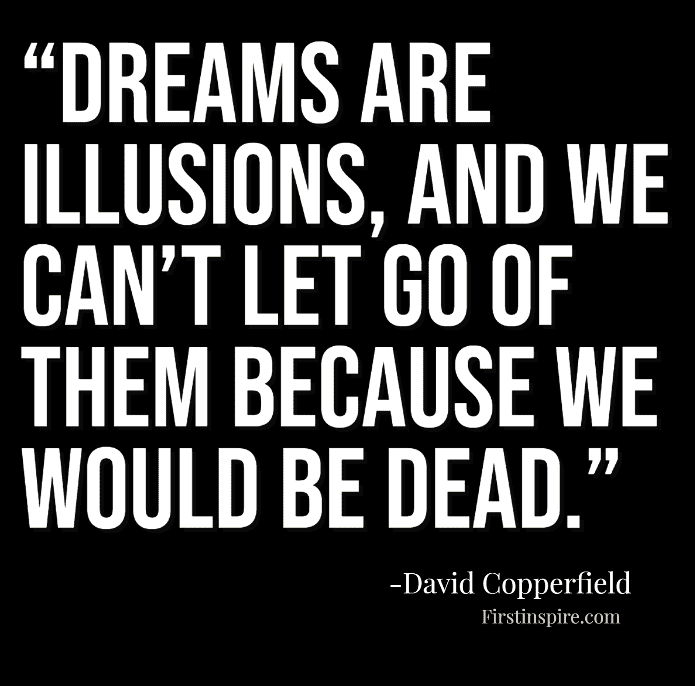 Over a four-decade career as an illusionist, Copperfield has successfully set 11 Guinness World Records, became a star on the Hollywood Walk of Fame, was knighted by the French government and received the title of Living Legend from the United States Library. Congress. Here are some David Copperfield Quotes. He is best known as the most commercially successful wizard in history, according to the prestigious business magazine Forbes. We hope you like the compilation of quotes from David Copperfield.

“The most important thing in life is to stop saying ‘I wish’ and start saying ‘I will.’ Consider nothing impossible, then treat possibilities as probabilities.”

“It wasn’t just about doing tricks. It’s about taking an audience to another place, a special place, so they can really suspend their disbelief. Its about amazing the audience as well as moving them.”

“In movies, storytelling and every single art form, we’re creating wonder. You’re starting with a blank page and creating something that doesn’t exist.”

“The most important thing is presentation.”

“I’m just waiting for people to start asking me to make the rain disappear.”

“No self-respecting gay guy would have ever made some of the hair and clothing choices I am still trying to live down.”

“We all possess the need to dream.”

“Dreams are illusions, and we can’t let go of them because we would be dead.”

“The audiences are what keep me enthusiastic.”

“The audience likes to be taken on new journeys.”

“Never stop listening to your audience.”

“When people say you can’t do it – that it’s impossible – never lose hope. Just because they couldn’t doesn’t mean you can’t.”

“My dreams are my dress rehearsals for my future.”

“When you’re a guy and meet a girl the first time, you do whatever it takes.”

“I used to fly around the stage without strings or camera tricks. That took seven years to create.”

“It is the unspoken ethic of all magicians to not reveal the secrets.”

“I find revealing the secrets of magic quite reprehensible.”

“Magic has been something I’ve been really good at since I was really young. The ability has always come easy to me, I’m not sure why.”

“You have to learn certain skills to present magic.”

“What I’ve tried to do in my stage magic is to take a trick and give it an emotional hook.”

“I’m really trying hard not to do anything that has been done before. So knowing everything I can about the legacy of magic challenges my team and I to invent new illusions.”

“Magicians lose the opportunity to experience a sense of wonder.”

“I try to help people realize their dreams by using magic to tell stories that educate, move, and inspire.”

“Normally, I do magic on the stage. But I can make magic credible and resonate through a TV screen.”

“It’s really hard to think of one kind of magic as a favorite. I’ve been really fortunate in that I’ve been able to perform such a diverse range of things.”

“The real secret of magic lies in the performance.”

“Magicians are the people who began to use film as an illusion on stage.”

“But when I go off stage I don’t have a deck of cards with me all the time.”