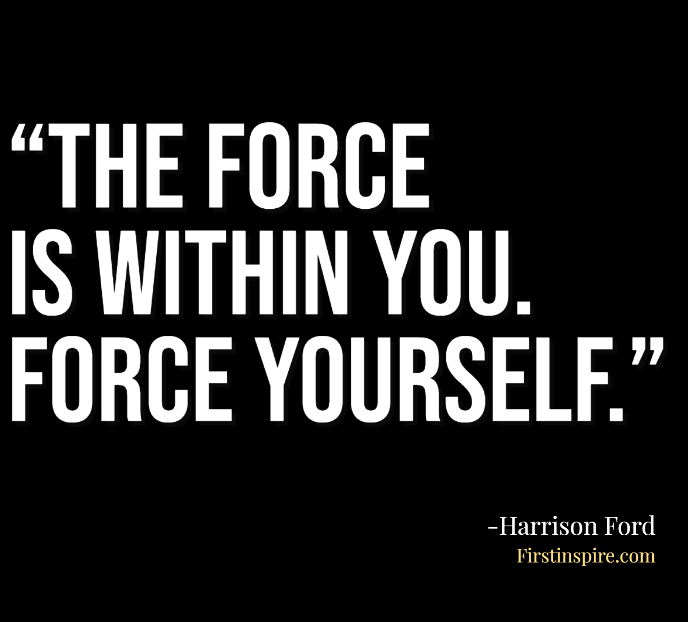 Harrison Ford is one of the most popular actors in the world, and he’s definitely not afraid to speak his mind. Whether it’s about his own work or Hollywood in general, this guy has some great thoughts on living life to the fullest. We have complied a list of Harrison ford quotes including Harrison ford inspirational quotes, Harrison ford quotes from the movie and his life quotes, etc. We hope you like the Inspirational sayings and quotes from the Hollywood’s legend. To be inspired quotes will take you through hard times.

“I realized early on that success was tied to not giving up. Most people in this business gave up and went on to other things. If you simply didn’t give up, you would outlast the people who came in on the bus with you.”

“It’s important not to base your ambition on anybody else’s history, but to figure out how best to use your own particular personality and understanding of yourself to help tell other people’s stories.”

“We all have big changes in our lives that are more or less a second chance.”

“What I think is important for a young person is to figure out how to be useful and not be so concentrated on themselves, but to see what they can do to make the overall collaboration with all the other people involved in a movie work better.”

“My goal was just to work regularly. I didn’t ever expect to be rich or famous. I wanted to be a working character actor.”

“You know how a woman gets a man excited? She shows up.”

“An icon means nothing to me. I don’t understand what it means to anybody actually. It seems like a word of convenience. It seems to attend to the huge success of certain kinds of movies that I did, but there’s no personal utility in being an icon. I don’t know what an icon does, except stand in a corner quietly accepting everyone’s attention. I like to work, so there’s no utility in being an icon.”

“I don’t mind doing interviews. I don’t mind answering thoughtful questions. But I’m not thrilled about answering questions like, ‘If you were being mugged, and you had a lightsaber in one pocket and a whip in the other, which would you use?’”

“Our health relies entirely on the vitality of our fellow species on Earth.”

“I just like the process of taking something written on a sheet of paper and giving it life and shape. I like the collaborative process of filmmaking, which is all simply to say that I love my work and I would continue to look for things that have the potential to be engaging and successful.”

“All I would tell people is to hold onto what was individual about themselves, not to allow their ambition for success to cause them to try to imitate the success of others. You’ve got to find it on your own terms.”

“What I look for is identifying what the utility of a character is to the telling of the story overall. If I can identify that from reading the script, then I’ve got a clear idea of whether or not I think the character is worth playing.”

“You may get real tired watching me, but I’m not going to quit.”

“I think you have to be very careful with effects that they don’t overpower the story with the visual element.”

“’May the Force be with you’ is charming but it’s not important. What’s important is that you become the Force – for yourself and perhaps for other people.”

“What I observed about my fellow actors was that most gave up very easily.”

“If you’re going to define me properly, you must think in terms of my failures as well as my successes.”

“[On being an actor] .nothing more than a worker in a service occupation . It’s like being a waiter or a gas station attendant, but I’m waiting on 6 million people in a week if I’m lucky.”

“Wood burns faster when you have to cut and chop it yourself.”

“I enjoyed carpentry, and it was very good to me for 12 years.”

“Some actors couldn’t figure out how to withstand the constant rejection. They couldn’t see the light at the end of the tunnel.”

“I’m like old shoes. I’ve never been hip. I think the reason I’m still here is that I was never enough in fashion that I had to be replaced by something new.”

“When we protect the places where the processes of life can flourish, we strengthen not only the future of medicine, agriculture and industry, but also the essential conditions for peace and prosperity.”

“I wanted to live the life, a different life. I didn’t want to go to the same place every day and see the same people and do the same job. I wanted interesting challenges.”

“If I were a serious person, I’d probably have a real job.”

“You know you’re getting old when all the names in your black book have M. D. after them.”

“The Force is within you. Force yourself.”