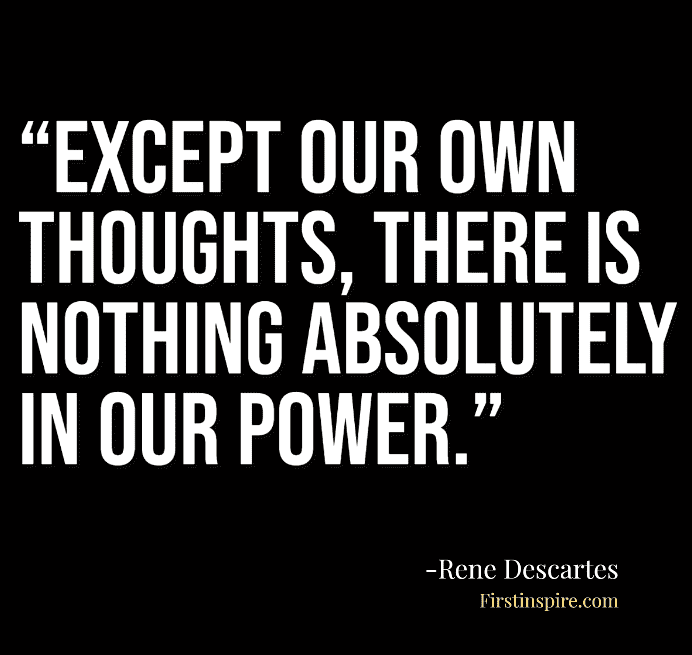 René Descartes was a famous philosopher, mathematician, and scientist. He is most well-known for his philosophical thought, in which he introduced the concept of dualism to the world. Dualism is the idea that there are two substances—the material and the spiritual. The mind is not the same as the body, but they are connected. Here are some Rene Descartes Quotes.

Descartes had many ideas in his lifetime that were considered groundbreaking at their time. Here are some quotes that show how Descartes was someone who changed society’s way of thinking about science and spirituality forever. So we have compiled quotes of Rene Descartes that will motivate you.

“Whenever anyone has offended me, I try to raise my soul so high that the offense cannot reach it.”

“It is not enough to have a good mind; the main thing is to use it well.”

“Divide each difficulty into as many parts as is feasible and necessary to resolve it.”

“If you would be a real seeker after truth, it is necessary that at least once in your life you doubt, as far as possible, all things.”

“Each problem that I solved became a rule, which served afterward to solve other problems.”

“The two operations of our understanding, intuition and deduction, on which alone we have said we must rely in the acquisition of knowledge.”

“If it is not in my power to arrive at the knowledge of any truth, I may at least do what is in my power, namely, suspend judgment.”

“Nothing is more fairly distributed than common sense: no one thinks he needs more of it than he already has.”

“A state is better governed which has few laws, and those laws strictly observed.”

“I am accustomed to sleep and in my dreams to imagine the same things that lunatics imagine when awake.”

“With me, everything turns into mathematics.”

“The greatest minds, as they are capable of the highest excellencies, are open likewise to the greatest aberrations; and those who travel very slowly may yet make far greater progress, provided they keep always to the straight road than those who, while they run, forsake it.”

“The reading of all good books is like a conversation with the finest minds of past centuries.”

“In order to improve the mind, we ought less to learn, than to contemplate.”

“Travelling is almost like talking with those of other centuries.”

“Any community that gets its laughs by pretending to be idiots will eventually be flooded by actual idiots who mistakenly believe that they’re in good company.”

“Situations in life often permit no delay; and when we cannot determine the course which is certainly best, we must follow the one which is probably the best. This frame of mind freed me also from the repentance and remorse commonly felt by those vacillating individuals who are always seeking as worthwhile things which they later judge to be bad.”

“The senses deceive from time to time, and it is prudent never to trust wholly those who have deceived us even once.”

“An optimist may see a light where there is none, but why must the pessimist always run to blow it out?”

“Except our own thoughts, there is nothing absolutely in our power.”

“Illusory joy is often worth more than genuine sorrow.”

“Intuitive knowledge is an illumination of the soul, whereby it beholds in the light of God those things which it pleases Him to reveal to us by a direct impression of divine clearness.”

“How can you be certain that your whole life is not a dream?”