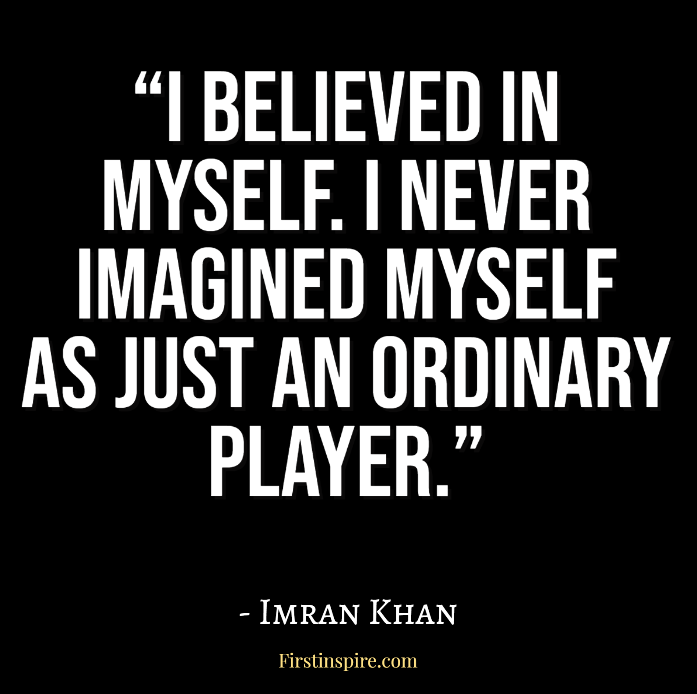 Imran Ahmed Khan Niazi HI PP is a Pakistani politician and former cricketer who is the 22nd and current prime minister of Pakistan. He is also the chairman of the Pakistan Tehreek-e-Insaf. Here are some Imran Khan Quotes.

“Cricket is a pressure game, and when it comes to an India-Pakistan match the pressure is doubled.”

“I have always believed that one should not be scared of losing, I think that really is the key.”

“It’s more important to try to do something for the crores of poor people of my country.”

“These so-called extremists in Pakistan should be brought into the mainstream; if you marginalize them, you radicalize them.”

“I am called an Islamic fundamentalist by Rushdie. My critics in Pakistan say I am a Zionist agent. I must be doing something right.”

“One is actually the democracy here, you know, people are, people assume that this election means that there is democracy in Pakistan. There is no democracy.”

“Spirituality does two things for you. One, you are forced to become more selfless, two, you trust to providence. The opposite of a spiritual man is a materialist. If I was a materialist I would be making lots of money doing endorsements, doing cricket commentary. I have no interest in that.”

“The team that is going to win is the one that does its homework the best by studying its opponents.”

“I believed in myself. I never imagined myself as just an ordinary player.”

“But I don’t need to use politics as a way of making money.”

“During my 21 years of playing cricket, I have never been approached by anyone or offered a bribe.”

“What I perceive, is above all justice, where everyone has the same law.”

“A country that relies on aid? Death is better than that. It stops you from achieving your potential, just as colonialism did.”

“Just give it everything you’ve got and bowl as fast as possible.”

“The future of Indo-Pak cricket will depend on how the peace process goes.”

“In Pakistan politics is hereditary.”

“The war on terror is the most insane and immoral war of all time. The Americans are doing what they did in Vietnam, bombing villages. But how can a civilised nation do this? How can you can eliminate suspects, their wives, their children, their families, their neighbours? How can you justify this?”

“And when the pressure was on us, the team handled it very well. One has to learn to play well under pressure.”

“I am basically a private person.”

“If your house is burning, wouldn’t you try and put out the fire?”

“They do not understand Islam, and I think that is one area where perhaps I hope one day I will play a role in actually making people understand what we perceive Islam to be.”

“Terrorism is you winning hearts and minds of people.”

“I want to have a president in the U.S. who tries to win the hearts and minds of the Muslim world.”

“I did not lose this election, or had a bad result compared with what we might have got because of Islam.”

“Personally I don’t think solving corruption is such a big problem.”

“What most people didn’t realize in the Western countries is that here its not a question of having supporters, its a question of getting these votes to the polling stations.”

“Win or lose today I am proud of the way my boys have played in the tournament.”

“At the moment we have a ruling class that has one law and the people the other.”

“In fact the experience at Oxford has really helped me later in life.”