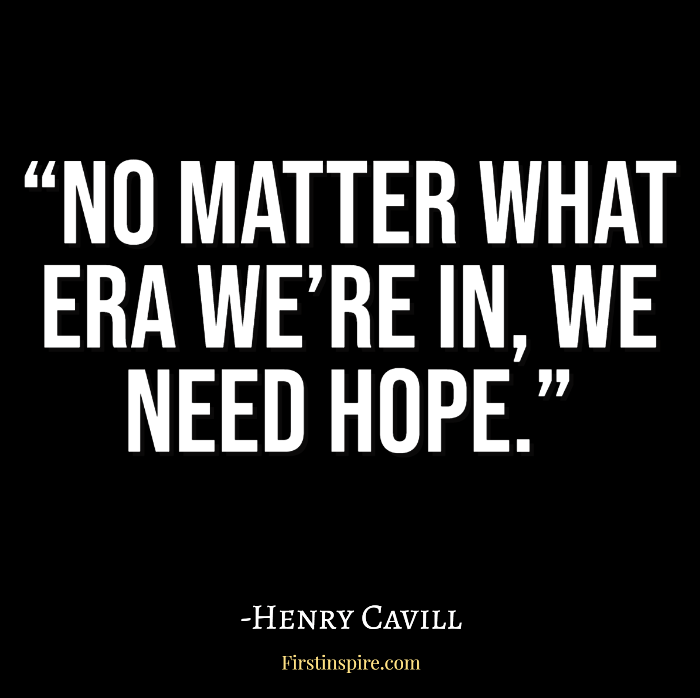 Henry William Dalgliesh Cavill is a British actor. He is known for his portrayal of Charles Brandon in Showtime’s The Tudors, DC Comics character Superman in the DC Extended Universe, Geralt of Rivia in the Netflix fantasy series The Witcher, as well as Sherlock Holmes in the Netflix film Enola Holmes. Here are some henry Cavill quotes.

“As much as everyone says that Superman is good, a lot of other people might say that that’s why they find him boring A lot of Batman fans might say that.”

“My mother is such an incredibly strong woman. She raised a family of five boys extremely well. She made us all strong, loving, caring people. We all support each other. I’m really thankful to her.”

“The point of acting is to pretend you’re someone else and sell a story.”

“I’m a giant softy, for sure, but I honestly think these days it’s probably considered more masculine to be emotionally connected.”

“It’s difficult to judge other actors, because as an actor you’re looking at different things than what an audience is looking at.”

“Not every job is a good job.”

“You can train and train until you are blue in the face, but you’ve got to diet, you’ve got to have that leanness because if you are not lean, your abs won’t show. Of course, the training has to be put in, but then you’ve to shed all the fat and keep the fat off. And that’s how you get an eight pack.”

“I work out two, two and a half hours a day. For ‘Immortals,’ it was body-weight stuff: crunches, pullups, and martial arts-based cardio.”

“The hardest part of acting is not being guaranteed work. Every job could be your last.”

“Some people thrive under pressure, but pressure can also ruin your performance, it can push you down angles which you don’t want to go.”

“At boarding school there wasn’t much time for much of anything except education.”

“Certainly, for younger guys, Superman is this mythological character that they’ve thought about and explored in their imaginations… But one thing I really like about Superman fans is that they’re so open-minded and excited and honest. There’s something beautiful about their enjoyment of it – something very Superman-like.”

“As much as I do love real-life stories they can often make you hurt in a way I’d rather not hurt. . . . For some reason, it’s always the pain that gets you.”

“My fame? Truly I don’t consider myself famous…long way to go yet. But if anyone does ask for an autograph it’s a wonderful feeling…”

“A large amount of constant activity will get things going. For example, training in the morning will have everything, all the juices flowing by the time you actually get to work. So, when you’re at work, you’ve been already up for an hour or so or two hours, and you’re raring to go where everyone else is still wiping sleep out of their eyes.”

“I’m from a family of six men, so I’m bound to be physical.”

“A lot of the stuff you do as an actor – or I do, because I can’t speak for everyone – is not always consciously thought out. A lot of the time, for me, it’s actually just feeling stuff, and it happens all in the moment and your body reacts.”

“I suppose that when I’m building a character, it’s usually related to what their family is like and who their parents are, as well as how I grew up – that nurture side.”

“Regrets are something you can’t really have as an actor, because ultimately you’ll end up destroying yourself there’s a lot of disappointment in this business.”

“As an outside; don’t worry about failure, because failure will take care of itself. Focus on success.”

“People have this belief that actors are able to go out there and say, ‘Oh I choose this job,’ but most of the time we’re just taking the job we can get. We don’t just get offered thousands of jobs; we might earn one job a year and that’s the one we’ll take because we’ve got to pay the rent.”

“If you’ve got nothing else, passion will get you through.”

“My mother works in a bank, and my dad is the head of my management team and also works in finance.”

“Iam training two-and-a-half hours a day, pushing my body beyond its normal limits, putting on a lot of muscle mass and just making myself look like Superman,”

“I never thought of myself as unlucky. When you aim high, it’s tough to get there unless something really fortunate happens.”

“My version of Superman is essentially of a guy who has spent his whole life alone.”

“No matter what era we’re in, we need hope.”

“I didn’t see a lot of comic books growing up.”

“I like to go full bore into something. If you have a backup plan, then you’ve already admitted defeat.”