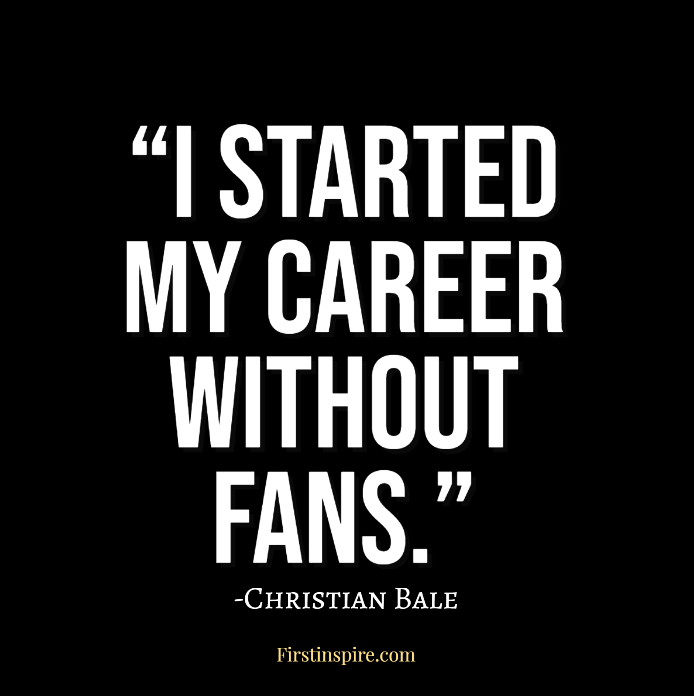 Christian Charles Philip Bale is an English actor. Known for his versatility and recurring physical transformations to play his roles, he has been a leading man in films of several genres. Bale is the recipient of various accolades, including an Academy Award and two Golden Globe Awards. Here are some Christian bale quotes.

“I tend to think you’re fearless when you recognize why you should be scared of things, but do them anyway.”

“All of the muscles were gone, so that was a real tough time of rebuilding all of that. But you have a deadline, you have an obligation. You’ve said that you will commit to this part, and I just can’t live with myself for not really giving it as much as I can.”

“If you’re smart you’re just gonna be all about the work. But as a young person, you want to going out to clubs and doing all the stuff. I’m just glad I survived it.”

“I think trying too hard to be sexy is the worst thing in the world a woman can do.”

“I want to do good work. I want the opportunity to work with good people, and the only way I’m gonna do that is to commit 110% – you get out what you put in.”

“I only sound intelligent when there’s a good script writer around.”

“I feel like I’m pretty good but I don’t like to toot my own horn, you know. I want to let the work speak for itself and kind of move on to the next thing.”

“You say something bad about Newsies and you have an awful lot of people to answer to.”

“It’s tough to make a good movie. I think the bigger the movies are, the worse they are. A lot of big movies make a lot of money and you kind of forget about what they are and they don’t really make you think.”

“Essentially, I’m untrained, so I just go with my imagination and try to put myself as solidly as I can into the shoes of whatever person I’m going to be playing.”

“I don’t want to know about the lives of other actors and I don’t want people to know too much about me. If we don’t know about the private lives of other actors, that leaves us as clean slates when it comes to playing characters. That’s the point, they can create these other characters and I can believe them. I think if you’re a good enough actor, that’s the way to longevity in the film business. Keep everybody guessing.”

“An actor should never be larger than the film he’s in.”

“Art is something to be proud of. Art is no compromise.”

“I like the idea of movies having a magic element. How many times have you seen an actor in a movie who you know only as the character? It’s wonderful, isn’t it?”

“I have a fear of being boring.”

“It’s the actors who are prepared to make fools of themselves who are usually the ones who come to mean something to the audience.”

“But I learned that there’s a certain character that can be built from embarrassing yourself endlessly. If you can sit happy with embarrassment, there’s not much else that can really get to ya.”

“So yeah, a good director will be able to listen and hear everything, but have a confident vision of his own that he can say, ‘oh yeah – that’s a great point.’ And you never know; often you can help far more than you think you can, because there’s so much more that he’s juggling than an actor.”

“I mean, first of all, let me say whichever superhero first came up with the idea of wearing a cape, he wasn’t really onto anything good. The number of times I’m treading on that damn thing or I throw a punch and it ends up covering my whole head. It’s really not practical.”

“Planning a career, I always find that such a tricky thing, because I don’t have much of a plan, really.”

“In everyday life, my wife is the most wonderful. We’re in love with each other beyond belief.”

“It’s got to do with putting yourself in other people’s shoes and seeing how far you can come to truly understand them. I like the empathy that comes from acting.”

“Putting on weight is easy all the way through. But after the first couple of weeks, the novelty wears off very quickly, and your body is groaning and starting to really shout at you, saying, ‘Why? Why? Why? Why are you doing this?’”

“There are movies that require fantasy and slightly more fantastical acting. Lines that are good for certain movies, in real life circumstances, would be absolutely unbelievable things to really say, and you would look at these people like they’re freaks for conversing that way. But somehow for certain styles of movies, it works, and it seems fine.”

“There are movies where actors aren’t characters but movie stars, being cool beyond belief throughout the whole movie. That is what it is. And we reveal ourselves when we act, very often without noticing. But if I can manage to do a character without showing anything of myself, then that’s the ultimate goal for me. No leakage.”

“There was a great complexity to my father. He was a devoted family man. But, in the same breath, he simply was not suited to an anchored life. He should have been somebody who had a backpack, an old map, a bit of change in his pocket and that was it – roaming the world.”

“I’m not really into musicals.”

“I started my career without fans.”