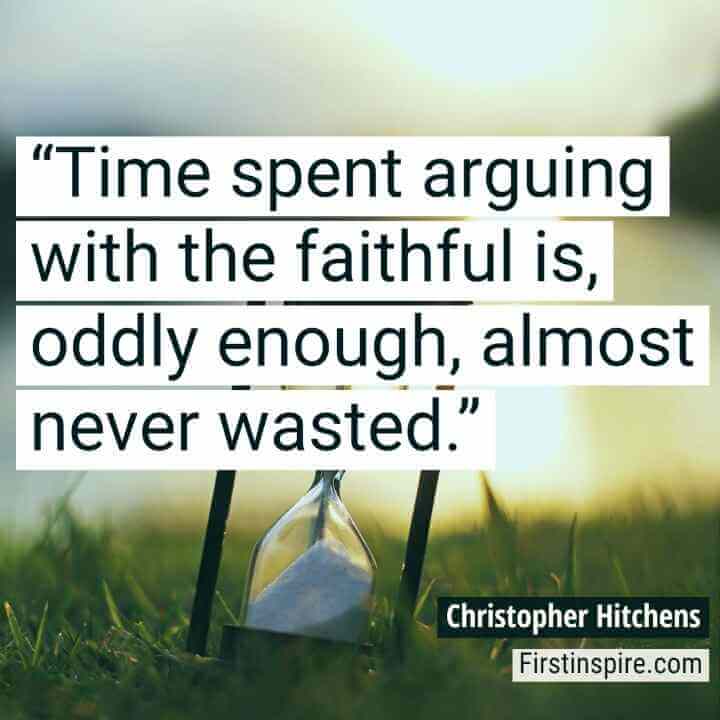 Christopher Eric Hitchens was an English-American author, journalist, and literary critic. He was a columnist for The Atlantic, Vanity Fair, Slate, World Affairs, Harpers Magazine, and The Nation. Here is a composition of Christopher Hitchens Quotes.

Hitchens gained fame in the 1990s as a contrarian who took on the likes of Mother Teresa and Bill Clinton from the left while praising Margaret Thatcher from the right. He published over a dozen books including bestsellers God is Not Great: How Religion Poisons Everything and Hitch 22: A Memoir. He was also known for his debates on religion with Christian apologists such as William F. Buckley Jr., James D. White, Douglas Wilson, and Dinesh D’Souza.

“I’m not afraid of being dead, that’s to say there’s nothing to be afraid of. I won’t know I’m dead, would be my strong conviction. And if I find that I’m alive in any way at all, that’ll be a pleasant surprise. I quite like surprises.”

“One can’t live without fear, it’s a question of what is your attitude towards fear? I’m afraid of a sordid death. I’m afraid that I will die in an ugly or squalid way, and cancer can be very vigorous in that respect.”

“If people I’ve never met or don’t know say that what I’ve written or done or said means anything to them, then I’m happy to take it at face value, for once. It cheers me up.”

“High moral character is not a precondition for great moral accomplishments.”

“I have a strong constitution which has served me quite well, though if I hadn’t had such a strong one I might have led a more healthy life perhaps.”

“Human beings are pattern-seeking animals who will prefer even a bad theory or a conspiracy theory to no theory at all.”

“Human decency is not derived from religion. It precedes it.”

“Never be a spectator of unfairness or stupidity. Seek out argument and disputation for their own sake; the grave will supply plenty of time for silence.”

“Violent, irrational, intolerant, allied to racism and tribalism and bigotry, invested in ignorance and hostile to free inquiry, contemptuous of women and coercive toward children: organized religion ought to have a great deal on its conscience.”

“I burned the candle at both ends and it often gave a lovely light.”

“Thanks to the telescope and the microscope, religion no longer offers an explanation for anything important.”

“The person who is certain, and who claims divine warrant for his certainty, belongs now to the infancy of our species.”

“Everybody does have a book in them, but in most cases that’s where it should stay.”

“Once you assume a creator and a plan, it makes us objects in a cruel experiment whereby we are created sick and commanded to be well.”

“There are all kinds of stupid people that annoy me but what annoys me most is a lazy argument.”

“I’ve had some dark nights of the soul, of course, but giving in to depression would be a sellout, a defeat.”

“I’ve had some dark nights of the soul, of course, but giving in to depression would be a sellout, a defeat.”

“A life that partakes even a little of friendship, love, irony, humor, parenthood, literature, and music, and the chance to take part in battles for the liberation of others cannot be called ‘meaningless’…”

“Literature, not scripture, sustains the mind and – since there is no other metaphor – also the soul.”

“Don’t take refuge in the false security of consensus.”

“I still make sure to go, at least once every year, to a country where things cannot be taken for granted, and where there is either too much law and order or too little.”

“I have tried for much of my life to write as if I was composing my sentences to be read posthumously.”

“What is your idea of earthly happiness? To be vindicated in my own lifetime.”

“The struggle for a free intelligence has always been a struggle between the ironic and the literal mind.”

“The essence of the independent mind lies not in what it thinks, but in how it thinks.”

“There can be no progress without head-on confrontation.”

“Hardest of all, as one becomes older, is to accept that sapient remarks can be drawn from the most unwelcome or seemingly improbable sources, and that the apparently more trustworthy sources can lead one astray.”

“Arguments that explain everything… explain nothing”

“The moment of near despair is quite often the moment that precedes courage.”

“The one unforgivable sin is to be boring.”