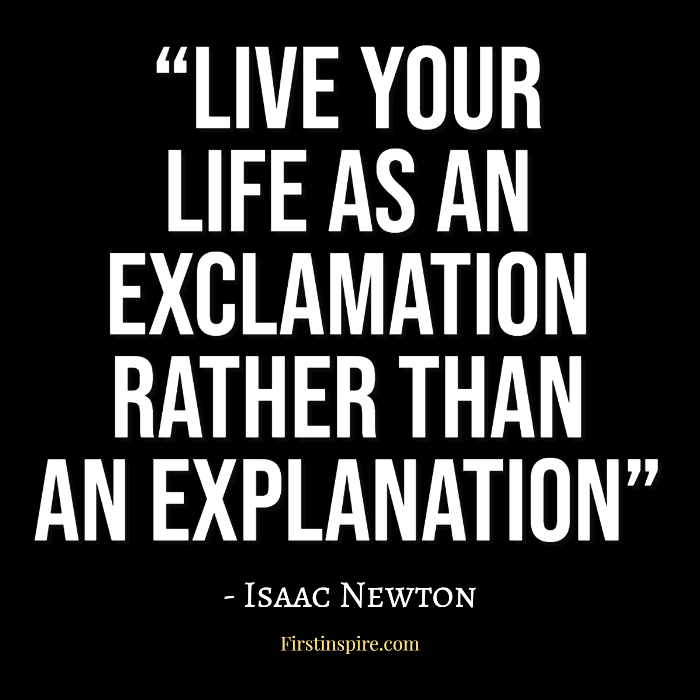 Sir Isaac Newton PRS was an English mathematician, physicist, astronomer, theologian, and author (described in his time as a “natural philosopher”) widely recognized as one of the greatest mathematicians and physicists of all time and among the most influential scientists. He was a key figure in the philosophical revolution known as the Enlightenment. His book Philosophiæ Naturalis Principia Mathematica (Mathematical Principles of Natural Philosophy), first published in 1687, established classical mechanic. Here are some Isaac Newton Quotes.

“We build too many walls and not enough bridges.”

“Gravity explains the motions of the planets, but it cannot explain who sets the planets in motion.”

“This most beautiful system of the sun, planets and comets, could only proceed from the counsel and dominion of an intelligent and powerful Being.”

“Trials are medicines which our gracious and wise Physician prescribes because we need them; and he proportions the frequency and weight of them to what the case requires. Let us trust his skill and thank him for his prescription.”

“Nature is pleased with simplicity. And nature is no dummy”

“Truth is ever to be found in the simplicity, and not in the multiplicity and confusion of things.”

“To myself I am only a child playing on the beach, while vast oceans of truth lie undiscovered before me”

“In the absence of any other proof, the thumb alone would convince me of God’s existence.”

“Atheism is so senseless. When I look at the solar system, I see the earth at the right distance from the sun to receive the proper amounts of heat and light. This did not happen by chance.”

“I have a fundamental belief in the Bible as the Word of God, written by those who were inspired. I study the Bible daily.”

“We account the Scriptures of God to be the most sublime philosophy.”

“If others would think as hard as I did, then they would get similar results.”

“Impressed force is the action exerted on a body to change its state either of resting or of moving uniformly straight forward.”

“Tact is the art of making a point without making an enemy.”

“OUR ORDINATION: Sir Isaac Newton, 1642 â€“ 1747 About the times of the End, a body of men will be raised up who will turn their attention to the prophecies, and insist upon their literal interpretation, in the midst of much clamor and opposition.”

“If I have seen further than others, it is by standing upon the shoulders of giants.”

“There are more sure marks of authenticity in the Bible than in any profane history.”

“God created everything by number, weight and measure.”

“The instinct of brutes and insects can be the effect of nothing else than the wisdom and skill of a powerful ever-living agent.”

“If I am anything, which I highly doubt, I have made myself so by hard work.”

“I shall not mingle conjectures with certainties.”

“Nature is very consonant and conformable with herself.”

“It is the weight, not numbers of experiments that is to be regarded.”

“If I have done the public any service, it is due to my patient thought.”

“No great discovery was ever made without a bold guess.”

“Philosophy is such an impertinently litigious lady that a man had as good be engaged in lawsuits as have to do with her.”

“The changing of Bodies into Light, and Light into Bodies, is very conformable to the Course of Nature, which seems delighted with Transmutations.”

“Sir Isaac Newton was asked how he discovered the law of gravity. He replied, “By thinking about it all the time.”

“We are to admit no more causes of natural things than such as are both true and sufficient to explain their appearances.”

“What we know is a drop, what we don’t know is an ocean.”

“If I have ever made any valuable discoveries, it has been due more to patient attention, than to any other talent”

“Live your life as an Exclamation rather than an Explanation”

“To every action there is always opposed an equal reaction.”