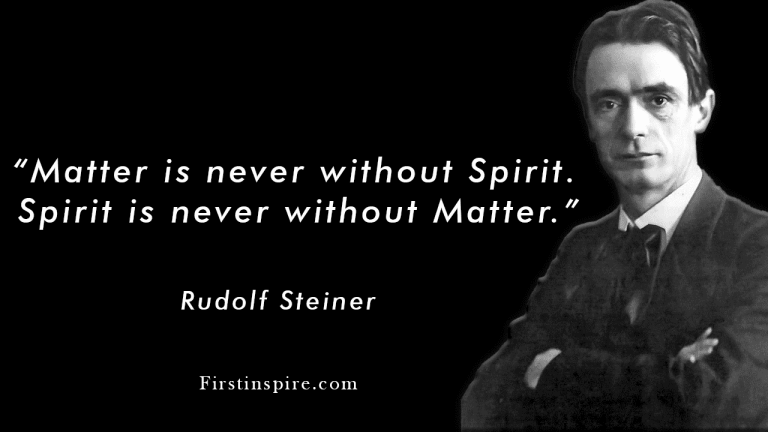 We all know the story of Rudolph the Red-Nosed Reindeer, but what about Rudolf Steiner? Rudolf Steiner was a philosopher, architect, and educator who founded the Anthroposophical Society in 1912. He believed that humans and animals had spiritual and physical bodies and that we could all share in human experiences.

He believed that we must become aware of our interconnectedness with the natural world and cultivate a reverence for it. He also believed that we should encourage children to explore their own creativity. Here are some Rudolf Steiner Quotes to show how he interacted with his environment and lived in tune with nature.

“May my soul bloom in love for all existence.”

“All real philosophers have been artists in the realm of concepts.”

“We are fully human only while playing, and we play only when we are human in the truest sense of the word.”

“You’ll be able to gain insight and reach a conclusion only by applying the powers of mind, intellect, soul, heart, spirit, and imagination. This is what ‘looking at something spiritually’ really means.”

“Every human being should show the greatest interest in beekeeping because our lives depend upon it.”

“For every human illness, somewhere in the world there exists a plant which is the cure.”

“All of nature begins to whisper its secrets to us through its sounds. Sounds that were previously incomprehensible to our soul now become the meaningful language of nature.”

“The time has come to realize that supersensible knowledge has now to arise from the materialistic grave.”

“A real medicine can only exist when it penetrates into a knowledge which embraces the human being in respect to body, soul and spirit.”

“The heart of the Waldorf method is that education is an art-it must speak to the child’s experience. To educate the whole child, his heart and his will must be reached, as well as the mind.”

“To be free is to be capable of thinking one’s own thoughts – not the thoughts merely of the body, or of society, but thoughts generated by one’s deepest, most original, most essential and spiritual self, one’s individuality.”

“Anthroposophy is not a game, nor just a theory; it is a task that must be faced for the sake of human evolution.”

“Today certain definite ideas are developing out of the Egyptian ideas. What is called Darwinism today did not arise because of external reasons. We are the same souls who, in Egypt, received the pictures of the animal forms of man’s forebears. The old views have awakened again, but man has descended more deeply into the material world.”

“Love is higher than opinion. If people love one another the most varied opinions can be reconciled – thus one of the most important tasks for humankind today and in the future is that we should learn to live together and understand one another. If this human fellowship is not achieved, all talk of development is empty.”

“Thinking… is no more and no less an organ of perception than the eye or ear. Just as the eye perceives colours and the ear sounds, so thinking perceives ideas”

“Just as in the body, eye and ear develop as organs of perception, as senses for bodily processes, so does a man develop in himself soul and spiritual organs of perception through which the soul and spiritual worlds are opened to him. For those who do not have such higher senses, these worlds are dark and silent, just as the bodily world is dark and silent for a being without eyes and ears.”

“Live through deeds of love, and let others live with tolerance for their unique intentions.”

“To truly know the world, look deeply within your own being; to truly know yourself, take real interest in the world.”

“You have no idea how unimportant is all that the teacher says or does not say on the surface, and how important what he himself is as teacher.”

“Reverence, enthusiasm, and a sense of guardianship, these three are actually the panacea, the magical remedy, in the soul of the educator and teacher.”

“When the past has taught us that we have more within us than we have ever used, our prayer is a cry to the divine to come to us and fill us with its power.”

“Love starts when we push aside our ego and make room for someone else.”

“If the blonds and blue-eyed people die out, the human race will become increasingly dense … Blond hair actually bestows intelligence. In the case of fair people, less nourishment is driven into the eyes and hair; it remains instead in the brain and endows it with intelligence. Brown- and dark-haired people drive the substances into their eyes and hair that the fair people retain in their brains.”

“Only when I follow my love for my objective is it I myself who act.”

“That which secures life from exhaustion lies in the unseen world, deep at the roots of things.”

“Reverence awakens in the soul a sympathetic power through which we attract qualities in the beings around us, which would otherwise remain concealed.”

“Geometry is knowledge that appears to be produced by human beings, yet whose meaning is totally independent of them.”

“In order to approach a creation as sublime as the Bhagavad-Gita with full understanding it is necessary to attune our soul to it.”

“You will not be good teachers if you focus only on what you do and not upon who you are.”

“Materialism has cast man into such depths that a mighty concentration of forces is necessary to raise him again. He is subject to illnesses of the nervous system which are veritable epidemics of the life of the soul.”

“What is necessary to keep providing good care to nature has completely fallen into ignorance during the materialism era.”