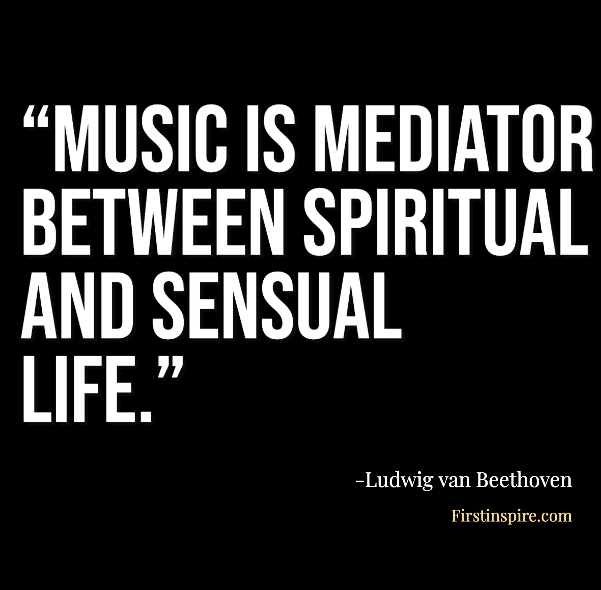 One of the most influential composers of all time, Ludwig van Beethoven was born in Bonn, Germany on December 16, 1770. His music changed the course of classical music with his innovative compositions. He was famous for his contributions to classical music, including symphonies, concertos, sonatas, string quartets, and other genres. He is widely regarded as one of the greatest composers in the history of music. Here are some Ludwig van Beethoven Quotes.

We have compiled some of the life quotes of Beethoven, which include his sayings about music, life in general, music quotes, and more. We hope you like these words of wisdom and motivating quotes from Beethoven.

“Music is the mediator between the spiritual and the sensual life.”

“Love demands all, and has a right to all.”

“Music is a higher revelation than all wisdom and philosophy.”

“To play without passion is inexcusable!”

“Art! Who comprehends her? With whom can one consult concerning this great goddess?”

“Nothing is more intolerable than to have to admit to yourself your own errors.”

“Music is a higher revelation than all wisdom and philosophy. Music is the electrical soil in which the spirit lives, thinks and invents.”

“I wish you music to help with the burdens of life ,and to help you release your happiness to others.”

“This is the mark of a really admirable man: steadfastness in the face of trouble.”

“Then let us all do what is right, strive with all our might toward the unattainable, develop as fully as we can the gifts God has given us, and never stop learning”

“What is to reach the heart must come from above; if it does not come from thence, it will be nothing but notes, body without spirit.”

“Tones sound, and roar and storm about me until I have set them down in notes.”

“Don’t only practise your art, but force your way into its secrets.”

“You ask me where I get my ideas. That I cannot tell you with certainty. They come unsummoned, directly, indirectly – I could seize them with my hands – out in the open air, in the woods, while walking, in the silence of the nights, at dawn, excited by moods which are translated by the poet into words, by me into tones that sound and roar and storm about me till I have set them down in notes.”

“I want to seize fate by the throat.”

“I can live only wholly with you or not at all.”

“A great poet is the most precious jewel of a nation.”

“Music should strike fire from the heart of man, and bring tears form the eyes of woman.”

“I have never thought of writing for reputation and honor. What I have in my heart must come out; that is the reason why I compose.”

“I will seize fate by the throat; it shall certainly never wholly overcome me.”

“Don’t only practice your art, but force your way into its secrets; art deserves that, for it and knowledge can raise man to the Divine.”

“Recommend to your children virtue; that alone can make them happy, not gold.”

“There is no loftier mission than to approach the Godhead more nearly than other mortals, and by means of that contact to spread the rays of the Godhead through the human race.”

“Artists who have won fame are often embarrassed by it; thus their first works are often their best.”

“He that divines the secret of my music is freed from the unhappiness that haunts the whole world of men.”

“I change many things, discard others, and try again and again until I am satisfied; then, in my head, I being to elaborate the work in its breadth, its narrowness, its height, its depth…I hear and see the image in front of me from every angle as if it had been cast and only the labour of writing it down remains.”

“There is no loftier mission than to approach the Divinity nearer than other men, and to disseminate the divine rays among mankind.”

“Fate gave to man the courage of endurance.”

“The amount of money one needs is terrifying…”

“The vibrations on the air are the breath of God speaking to man’s soul. Music is the language of God. We musicians are as close to God as man can be. We hear his voice, we read his lips, we give birth to the children of God, who sing his praise. That’s what musicians are.”

“Music is the one incorporeal entrance into the higher world of knowledge which comprehends mankind but which mankind cannot comprehend.”

“Music is the wine which inspires one to new generative processes, and I am Bacchus who presses out this glorious wine for mankind and makes them spiritually drunken.”

“My misfortune is doubly painful to me because it will result in my being misunderstood. For me there can be no recreation in the company of others, no intelligent conversation, no exchange of information with peers; only the most pressing needs can make me venture into society. I am obliged to live like an outcast.”

“One must not hold one’s self so divine as to be unwilling occasionally to make improvements in one’s creations.”

“Music is mediator between spiritual and sensual life.”

“I would rather write 10,000 notes than a single letter of the alphabet.”