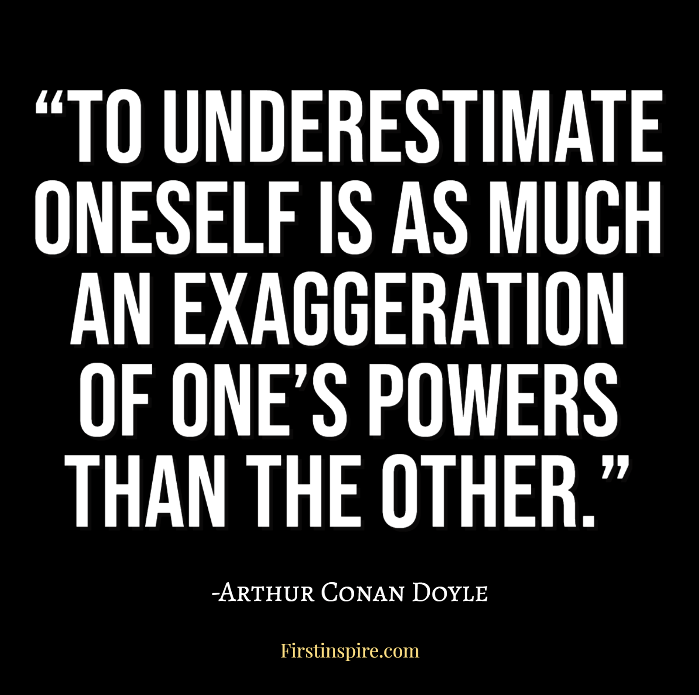 Sir Arthur Ignatius Conan Doyle KStJ DL was a British writer and physician. He created the character Sherlock Holmes in 1887 for A Study in Scarlet, the first of four novels and fifty-six short stories about Holmes and Dr. Watson. The Sherlock Holmes stories are milestones in the field of crime fiction. Here are some Arthur Conan Doyle Quotes.

“Ex-Professor Moriarty of mathematical celebrity… is the Napoleon of crime, Watson.”

“Mediocrity knows nothing higher than itself, but talent instantly recognizes genius.”

“It has long been an axiom of mine that the little things are infinitely the most important.”

“We can’t command our love, but we can our actions.”

“I consider that a man’s brain originally is like a little empty attic, and you have to stock it with such furniture as you choose.”

“There is no scent so pleasant to my nostrils as that faint, subtle reek which comes from an ancient book.”

“It may be that you are not yourself luminous, but that you are a conductor of light. Some people without possessing genius have a remarkable power of stimulating it.”

“The love of books is among the choicest gifts of the gods.”

“It is a great thing to start life with a small number of really good books which are your very own.”

“There is nothing more deceptive than an obvious fact.”

“To the man who loves art for its own sake, it is frequently in its least important and lowliest manifestations that the keenest pleasure is to be derived.”

“The ways of fate are indeed hard to understand. If there is not some compensation hereafter, then the world is a cruel jest.”

“Art in the blood is liable to take the strangest forms.”

“There are heroisms all round us waiting to be done.”

“It is stupidity rather than courage to refuse to recognize danger when it is close upon you.”

“The unexpected has happened so continually in my life that it has ceased to deserve the name.”

“Nothing clears up a case so much as stating it to another person.”

“So all life is a great chain, the nature of which is known whenever we are shown a link of it.”

“There is nothing more stimulating than a case where everything goes against you.”

“The Adventure of the Noble Bachelor”

“It is quite a three pipe problem, and I beg that you won’t speak to me for fifty minutes.”

“Eliminate all other factors, and the one which remains must be the truth.”

“I have my own views about Nature’s methods, though I feel that it is rather like a beetle giving his”

“The best way of successfully acting a part is to be it.”

“My mind rebels at stagnation, give me problems, give me work!”

“Education never ends, Watson. It is a series of lessons, with the greatest for the last.”

“For strange effects and extraordinary combinations we must go to life itself, which is always far more daring than any effort of the imagination.”

“A client is to me a mere unit, a factor in a problem.”

“Our ideas must be as broad as Nature if they are to interpret Nature.”

“Violence does, in truth, recoil upon the violent, and the schemer falls into the pit which he digs for another.”

“You have a grand gift for silence, Watson. It makes you quite invaluable as a companion.”

“Life is infinitely stranger than anything which the mind of man could invent.”

“To let the brain work without sufficient material is like racing an engine. It racks itself to pieces.”

“To underestimate oneself is as much an exaggeration of one’s powers than the other.”

“Depend upon it, there is nothing so unnatural as the commonplace.”

“Skill is fine, and genius is splendid, but the right contacts are more valuable than either.”

“The more featureless and commonplace a crime is, the more difficult it is to bring it home.”