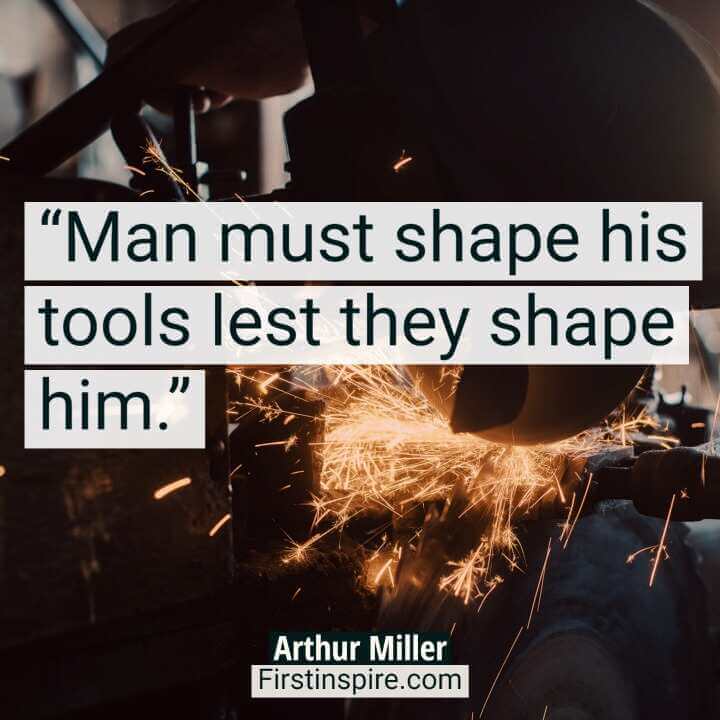 Arthur Miller is a playwright and novelist. He was born in New York City in 1915 and died in 2005.We have compiled some Arthur Miller Quotes for you. Before that we have a short biography about Arthur miller and his work.

His best-known novels are The Misfits, which tells the story of six people living in Nevada, just before the US enters World War II; The Price, about an aging couple who find themselves unable to pay their bills; Timebends, an autobiographical work that focuses on Miller’s youth as well as his years.

“I think the job of the artist is to remind people of what they have chosen to forget.”

“Maybe all one can do is hope to end up with the right regrets.”

“Don’t be seduced into thinking that that which does not make a profit is without value.”

“In a dream, we are simply confronted with various loaded symbols, and where one is exhausted, it gives way to another.”

“An era can be said to end when its basic illusions are exhausted.”

“The structure of a play is always the story of how the birds came home to roost.”

“The theater is so endlessly fascinating because it’s so accidental. It’s so much like life.”

“Theater is a very changeable art. It responds to the moment in history the way the newspaper does, and there’s no predicting what to come up with next.”

“People do look to others for some leadership, and it’s not bad for them to supply it when they feel that way.”

“Until an hour before the Devil fell, God thought him beautiful in Heaven.”

“Can anyone remember love? It’s like trying to summon up the smell of roses in a cellar. You might see a rose, but never the perfume.”

“Betrayal is the only truth that sticks.”

“Never fight fair with a stranger, boy. You’ll never get out of the jungle that way.”

“Everybody likes a kidder, but nobody lends him money.”

“A good newspaper, I suppose, is a nation talking to itself.”

“When today fails to offer the justification for hope, tomorrow becomes the only grail worth pursuing.”

“The best work that anybody ever writes is the work that is on the verge of embarrassing him, always.”

“Great drama is great questions or it is nothing but technique. I could not imagine a theater worth my time that did not want to change the world.”

“I think it’s a mistake to ever look for hope outside of one’s self.”

“Just remember, kid, you can quicker get back a million dollars that was stole than a word that you gave away.”

“If you analyse anything, you destroy it.”

“Man must shape his tools lest they shape him.”

“The job is to ask questions-it always was-and to ask them as inexorably as I can. And to face the absence of precise answers with a certain humility.”

“I regard the theatre as a serious business, one that makes or should make man more human, which is to say, less alone.”

“Everything we are is at every moment alive in us.”

“The famous are balloons far up in the sky, to be envied for their quiet freedom or shot down as enemies.”

“Down deep in His heart God is a comedian who loves to make us laugh.”

“Be liked and you will never want.”

“I cannot sleep for dreaming; I cannot dream but I wake and walk about the house as though I’d find you coming through some door.”

“You cant get very far in this world without your dossier being there first.”

“The need of man to wholly realize himself is the only fixed star.”

“The world is always ending; the exact date depends on when you came into it.”

“You specialize in something until one day it is specializing in you.”

“The camera has its own kind of consciousness; in the lens the Garden of Eden itself would become ever so slightly too perfect.”