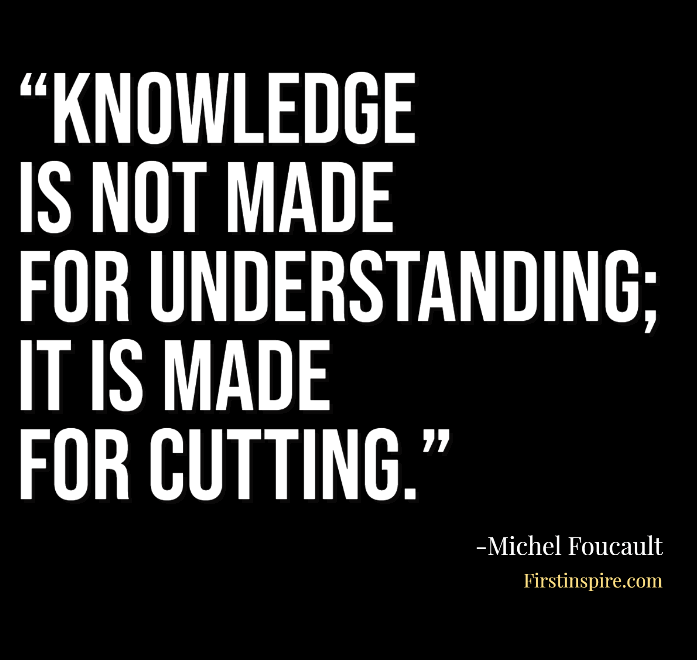 Michel Foucault was one of the most important figures in the history of philosophy, literature, and social sciences. He was born October 15th 1926 and died on June 25th 1984. He was a French philosopher who has had a major impact on the humanities. In this post, we will examine some Michel Foucault Quotes that are worth remembering.

Foucault’s work has had a major impact on intellectual discourse and his ideas continue to be influential in many contemporary fields such as sociology, cultural studies, literary theory, feminism, queer theory, postmodernism, law and governmentality. Michel Foucault on power and knowledge is very strongly felt through out his years.

He was an outspoken critic of the modern social sciences and the human sciences. His ideas were also controversial because they questioned many fundamental concepts like: -What is Truth? -Who should be held responsible for what? -How do we form our own selves? -“What can we do?”. So we have included michel foucault on power.

“The practice of S/M is the creation of pleasure…. And that’s why S/M is really a subculture. It’s a process of invention. S/M is the use of a strategic relationship as a source of pleasure.”

“One thing in any case is certain: man is neither the oldest nor the most constant problem that has been posed for human knowledge.”

“I don’t feel that it is necessary to know exactly what I am. The main interest in life and work is to become someone else that you were not in the beginning.”

“Where there is power, there is resistance.”

“Do not ask who I am and do not ask me to remain the same. More than one person, doubtless like me, writes in order to have no face.”

“Do not ask who I am and do not ask me to remain the same.”

“Death left its old tragic heaven and became the lyrical core of man: his invisible truth, his visible secret.”

“It is meaningless to speak in the name of – or against – Reason, Truth, or Knowledge.”

“Is it surprising that prisons resemble factories, schools, barracks, hospitals, which all resemble prisons?”

“The imaginary is not formed in opposition to reality as its denial or compensation; it grows among signs, from book to book, in the interstice of repetitions and commentaries; it is born and takes shape in the interval between books. It is the phenomena of the library.”

“Are the prisons overpopulated, or is the population over-imprisoned ?”

“As the archaeology of our thought easily shows, man is an invention of recent date. And one perhaps nearing its end.”

“The lyricism of marginality may find inspiration in the image of the outlaw, the great social nomad, who prowls on the confines of a docile, frightened order.”

“A critique is not a matter of saying that things are not right as they are. It is a matter of pointing out on what kinds of assumptions, what kinds of familiar, unchallenged, unconsidered modes of thought the practices that we accept rest.”

“I’m no prophet. My job is making windows where there were once walls.”

“Do not think that one has to be sad in order to be militant, even though the thing one is fighting is abominable.”

“Sexuality is a part of our behavior. It’s part of our world freedom. Sexuality is something that we ourselves create. It is our own creation, and much more than the discovery of a secret side of our desire. We have to understand that with our desires go new forms of relationships, new forms of love, new forms of creation. Sex is not a fatality; it’s a possibility for creative life. It’s not enough to affirm that we are gay but we must also create a gay life.”

“During the years 1945-1965 (I am referring to Europe), there was a certain way of thinking correctly, a certain style of political discourse, a certain ethics of the intellectual. One had to be on familiar terms with Marx, not let one’s dreams stray too far from Freud…. These were the requirements that made the strange occupation of writing and speaking a measure of truth about oneself and one’s time acceptable.”

“I wasn’t always smart, I was actually very stupid in school [T]here was a boy who was very attractive who was even stupider than I was. And in order to ingratiate myself with this boy who was very beautiful, I began to do his homework for him â€“ and that’s how I became smart, I had to do all this work to just keep ahead of him a little bit, in order to help him. In a sense, all the rest of my life I’ve been trying to do intellectual things that would attract beautiful boys.”

“What strikes me is the fact that in our society, art has become something which is only related to objects, and not to individuals, or to life.”

“What strikes me is the fact that in our society, art has become something which is related only to objects and not to individuals, or to life. That art is something which is specialized or which is done by experts who are artists. But couldn’t everyone’s life become a work of art? Why should the lamp or the house be an art object, but not our life?”

“The soul is the prison of the body.”

“What desire can be contrary to nature since it was given to man by nature itself?”

“What is peculiar to modern societies is not that they consigned sex to a shadow existence, but that they dedicated themselves to speaking of it ad infinitum, while exploiting it as the secret.”

“The intellectual was rejected and persecuted at the precise moment when the facts became incontrovertible, when it was forbidden to say that the emperor had no clothes.”

“In civilizations without boats, dreams dry up, espionage takes the place of adventure and the police take the place of pirates.”

“Knowledge is not made for understanding; it is made for cutting.”

“Do not ask who I am and do not ask me to remain the same: leave it to our bureaucrats and our police to see that our papers are in order. At least spare us their morality when we write.”

“From the idea that the self is not given to us, I think there is only one practical consequence: we have to create ourselves as a work of art.”

“What I seek is a permanent opening of possibilities.”

“The relationship between knowledge and power is not that between two opposites, nor that of two symmetrical poles, but rather that between two correlative poles. Knowledge only becomes ‘power’ when it takes hold of economic and political mechanisms, when it intervenes in a determinate field with a certain efficacy and intensity, when it succeeds in subjugating or constituting subjects after having first constituted or identified objects.”

“Let us say that we are obliged to produce the truth by the power that demands truth and needs it in order to function: we are forced to tell the truth, we are constrained, we are condemned to admit the truth or to discover it.”

“Withdraw allegiance from the old categories of the Negative (law, limit, castration, lack, lacuna), which the Western thought has so long held sacred as a form of power and an access to reality. Prefer what is positive and multiple, difference over uniformity, flows over unities, mobile arrangements over systems. Believe that what is productive is not sedentary but nomadic.”

“’Truth’ is to be understood as a system of ordered procedures for the production, regulation, distribution, circulation and operation of statements. ‘Truth’ is linked in a circular relation with systems of power which produce and sustain it, and to effects of power which it induces and which extend it. A ‘regime’ of truth.”

“There is no power relation without the correlative constitution of a field of knowledge, nor any knowledge that does not presuppose and constitute at the same time power relations”