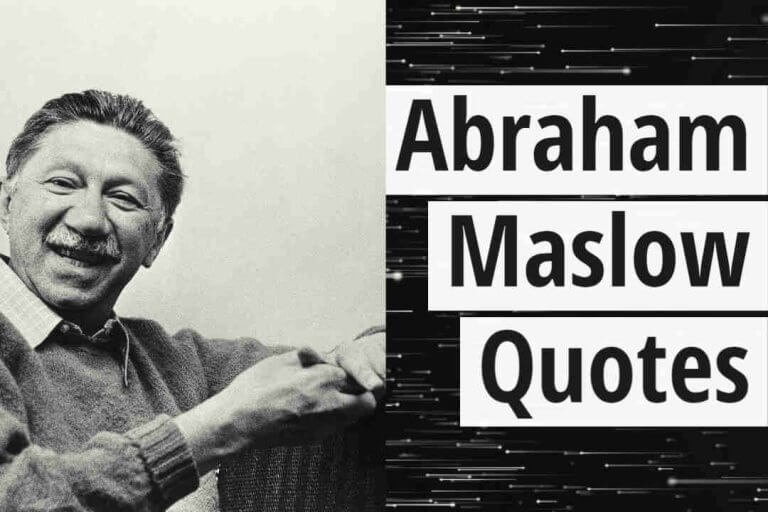 Abraham Maslow was an American psychologist who studied human behavior and motivation. He is best known for his theory of a hierarchy of needs. Here are some Abraham Maslow Quotes.

Maslow’s hierarchy of needs is a theory in psychology that states that people are motivated by unsatisfied needs at lower levels to satisfy the needs at higher levels, and once all the higher-level needs are satisfied, people will no longer feel motivated by the lower-level ones.

“The ability to be in the present moment is a major component of mental wellness.”

“If you only have a hammer, you tend to see every problem as a nail.”

“What is necessary to change a person is to change his awareness of himself.”

“If you plan on being anything less than you are capable of being, you will probably be unhappy all the days of your life.”

“The most beautiful fate, the most wonderful good fortune that can happen to any human being, is to be paid for doing that which he passionately loves to do.”

“If I were dropped out of a plane into the ocean and told the nearest land was a thousand miles away, I’d still swim. And I’d despise the one who gave up.”

“One’s only failure is failing to live up to one’s own possibilities.”

“The fact is that people are good, Give people affection and security, and they will give affection and be secure in their feelings and their behavior.”

“One of the goals of education should be to teach that life is precious.”

“No psychological health is possible unless this essential care of the person is fundamentally accepted, loved and respected by others and by himself.”

“One cannot choose wisely for a life unless he dares to listen to himself, his own self, at each moment of his life.”

“One can go back toward safety or forward toward growth.”

“Quitting smoking can be a very good test of ones character. Pass the test and you will have accomplished so much more than just get rid of one bad habit”

“Human nature has been sold short…[humans have] a higher nature which…includes the need for meaningful work, for responsibility, for creativeness, for being fair and just, for doing what is worthwhile and for preferring to do it well.”

“We fear to know the fearsome and unsavory aspects of ourselves, but we fear even more to know the godlike in ourselves.”

“The story of the human race is the story of men and women selling themselves short.”

“I was awfully curious to find out why I didn’t go insane.”

“The study of crippled, stunted, immature, and unhealthy specimens can yield only a cripple psychology and a cripple philosophy”

“It isn’t normal to know what we want. It is a rare and difficult psychological achievement.”

“Be independent of the good opinion of other people.”

“To the man who only has a hammer, everything he encounters begins to look like a nail.”

“Every person is, in part, ‘his own project’ and makes himself.”

“We fear our highest possibility. We are generally afraid to become that which we can glimpse in our most perfect moments.”

“The only happy people I know are the ones who are working well at something they consider important.”

“The human being is so constructed that he pressed toward fuller and fuller being.”

“When we free ourselves from the constraints of ordinary goals and uninformed scoffers we will find ourselves roaring off the face of the earth.”

“It is vital that people “count their blessings:” to appreciate what they possess without having to undergo its actual loss.”

“Apparently one impression we are making… is that creativeness consists of lightning striking you on the head in one great glorious moment.”

“Language can be a way of hiding your thoughts and preventing communication.”

“The fact that people who create are good workers tends to be lost.”

“Human beings seem to be far more autonomous and self-governed than modern psychological theory allows for.”

“Become aware of internal, subjective, sub-verbal experiences, so that these experiences can be brought into the world of abstraction…”

“Self-actualizing people must be what they can be.”

“Fear of knowing is very deeply a fear of doing.”

“Human nature is not nearly as bad as it has been thought to be.”