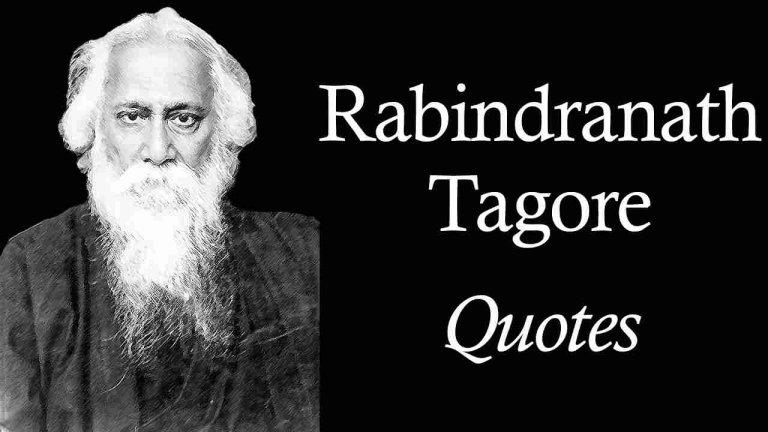 A man of outstanding literary and artistic achievement, Tagore played a leading role in the Indian cultural renaissance and was recognized, along with Mohandas Gandhi, as one of the architects of modern India. In 1913, Tagore received the Nobel Prize in Literature for his work Gitanjali. This made his works world-famous, and his fame spread throughout the world. we have compiled some Rabindranath Tagore Quotes.

Tagore was mainly known for his poetry, which was heavily influenced by the mysticism of the Hindu Upanishads, yet accessible to many Western readers at the same time. Although Tagore wrote successfully in all literary genres, he was first and foremost a poet.

He established a solid reputation as a poet and author both in England and the United States through the international publication of Song Offerings (Gitanjali). As a writer, Tagore worked mainly in Bengali, but after his success with Gitanjali, he translated many of his other writings into English. Bringing his style of writing, he made people pay attention not only to his works but also to the works of ancient Indian poets.

Tagore’s 60-year career not only tells of his personal growth and versatility but also reflects on the artistic, cultural, and political changes in India in the late 19th and early 20th centuries. Tagore’s work in multicultural education inspired many, including his friend Count Hermann Katherine of Estonia. Earl Keyserling founded his school in 1920, modeled after the Tagore School and the ancient universities that existed in northern India under Buddhist rule more than 2,000 years ago, under the name “School of Wisdom”.

As a writer of short stories, Tagore was not only a pioneer of Bengali literature but also paved the way for contemporary writers such as Premchand and contemporary writers such as Mulk Raj Anand, Raja Rao, and R.K. Narain. In addition to poetry, Tagore wrote many novels, short stories, and dramas. Although the Nobel laureate poet Tagore had a preference for poetry, he also made notable contributions to literature as a playwright, novelist, short story writer, and prose writer, especially essays, criticism, philosophical treatises, newspapers, memoirs, and letters. In addition, he distinguished himself as a musician, artist, actor-producer-director, teacher, patriot, and social reformer.

“If you cry because the sun has gone out of your life, your tears will prevent you from seeing the stars.”

“You can’t cross the sea merely by standing and staring at the water.”

“It is very simple to be happy, but it is very difficult to be simple.”

“Clouds come floating into my life, no longer to carry rain or usher storm, but to add color to my sunset sky.”

“Reach high, for stars lie hidden in you. Dream deep, for every dream precedes the goal.”

“The butterfly counts not months but moments, and has time enough.”

“I seem to have loved you in numberless forms, numberless times, in life after life, in age after age forever.”

“Death is not extinguishing the light; it is only putting out the lamp because the dawn has come.”

“A mind all logic is like a knife all blade. It makes the hand bleed that uses it.”

“Most people believe the mind to be a mirror, more or less accurately reflecting the world outside them, not realizing on the contrary that the mind is itself the principal element of creation.”

“You smiled and talked to me of nothing and I felt that for this I had been waiting long.”

“Love is an endless mystery, because there is no reasonable cause that could explain it.”

“Let my thoughts come to you, when I am gone, like the afterglow of sunset at the margin of starry silence.”

“Everything comes to us that belongs to us if we create the capacity to receive it.”

“The stars are not afraid to appear like fireflies.”

“The real frienship is like fluorescence, it shines better when everything has darken.”

“Trees are the earth’s endless effort to speak to the listening heaven.”

“The roots below the earth claim no rewards for making the branches fruitful.”

“Depth of friendship does not depend on length of acquaintance”

“Only in love are unity and duality not in conflict.”

“He who is too busy doing good finds no time to be good.”

“Never be afraid of the moments–thus sings the voice of the everlasting.”

“Let him only see the thorns who has eyes to see the rose.”

“The sparrow is sorry for the peacock at the burden of its tail.”

“Facts are many, but the truth is one.”

“Away from the sight of thy face my heart knows no rest nor respite, and my work becomes an endless toil in a shoreless sea of toil.”

“Pleasure is frail like a dewdrop, while it laughs it dies. But sorrow is strong and abiding. Let sorrowful love wake in your eyes.”

“The speech of my heart will be carried on in murmurings of a song.”

“What you are you do not see, what you see is your shadow.”

“The Stronger is the imagination the less imaginary it is”

“At the immortal touch of thy hands my little heart loses its limits in joy and gives birth to utterance ineffable.”

“If he is weak enough to grow smaller to fit himself to his covering, then it becomes a process of gradual suicide by shrinkage of the soul.”

“I cannot tell why this heart languishes in silence. It is for small needs it never asks, or knows or remembers.”

“Let me think that there is one among those stars that guides my life through the dark unknown.”

“The winds of grace are blowing all the time, but it is you that must raise your sails.”

“He who wants to do good, knocks at the gate; he who loves finds the gates open.”

“If you shed tears when you miss the sun, you also miss the stars”

“Let my love, like sunlight, surround you and yet give you illumined freedom.”

“For what are obstacles to the lower creatures are opportunities to the higher life of man.”