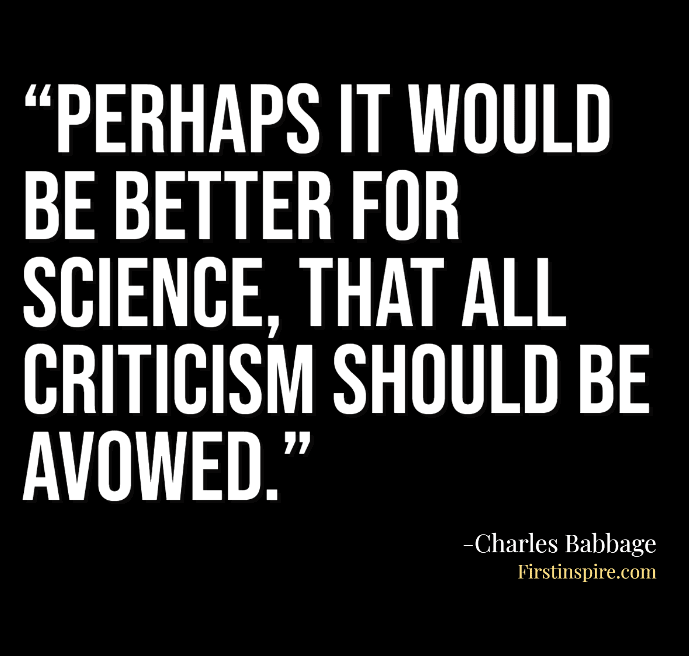 Charles Babbage was a mathematician and computer scientist. Even though he’s been credited as being the first person to have conceptualized a programmable computer, many people believe that his work was not fully recognized during his lifetime. Babbage’s goal was to create a machine that could perform calculations automatically without any human input or supervision. His design for this device is what we now call a computer. However, Babbage died before he could complete his plans to build this machine.

Despite never having built the machine he originally planned to build, Charles Babbage is still considered an important figure. We have included some famous Charles Babbage quotes that we hope will motivate you.

“The economy of human time is the next advantage of machinery in manufactures.”

“Errors using inadequate data are much less than those using no data at all.”

“Unless there exist peculiar institutions for the support of such inquirers, or unless the Government directly interfere, the contriver of a thaumatrope may derive profit from his ingenuity, whilst he who unravels the laws of light and vision, on which multitudes of phenomena depend, shall descend unrewarded to the tomb.”

“The whole of the developments and operations of analysis are now capable of being executed by machinery … As soon as an Analytical Engine exists, it will necessarily guide the future course of science.”

“For one person who is blessed with the power of invention, many will always be found who have the capacity of applying principles.”

“The difference between a tool and a machine is not capable of very precise distinction; nor is it necessary, in a popular explanation of those terms, to limit very strictly their acceptation.”

“At each increase of knowledge, as well as on the contrivance of every new tool, human labour becomes abridged.”

“The proportion between the velocity with which men or animals move, and the weights they carry, is a matter of considerable importance, particularly in military affairs.”

“Some kinds of nails, such as those used for defending the soles of coarse shoes, called hobnails, require a particular form of the head, which is made by the stroke of a die.”

“Surely, if knowledge is valuable, it can never be good policy in a country far wealthier than Tuscany, to allow a genius like Mr. Dalton’s, to be employed in the drudgery of elementary instruction.”

“In turning from the smaller instruments in frequent use to the larger and more important machines, the economy arising from the increase of velocity becomes more striking.”

“The fatigue produced on the muscles of the human frame does not altogether depend on the actual force employed in each effort, but partly on the frequency with which it is exerted.”

“The possessors of wealth can scarcely be indifferent to processes which, nearly or remotely have been the fertile source of their possessions.”

“Telegraphs are machines for conveying information over extensive lines with great rapidity.”

“Another mode of accumulating power arises from lifting a weight and then allowing it to fall.”

“A powerful attraction exists, therefore, to the promotion of a study and of duties of all others engrossing the time most completely, and which is less benefited than most others by any acquaintance with science.”

“I am inclined to attach some importance to the new system of manufacturing; and venture to throw it out with the hope of its receiving a full discussion among those who are most interested in the subject.”

“Those from whose pocket the salary is drawn, and by whose appointment the officer was made, have always a right to discuss the merits of their officers, and their modes of exercising the duties they are paid to perform.”

“A tool is usually more simple than a machine; it is generally used with the hand, whilst a machine is frequently moved by animal or steam power.”

“The half minute which we daily devote to the winding-up of our watches is an exertion of labour almost insensible; yet, by the aid of a few wheels, its effect is spread over the whole twenty-four hours.”

“Precedents are treated by powerful minds as fetters with which to bind down the weak, as reasons with which to mistify the moderately informed, and as reeds which they themselves fearlessly break through whenever new combinations and difficult emergencies demand their highest efforts.”

“The tastes and pursuits of manhood will bear on them the traces of the earlier impressions of our education. It is therefore not unreasonable to suppose that some portion of the neglect of science in England, may be attributed to the system of education we pursue.”

“A young man passes from our public schools to the universities, ignorant almost of the elements of every branch of useful knowledge.”

“Perhaps it would be better for science, that all criticism should be avowed.”

“If we look at the fact, we shall find that the great inventions of the age are not, with us at least, always produced in universities.”

“Whenever the work is itself light, it becomes necessary, in order to economize time, to increase the velocity.”

“Trimming consists of clipping off little bits here and there from those observations which differ most in excess from the mean, and in sticking them onto those which are too small; a species of ‘equitable adjustment,’ as a radical would term it, which cannot be admitted in science.”

“Mechanical Notation … I look upon it as one of the most important additions I have made to human knowledge. It has placed the construction of machinery in the rank of a demonstrative science. The day will arrive when no school of mechanical drawing will be thought complete without teaching it.”

“There are few circumstances which so strongly distinguish the philosopher, as the calmness with which he can reply to criticisms he may think undeservedly severe.”

“Miracles may be, for anything we know to the contrary, phenomena of a higher order of God’s laws, superior to, and, under certain conditions, controlling the inferior order known to us as the ordinary laws of nature.”

“If we define a miracle as an effect of which the cause is unknown to us, then we make our ignorance the source of miracles! and the universe itself would be a standing miracle. A miracle might be perhaps defined more exactly as an effect which is not the consequence or effect of any known laws of nature.”

“The triumph of the industrial arts will advance the cause of civilization more rapidly than its warmest advocates could have hoped, and contribute to the permanent prosperity and strength of the country far more than the most splendid victories of successful war.”

“Perhaps the most important principle on which the economy of a manufacture depends, is the division of labour amongst the persons who perform the work.”

“The errors which arise from the absence of facts are far more numerous and more durable than those which result from unsound reasoning respecting true data.”

“He will also find that the high and independent spirit, which usually dwells in the breast of those who are deeply versed in scientific pursuits, is ill adapted for administrative appointments; and that even if successful, he must hear many things he disapproves, and raise no voice against them.”

“The accumulation of skill and science which has been directed to diminish the difficulty of producing manufactured goods, has not been beneficial to that country alone in which it is concentrated distant kingdoms have participated in its advantages.”

“You will be able to appreciate the influence of such an Engine on the future progress of science. I live in a country which is incapable of estimating it.”

“To those who have chosen the profession of medicine, a knowledge of chemistry, and of some branches of natural history, and, indeed, of several other departments of science, affords useful assistance.”

“There is, however, another purpose to which academies contribute. When they consist of a limited number of persons, eminent for their knowledge, it becomes an object of ambition to be admitted on their list.”

“That the state of knowledge in any country will exert a directive influence on the general system of instruction adopted in it, is a principle too obvious to require investigation.”

“It will be readily admitted, that a degree conferred by an university, ought to be a pledge to the public that he who holds it possesses a certain quantity of knowledge.”

“The public character of every public servant is legitimate subject of discussion, and his fitness or unfitness for office may be fairly canvassed by any person.”

“That science has long been neglected and declining in England, is not an opinion originating with me, but is shared by many, and has been expressed by higher authority than mine.”

“It can happen to but few philosophers, and but at distant intervals, to snatch a science, like Dalton, from the chaos of indefinite combination, and binding it in the chains of number, to exalt it to rank amongst the exact. Triumphs like these are necessarily ‘few and far between.’”

“It is difficult to estimate the misery inflicted upon thousands of persons, and the absolute pecuniary penalty imposed upon multitudes of intellectual workers by the loss of their time, destroyed by organ-grinders and other similar nuisances.”

“The first steps in the path of discovery, and the first approximate measures, are those which add most to the existing knowledge of mankind.”