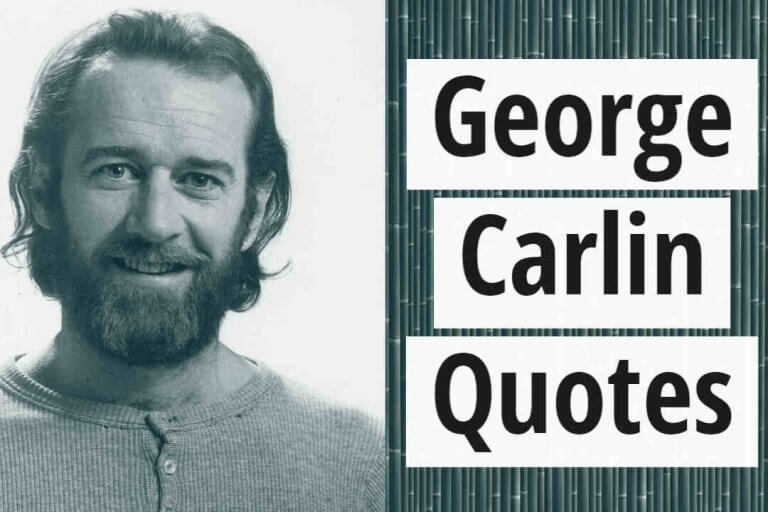 George Carlin was an American stand-up comedian and actor who passed away in 2008. His comedy routines were known for their black humor as well as commentary on the social, political, and cultural issues of the time. Here are some George Carlin Quotes.

He had a long and successful career in show business that spanned over six decades. With his dark humor, he was able to tackle sensitive subjects like religion, politics, sex, and drugs with no fear or regret.

George Carlin is considered one of the most influential comedians of all time. He has been called “the dean of counterculture comedians.”

“All the media and the politicians ever talk about is things that separate us, things that make us different from one another”

“The whole idea of the pursuit of goods and possessions has completely corrupted the human experience, along with religion, which I think limits the intellect.”

“Never underestimate the power of stupid people in large groups.”

“Voting is a meaningless exercise. I’m not going to waste my time with it. These parties, these politicians are given to us as a way of making us feel we have freedom of choice. But we don’t. Everything is done to you in this country.”

“Think of how stupid the average person is, and realize half of them are stupider than that.”

“Obviously, there are people who constrict themselves and build walls around themselves, whether it’s from a moral standpoint or a patriotic standpoint, or just plain old conformity, and who therefore live in those little prisons, and when things breach those walls, it’s shocking for them.”

“Inside every cynical person, there is a disappointed idealist.”

“Language is a tool for concealing the truth. If we could read each other’s minds, this would be a horror show.”

“Those who dance are considered insane by those who cannot hear the music.”

“Property is theft. Nobody “owns” anything. When you die, it all stays here.”

“I like my jokes to be built on a foundation of ideas, or at least smart observations.”

“The safest place to be during an earthquake would be in a stationary store.”

“Broadway isn’t a very big career move. There’s no money in it and it doesn’t mean anything to your career. It’s just a nice little jewel in the crown.”

“Conservatives say if you don’t give the rich more money, they will lose their incentive to invest. As for the poor, they tell us they’ve lost all incentive because we’ve given them too much money.”

“It’s a “keep your fingers crossed” business, the entertainment business.”

“Every person you look at, you can see the universe in their eyes, if you’re really looking”

“Some people think that words can injure the psyche or the moral fiber. And they really can’t.”

“Some people see the glass half full. Others see it half empty. I see a glass that’s twice as big as it needs to be.”

“I don’t consider myself a cynic. I think of myself as a skeptic and a realist.”

“A house is just a place to keep your stuff while you go out and get more stuff.”

“Comedy is a socially acceptable form of hostility and aggression. That is what comics do, stand the world upside down.”

“You can’t be the fastest gun in town forever. There comes a time when you’re not the golden boy, and you have to go off somewhere and figure yourself out.”

“What does it mean to pre-board? Do you get on before you get on?”

“If it’s true that our species is alone in the universe, then I’d have to say the universe aimed rather low and settled for very little.”

“Honesty may be the best policy, but it’s important to remember that apparently, by elimination, dishonesty is the second-best policy.”

“Laugh often, long and loud. Laugh until you gasp for breath.”

“The future will soon be a thing of the past.”

“Scratch any cynic and you will find a disappointed idealist.”

“The caterpillar does all the work, but the butterfly gets all the publicity.”

“We have multiplied our possessions, but reduced our values.”

“The secret of success is doing something you love, doing it well and being recognized for it”

“The day after tomorrow is the third day of the rest of your life.”

“Life is not measured by the breathes you take, but by the moments that take your breathe away”

“If a painting can be forged well enough to fool experts, why is the original so valuable?”

“There’s a humorous side to every situation. The challenge is to find it.”

“Most people work just hard enough not to get fired and get paid just enough money not to quit.”

“There’s no present. There’s only the immediate future and the recent past.”

“By and large, language is a tool for concealing the truth.”

“People who see life as anything more than pure entertainment are missing the point.”

“Give a man a fish and he will eat for a day. Teach him how to fish, and he will sit in a boat and drink beer all day.”

“Surround yourself with what you love.”

“Religion is like drugs, it destroys the thinking mind.”

“If you can’t say something nice about a person, go ahead”