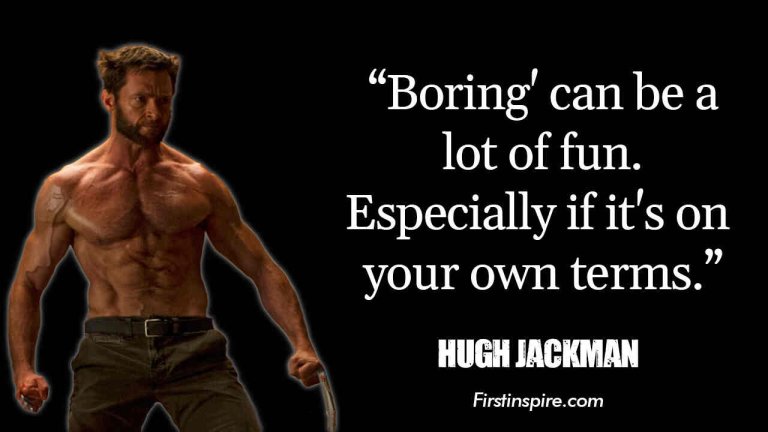 Hugh Michael Jackman is an Australian actor and producer. Jackman has won international recognition for his roles in major films, notably as superhero, period, and romance characters. Jackman has been nominated for two Academy Awards and won the Golden Globe Award for Best Actor – Motion Picture Musical or Comedy for his performance in The Greatest Showman (2017). He also received Golden Globe Award nominations for his roles in Les Misérables (2012) and Prisoners (2013). Here are some Hugh Jackman Quotes.

“Meditation is all about the pursuit of nothingness. It’s like the ultimate rest. It’s better than the best sleep you’ve ever had. It’s a quieting of the mind. It sharpens everything, especially your appreciation of your surroundings. It keeps life fresh.”

“I didn’t really know X-Men at all before I started. So I’d heard of this comic but I didn’t know it was as beloved or as iconic as I have now found out, but I just know fans are going to flip out at this.”

“To me, the smell of fresh-made coffee is one of the greatest inventions.”

“I think I may have been the only person to be rewarded charitably and get a tax deduction for swearing on film!”

“I meditated before I hosted the Oscars, I meditate before I go on stage, I meditate in the morning and lunchtime when I’m on a film set.”

“I always think the great parts outlive the actors that play them and that’s a stage tradition, that goes back hundreds of years and it should be that way.”

“I think adoption is a blessing all around when it’s done right.”

“Now I meditate twice a day for half an hour. In meditation, I can let go of everything. I’m not Hugh Jackman. I’m not a dad. I’m not a husband. I’m just dipping into that powerful source that creates everything. I take a little bath in it.”

“Giving people a hand up, not a handout, is the way forward.”

“Breakfast is my specialty. I admit it’s the easiest meal to cook, but I make everything with a twist, like lemon ricotta pancakes or bacon that’s baked instead of fried.”

“I’ve always felt that if you back down from a fear, the ghost of that fear never goes away. It diminishes people. So I’ve always said ‘yes’ to the thing I’m most scared about. The fear of letting myself down – of saying ‘no’ to something that I was afraid of and then sitting in my room later going, ‘I wish I’d had the guts to say this or that’ – that galvanizes me more than anything.”

“I feel so lucky to have both a son and a daughter, because there’s a different relationship with each of them.”

“To get down to the quick of it, respect motivates me – not success.”

“Now I meet people with full-color Wolverine tattoos on their backs. Thank God I did okay, because I think if I hadn’t, they’d spit on me in the street.”

“With age, you see people fail more. You see yourself fail more. How do you keep that fearlessness of a kid? You keep going. Luckily, I’m not afraid to make a fool of myself.”

“I was probably more scared of my high school exams than I was of the Oscars. At the time you think it’s everything and if you don’t do well, your life’s over. Opportunities are gone. So the more you do it, the less the fear is present.”

“To this day, I am the least materialistic person I know, because my father didn’t raise me to just go out and buy this or that car. The only reason I wanted to make money as an actor was because I’m passionate about food!”

“When I come home, my daughter will run to the door and give me a big hug, and everything that’s happened that day just melts away.”

“If you put Buddha, Jesus Christ, Socrates, Shakespeare, Arjuna, Krishna at a dinner table together, I can’t see them having an argument.”

“My gosh, I love food. If I wasn’t an actor, I could be a completely different body shape right now.”

“I truly believe that the job of an actor and the drive of an actor is simulating the internal journey in life which is to get deeper and deeper into our understanding of who we are.”

“A film is the director’s medium. The theater is an actor’s.”

“For me that’s one of the great indulgences in life – a hand-tailored suit, and a great pair of handmade shoes.”

“I have a wife and a son, but the gay rumors have started. I guess it’s a sign that I’m moving up the ladder.”

“I just love making a fool out of myself. I made my living as a clown at kids’ parties for about three years.”

“I think the most interesting question is, why do you act? I act because I have felt in acting some of the most free moments of my life…I think it’s also one thing that scares me the most.”

“I would love to have a robot at home.”

“I’m an actor who believes we all have triggers to any stage of emotion. It’s not always easy to find but it’s still there.”

“It dawned on me that acting was what I wanted to do with my life. Nothing had ever touched my heart like acting did.”

“At which point should we let go and do what we want to do, and when should we submit to rules? Coming to terms with our true natures and who we really are has always been a fascination to humans. I know it fascinates me.”

“I’ve always felt that if you back down from a fear, the ghost of that fear never goes away. It diminishes people.”

“Meditation has changed my life”

“The word philosophy sounds high-minded, but it simply means the love of wisdom. If you love something, you don’t just read about it; you hug it, you mess with it, you play with it, you argue with it.”

“I once sang ‘Summer Nights,’ from ‘Grease,’ at a bar in Melbourne with John Travolta, who’s a good friend of mine. He looked cool singing the part of Danny – sitting in an armchair, smoking a cigar – while I got stuck playing Sandy.”

“It’s always interesting – how do you actually convey thought through song? We’re used to the convention on stage. In film, we used to be used to it, and now sometimes it works and sometimes it doesn’t. You need to be fresh and really look at the material.”

“There is anxiety, but it comes after you’ve finished filming because it’s out of your hands; people are editing it, they’re cutting it, marketing it. And it’s… part your career sort of rides on that. But when you’re actually filming it’s a team thing and it really feels good there for me.”

“But in another world, another life, probably growing up in another country, I might have been more of a dancer.”

“I’m not a kid. You don’t get in this business for anonymity. It’s not like I have posters of myself on the wall, but at the same time, I’m kind of ready for a little bit of it, but I worry for my little one, and my family – their privacy. That’s what I’m more protective of.”

“I’m quite an independent person, and I had to be. As a boy and growing into a young man I had to look out for myself. And now I’m very family-oriented. It’s a big priority in my life.”

“When you’re playing an icon like Wolverine, it’s sometimes better to be someone that nobody knows because they don’t know what to expect. I don’t mind a little bit of anonymity; it helps on the subway.”

“Boring’ can be a lot of fun. Especially if it’s on your own terms.”

“I’m a mad lover of sport. You cannot say a bad word to me about sports. So I know business is involved and I know it can be cynical, and, of course, I watch it, but for me it’s pure.”

“Look, my philosophy in life is expect nothing and everything is a bonus.”

“Meditation is all about the pursuit of nothingness…”

“I’ve dreamt of being in a movie musical for a long time. For some reason I never even thought ‘Les Mis’ would be possible.”

“I can live with failure if it is born of conviction.”

“We have far more ability than we give ourselves credit for,”

“Luckily, I’m not afraid to make a fool of myself.”

“I treat auditions like I treated my first dates. It’s an opportunity to get to know a stranger and to learn from each other.”

“I have two kids, career and I travel, and I don’t think my life is any different than most couples. The most valuable commodity now for many people is time and how to parcel that out.”