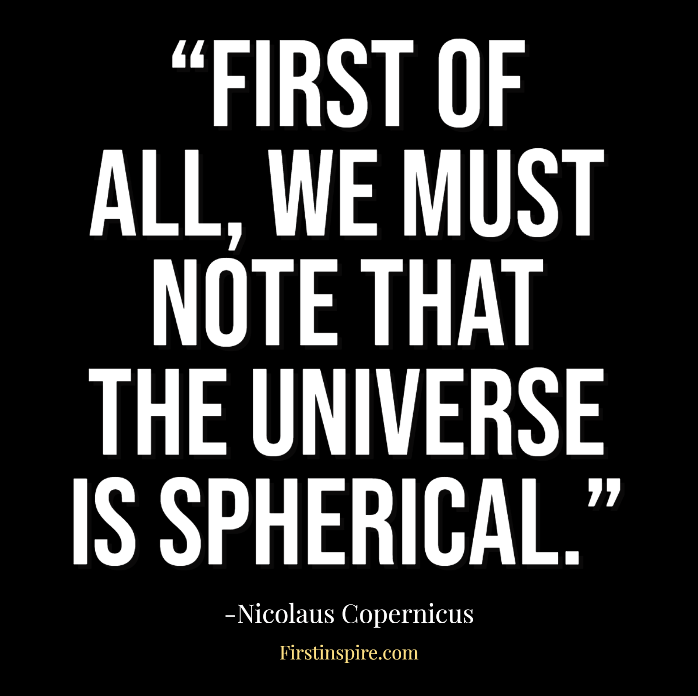 Nicolaus Copernicus was a Renaissance polymath, active as a mathematician, astronomer, and Catholic canon, who formulated a model of the universe that placed the Sun rather than Earth at its center. Here are some Nicolaus Copernicus Quotes.

“Of all things visible, the highest is the heaven of the fixed stars.”

“Those who know that the consensus of many centuries has sanctioned the conception that the earth remains at rest in the middle of the heavens as its center, would, I reflected, regard it as an insane pronouncement if I made the opposite assertion that the earth moves.”

“At rest, however, in the middle of everything is the sun.”

“The massive bulk of the earth does indeed shrink to insignificance in comparison with the size of the heavens.”

“To know the mighty works of God, to comprehend His wisdom and majesty and power; to appreciate, in degree, the wonderful workings of His laws, surely all this must be a pleasing and acceptable mode of worship to the Most High, to whom ignorance cannot be more grateful than knowledge.”

“For I am not so enamoured of my own opinions that I disregard what others may think of them.”

“Mathematics is written for mathematicians.”

“Among the authorities it is generally agreed that the Earth is at rest in the middle of the universe, and they regard it as inconceivable and even ridiculous to hold the opposite opinion. However, if we consider it more closely the question will be seen to be still unsettled, and so decidedly not to be despised. For every apparent change in respect of position is due to motion of the object observed, or of the observer, or indeed to an unequal change of both.”

“Finally we shall place the Sun himself at the center of the Universe.”

“I am aware that a philosopher’s ideas are not subject to the judgment of ordinary persons, because it is his endeavour to seek the truth in all things, to the extent permitted to human reason by God.”

“If there should chance to be any mathematicians who, ignorant in mathematics yet pretending to skill in that science, should dare, upon the authority of some passage of Scripture wrested to their purpose, to condemn and censure my hypothesis, I value them not, and scorn their inconsiderate judgement. De Revolutionibus Coelestibus”

“If there be some who, though ignorant of all mathematics . . . dare to reprove this work, because of some passage of Scripture, which they have miserably warped to their purpose, I regard them not, and even despise their rash judgement.”

“Every light has its shadow, and every shadow hath a succeeding morning.”

“Although all the good arts serve to draw man’s mind away from vices and lead it toward better things, this function can be more fully performed by this art, which also provides extraordinary intellectual pleasure.”

“Accordingly, since nothing prevents the earth from moving, I suggest that we should now consider also whether several motions suit it, so that it can be regarded as one of the planets. For, it is not the center of all the revolutions.”

“Therefore, having obtained the opportunity from these sources, I too began to consider the mobility of the earth.”

“The strongest affection and utmost zeal should, I think, promote the studies concerned with the most beautiful objects. This is the discipline that deals with the universe’s divine revolutions, the stars’ motions, sizes, distances, risings and settings . . . for what is more beautiful than heaven?”

“In the midst of all dwells the Sun. For who could set this luminary in another or better place in this most glorious temple, than whence he can at one and the same time brighten the whole.”

“Finally we shall place the Sun himself at the center of the Universe. All this is suggested by the system of procession of events and the harmony of the whole Universe, if only we face the facts, as they say, “with eyes wide open.””

“The scorn which I had reason to fear on account of the novelty and unconventionality of my opinion almost induced me to abandon completely the work which I had undertaken. . . . Astronomy is written for astronomers. To them my work too will seem, unless I am mistaken, to make some contribution.”

“So if the worth of the arts were measured by the matter with which they deal, this art-which some call astronomy, others astrology, and many of the ancients the consummation of mathematics-would be by far the most outstanding. This art which is as it were the head of all the liberal arts and the one most worthy of a free man leans upon nearly all the other branches of mathematics. Arithmetic, geometry, optics, geodesy, mechanics, and whatever others, all offer themselves in its service.”

“In first place we must observe that the universe is spherical. This is either because that figure is the most perfect, as not being articulated, but whole and complete in itself; or because it is the most capacious and therefore best suited for that which is to contain and preserve all things.”

“In the center of all rests the sun. For who would place this lamp of a very beautiful temple in another or better place that this wherefrom it can illuminate everything at the same time? As a matter of fact, not unhappily do some call it the lantern; others, the mind and still others, the pilot of the world. Trismegistus calls it a “visible God”; Sophocles’ Electra, “that which gazes upon all things.” And so the sun, as if resting on a kingly throne, governs the family of stars which wheel around.”

“Nations are not ruined by one act of violence, but gradually and in an almost imperceptible manner by the depreciation of their circulating currency, through its excessive quantity.”

“We are taught all this [the motion of the earth on its axis and around the sun] by the order of succession, in which those phenomena (various planetary happenings) follow each other, and by the harmony of the world, if we will only, as the saying goes, look at the matter with both eyes.”

“The two revolutions, I mean the annual revolutions of the declination and of the centre of the Earth, are not completely equal; that is the return of the declination to its original value is slightly ahead of the period of the centre. Hence it necessarily follows that the equinoxes and solstices seem to anticipate their timing, not because the sphere of the fixed stars moves to the east, but rather the equatorial circle moves to the west, being at an angle to the plane of the ecliptic in proportion to the declination of the axis of the terrestrial globe.”

“Since, then, there is no objection to the mobility of the Earth, I think it must now be considered whether several motions are appropriate for it, so that it can be regarded as one of the wandering stars. For the fact that it is not the centre of all revolutions is made clear by the apparent irregular motion of the wandering stars, and their variable distances from the Earth, which cannot be understood in a circle having the same centre as the Earth.”

“For a traveler going from any place toward the north, that pole of the daily rotation gradually climbs higher, while the opposite pole drops down an equal amount.”

“First of all, we must note that the universe is spherical.”

“So far as hypotheses are concerned, let no one expect anything certain from astronomy, which cannot furnish it, lest he accept as the truth ideas conceived for another purpose, and depart from this study a greater fool than when he entered it.”

“Therefore, when I considered this carefully, the contempt which I had to fear because of the novelty and apparent absurdity of my view, nearly induced me to abandon utterly the work I had begun.”

“Therefore I would not have it unknown to Your Holiness, the the only thing which induced me to look for another way of reckoning the movements of the heavenly bodies was that I knew that mathematicians by no means agree in their investigation thereof.”

“Therefore, in the course of the work I have followed this plan: I describe in the first book all the positions of the orbits together with the movements which I ascribe to the Earth, in order that this book might contain, as it were, the general scheme of the universe.”

“I therefore took this opportunity and also began to consider the possibility that the Earth moved. Although it seemed an absurd opinion, nevertheless, because I knew that others before me had been granted the liberty of imagining whatever circles they wished to represent the phenomena of the stars, I thought that I likewise would readily be allowed to test whether, by assuming some motion of the Earth’s, more dependable representations than theirs could be found for the revolutions of the heavenly spheres.”

“The earth together with its surrounding waters must in fact have such a shape as its shadow reveals, for it eclipses the moon with the arc of a perfect circle.”

“In so many and such important ways, then, do the planets bear witness to the earth’s mobility.”

“I shall now recall to mind that the motion of the heavenly bodies is circular, since the motion appropriate to a sphere is rotation in a circle.”

“Those things which I am saying now may be obscure, yet they will be made clearer in their proper place.”

“Moreover, since the sun remains stationary, whatever appears as a motion of the sun is really due rather to the motion of the earth.”

“I can easily conceive, most Holy Father, that as soon as some people learn that in this book which I have written concerning the revolutions of the heavenly bodies, I ascribe certain motions to the Earth, they will cry out at once that I and my theory should be rejected.”

“For it is the duty of an astronomer to compose the history of the celestial motions through careful and expert study.”

“So, influenced by these advisors and this hope, I have at length allowed my friends to publish the work, as they had long besought me to do.”

“More stars in the north are seen not to set, while in the south certain stars are no longer seen to rise.”

“We regard it as a certainty that the earth, enclosed between poles, is bounded by a spherical surface.”

“Pouring forth its seas everywhere, then, the ocean envelops the earth and fills its deeper chasms.”

“Hence I feel no shame in asserting that this whole region engirdled by the moon, and the center of the earth, traverse this grand circle amid the rest of the planets in an annual revolution around the sun. Near the sun is the center of the universe. Moreover, since the sun remains stationary, whatever appears as a motion of the sun is really due rather to the motion of the earth.”

“Astronomy is written for astronomers”

“Perhaps there will be prattlers who, although completely ignorant of mathematics, nevertheless take it upon themselves to pass judgment on mathematical questions, and on account of some passage in Scripture, badly distorted to their purpose, will dare to censure and assail what I have presented here.”

“For when a ship is floating calmly along, the sailors see its motion mirrored in everything outside, while on the other hand they suppose that they are stationary, together with everything on board. In the same way, the motion of the earth can unquestionably produce the impression that the entire universe is rotating.”