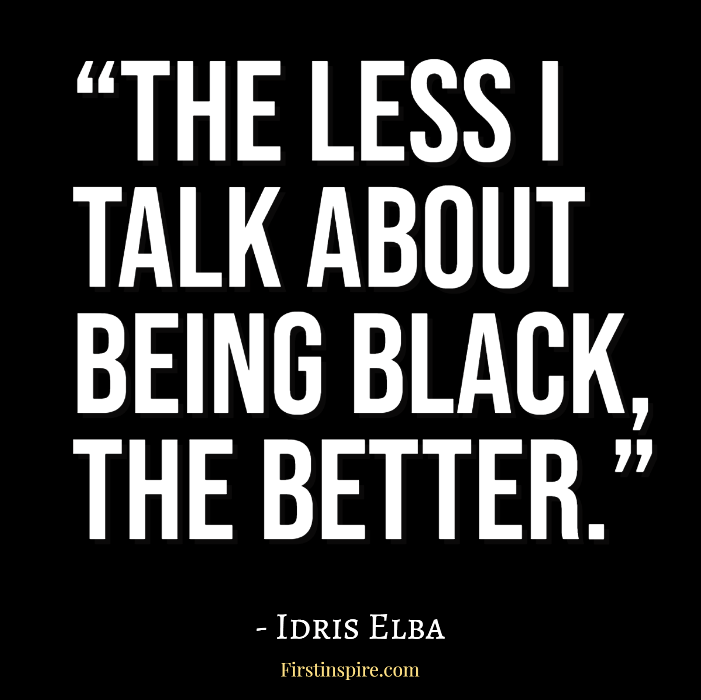 Idrissa Akuna Elba OBE is an English actor, producer and musician. He is known for roles including Stringer Bell in the HBO series The Wire, DCI John Luther in the BBC One series Luther, and Nelson Mandela in the biographical film Mandela: Long Walk to Freedom. Here are some Idris Elba Quotes.

“What an honor it was to step into the shoes of Nelson Mandela and portray a man who defied odds, broke down barriers, and championed human rights before the eyes of the world.”

“Television, for me, is a medium that I’m probably always going to be attached to, one way or another.”

“Waking up in TRUTH is so much better than living in a lie.”

“As much as it’s nice to step into that massive world of Hollywood and be a big, famous actor, I prefer the career of actors that have really chosen smartly and done really amazing performances. Maybe they’re not as known, but their careers are a bit more interesting.”

“I was in The Wire for three years, and I left at the highlight of that.”

“The less I talk about being black, the better.”

“Working at BBC, at the head of one of the top dramas, is a tradition for great actors.”

“My Father always told me that a fool at 40 is a fool for life.”

“People watch three or four episodes at a time of their shows.”

“In some countries, no one knows who Idris Elba is.”

“I love bikes. I used to own one, but I fell off it when I was younger and that was the end of my bike riding days until now.”

“I’m tactile, very tactile. A woman who has really nice, looked-after skin is such a turn-on for me. It’s always sexy.”

“I would never be fearful of any character.”

“I wasn’t bad at school, but I was never a bookworm.”

“I’ve never had to explain ‘Prometheus’ to people, ever. Most people get it.”

“It’s actually quite criminal how ‘The Wire’ was systematically ignored.”

“The English are good at bad guys – the James Bond-style villain, cunning, slow-burning. The Americans are much more obvious about it.”

“I’m rebelling against being handed a career, like, ‘You’re the next this; you’re the next that.’ I’m not the next anything, I’m the first me. I can’t be myself, I can’t just be Idris Elba. But that’s just the nature of the business.”

“I’d rather a young black actor read about success as opposed to how tough it was. I get these roles because I can act and that’s it. Hopefully that’s it.”

“I was into Spider Man when I was a kid and that was the only comic I’ve ever read.”

“I was always a real athletic kid. Then when I got older, I just figured it was part of life to keep training.”

“I’m a little sheepish about it. Whenever I meet fans and they’re like, ‘Oh, you’re so sexy,’ I just don’t get that. There’s no way one man can be universally sexy.”

“I try to fit in workouts whenever I can.”

“Africans, we hold on to our youths and whip them into shape.”

“As an actor, you’re trained to do the right thing, be politically correct, say your lines, say the right thing about the people you’re working with.”

“Every leading lady I work with, I’ll see if I can get a song out of them and put it on an album.”

“Every single film I’ve done, it’s about the character.”

“I’m an ambitious person. I never consider myself in competition with anyone, and I’m not saying that from an arrogant standpoint, it’s just that my journey started so, so long ago, and I’m still on it and I won’t stand still.”

“I did a rendition of ‘Billie Jean’ which is on my Soundcloud. I put it on Twitter, and it got about 3000 hits that day.”

“I don’t get recognized that much yet in London, but when I do I get a real sense of achievement.”

“I get criticized for taking roles in films like ‘Ghost Rider 2’, but if you look at my resume, dude, I’ve mixed it up as much as I can.”

“I tend to stay away from the comics.”

“I love to play different roles. That’s just the kind of actor I am.”

“I knew that if I wanted to be all I could be, I would have to go to the U.S. It took three years to get the accent right.”

“I’ve always been DJing; it’s just I’m making more of a push for it, making it more public.”

“If I was gonna go to jail, I don’t want to go to jail for stealing a bottle of water. I’ll steal that $20 million. At least then it was worth it.”

“It could be Grammy night, Oscar night, whatever – I don’t feel the pressure to be there.”
“The only thing I change mainly is my sneakers. I love sneakers. But everything’s sort of black or jeans. Jeans, always.”

“It’s weird because my parents don’t really understand my business. I get fan mail all day long, but if a piece happens to get to their house, they’re like, ‘Oh, my God, you’ve got a fan! You have to write them back. You have to do it!”

“I’m not interested in making all-black films – I come from a very diverse culture; I want to work with every type of person. I work a lot with women executives because they seem to be a lot more open minded about that and a lot more progressive in that way.”

“I was on a well-beaten path of actors – what we all call ‘the Law and Order route’. I spent two years of auditioning for everything… and then ‘The Wire’ came up.”

“If you go to Africa and you’re white, you’re probably not going to get that much work either. But the fact is that there is a longer history of black integration in the U.S. I don’t have any resentment about this: I did the maths, calculated it against my ambition and decided to leave England.”

“There has been a big debate about it: can a black man play a Nordic character?”

“I want to go to Sierra Leone with something – whether it’s some sort of contribution to healthcare, or to the entertainment industry. My cousin is a nurse; we are talking about opening a clinic.”

“Because I was big, I didn’t have to listen to anyone doubting me. I was just considered good at football or whatever, there were no questions about it.”

“I lived in America for a long time before I started working as an actor. Some actors show up on set and have never done an American accent before, so they rely on a slew of technical mechanisms. Part of what makes an accent is understanding why people speak that way – you have to understand the culture.”

“I think ‘The Wire’ really is relatable. It reflects an ongoing issue across America, about inaccuracies in major cities between rich and the poor and some of the things that go on behind the red tape of council and government bodies.”

“I think there’s a tendency for actors like myself, and I don’t mean to generalize myself, but I’ve played ‘men’s men,’ if you will, characters that are simmering rage and calculated. There’s a trend not to play anything that is opposed to that.”

“Yeah, I know, any time you hear an actor say, ‘I do music’, you cringe. But I want to be gradual with my music. I want to earn my stripes.”

“It was deeply important for me to understand where Mandela came from. Because we know where he was going, and that’s a famous story, but who was he? Where did he come from? What was his upbringing?”

“What really excites me in a project is when it goes in a way you haven’t been before.”
“There’s a fast-track if you can do the networking. For some personalities it works, but for mine it doesn’t.”