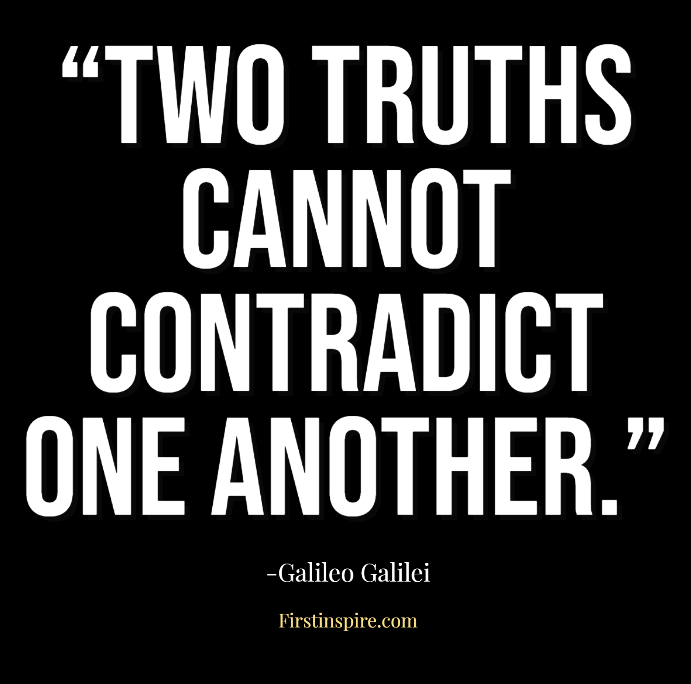 “I have never met a man so ignorant that I couldn’t learn something from him.”

“We cannot teach people anything; we can only help them discover it within themselves.”

“Mathematics is the language with which God has written the universe.”

“With regard to matters requiring thought: the less people know and understand about them, the more positively they attempt to argue concerning them.”

“It is a beautiful and delightful sight to behold the body of the Moon.”

“All truths are easy to understand once they are discovered; the point is to discover them.”

“If I were again beginning my studies, I would follow the advice of Plato and start with mathematics.”

“The sun, with all those planets revolving around it and dependent on it, can still ripen a bunch of grapes as if it had nothing else in the universe to do.”

“In questions of science, the authority of a thousand is not worth the humble reasoning of a single individual.”

“You cannot teach a man anything, you can only help him find it within himself.”

“It vexes me when they would constrain science by the authority of the Scriptures, and yet do not consider themselves bound to answer reason and experiment.”

“Long experience has taught me this about the status of mankind with regard to matters requiring thought: the less people know and understand about them, the more positively they attempt to argue concerning them, while on the other hand to know and understand a multitude of things renders men cautious in passing judgment upon anything new.”

“Infinities and indivisibles transcend our finite understanding, the former on account of their magnitude, the latter because of their smallness; Imagine what they are when combined.”

“I’ve loved the stars too fondly to be fearful of the night.”

“I do not think it is necessary to believe that the same God who has given us our senses, reason, and intelligence wished us to abandon their use, giving us by some other means the information that we could gain through them.”

“I do not feel obliged to believe that the same God who has endowed us with sense, reason, and intellect has intended us to forego their use.”

“Wine is sunlight, held together by water.”

“The surface of the Moon is not smooth, uniform, and precisely spherical as a great number of philosophers believe it to be, but is uneven, rough, and full of cavities and prominences, being not unlike the face of the Earth, relieved by chains of mountains and deep valleys.”

“Where the senses fail us, reason must step in.”

“By denying scientific principles, one may maintain any paradox.”

“Facts which at first seem improbable will, even on scant explanation, drop the cloak which has hidden them and stand forth in naked and simple beauty.”

“The Milky Way is nothing else but a mass of innumerable stars planted together in clusters.”

“If you could see the earth illuminated when you were in a place as dark as night, it would look to you more splendid than the moon.”

“Vision, I say, is related to light itself. But of this sensation and the things pertaining to it, I pretend to understand but little; and since even a long time would not suffice to explain that trifle, or even to hint at an explanation, I pass over this in silence.”

“In the sciences, the authority of thousands of opinions is not worth as much as one tiny spark of reason in an individual man.”

“Science proceeds more by what it has learned to ignore than what it takes into account.”

“The book of nature is written in the language of mathematics.”

“It is surely harmful to souls to make it a heresy to believe what is proved.”

“Spots are on the surface of the solar body where they are produced and also dissolved, some in shorter and others in longer periods. They are carried around the Sun; an important occurrence in itself.”

“Nothing occurs contrary to nature except the impossible, and that never occurs.”

“The doctrine that the earth is neither the center of the universe nor immovable, but moves even with a daily rotation, is absurd, and both philosophically and theologically false, and at the least an error of faith.”

“The vain presumption of understanding everything can have no other basis than never having understood anything. For anyone who had ever experienced just once the perfect understanding of one single thing, and had truly tasted how knowledge is accomplished, would recognize that of the infinity of other truths he understands nothing.”

“Surely it is a great thing to increase the numerous host of fixed stars previously visible to the unaided vision, adding countless more which have never before been seen, exposing these plainly to the eye in numbers ten times exceeding the old and familiar stars.”

“What has philosophy got to do with measuring anything? It’s the mathematicians you have to trust, and they measure the skies like we measure a field.”

“Well, since paradoxes are at hand, let us see how it might be demonstrated that in a finite continuous extension it is not impossible for infinitely many voids to be found.”

“God is known by nature in his works, and by doctrine in his revealed word.”

“I truly believe the book of philosophy to be that which stands perpetually open before our eyes, though since it is written in characters different from those of our alphabet it cannot be read by everyone.”

“Two truths cannot contradict one another.”

“I therefore concluded, and decided unhesitatingly, that there are three stars in the heavens moving about Jupiter, as Venus and Mercury about the Sun; which at length was established as clear as daylight by numerous other observations. Referring to his pioneering telescope observations.”

“Mathematics is the key and door to the sciences.”

“But, because my private lectures and domestic pupils are a great hinderance and interruption of my studies, I wish to live entirely exempt from the former, and in great measure from the latter. … in short, I should wish to gain my bread from my writings.”

“It reveals to me the causes of many natural phenomena that are entirely incomprehensible in the light of the generally accepted hypotheses. To refute the latter I collected many proofs, but I do not publish them … I would dare to publish my speculations if there were people men like you.”

“Nature is relentless and unchangeable, and it is indifferent as to whether its hidden reasons and actions are understandable to man or not.”

“In time you may discover everything that can be discovered, and still your progress will only be progress away from humanity. The distance between you and them can one day become so great that your joyous cry over some new gain could be answered by an universal shriek of horror.”

“They seemed to forget that the increase of known truths stimulates the investigation, establishment and growth of the arts; not their dimination or destruction.”

“We must say that there are as many squares as there are numbers.”

“I think that in the discussion of natural problems we ought to begin not with the Scriptures, but with experiments, and demonstrations.”

“See now the power of truth; the same experiment which at first glance seemed to show one thing, when more carefully examined, assures us of the contrary.”

“Nature is written in mathematical language.”

“The Universe is a grand book which cannot be read until one first learns to comprehend the language and become familiar with the characters in which it is composed. It is written in the language of mathematics.”

“The difficulties in the study of the infinite arise because we attempt, with our finite minds, to discuss the infinite, assigning to it those properties which we give to the finite and limited; but this… is wrong, for we cannot speak of infinite quantities as being the one greater or less than or equal to another.”

“I would say here something that was heard from an ecclesiastic of the most eminent degree: The intention of the Holy Spirit is to teach us how one goes to heaven, not how the heavens go.”

“Philosophy itself cannot but benefit from our disputes, for if our conceptions prove true, new achievements will be made; if false, their refutation will further confirm the original doctrines.”

“Names and attributes must be accommodated to the essence of things, and not the essence to the names, since things come first and names afterwards.”

“The number of fixed stars which observers have been able to see without artificial powers of sight up to this day can be counted. It is therefore decidedly a great feat to add to their number, and to set distinctly before the eyes other stars in myriads, which have never been seen before, and which surpass the old, previously known stars in number more than ten times.”

“You can’t teach anybody anything, only make them realize the answers are already inside them.”

“Nature . . . is inexorable and immutable; she never transgresses the laws imposed upon her, nor cares a whit whether her abstruse reasons and methods of operations are understandable to men.”