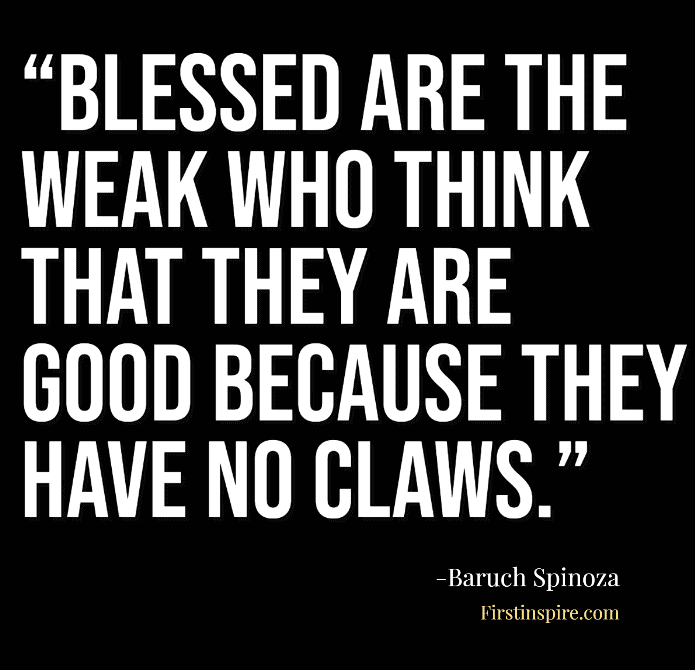 Baruch Spinoza was a Dutch philosopher who is considered to be one of the most influential thinkers in the Western tradition. He was an early proponent of religious toleration and freedom of expression, arguing that democracy should be applied to all aspects of life. He was also important for his contributions to the fields of ethics and metaphysics. Here are some Baruch Spinoza Quotes.

“If you want the present to be different from the past, study the past.”

“I have made a ceaseless effort not to ridicule, not to bewail, not to scorn human actions, but to understand them.”

“The highest activity a human being can attain is learning for understanding, because to understand is to be free.”

“Nothing in nature is by chance… Something appears to be chance only because of our lack of knowledge.”

“The more clearly you understand yourself and your emotions, the more you become a lover of what is.”

“No matter how thin you slice it, there will always be two sides.”

“Be not astonished at new ideas; for it is well known to you that a thing does not therefore cease to be true because it is not accepted by many.”

“Everything in nature is a cause from which there flows some effect.”

“Fear cannot be without hope nor hope without fear.”

“Happiness is not the reward of virtue, but is virtue itself; nor do we delight in happiness because we restrain from our lusts; but on the contrary, because we delight in it, therefore we are able to restrain them.”

“We feel and know that we are eternal.”

“Peace is not an absence of war, it is a virtue, a state of mind, a disposition for benevolence, confidence, justice.”

“The world would be happier if men had the same capacity to be silent that they have to speak.”

“What everyone wants from life is continuous and genuine happiness.”

“It may easily come to pass that a vain man may become proud and imagine himself pleasing to all when he is in reality a universal nuisance.”

“God is the indwelling and not the transient cause of all things.”

“Pride is pleasure arising from a man’s thinking too highly of himself.”

“The more you struggle to live, the less you live. Give up the notion that you must be sure of what you are doing. Instead, surrender to w

“Hatred which is completely vanquished by love passes into love: and love is thereupon greater than if hatred had not preceded it…”

“He alone is free who lives with free consent under the entire guidance of reason.”

“How would it be possible if salvation were ready to our hand, and could without great labor be found, that it should be by almost all men neglected? But all things excellent are as difficult as they are rare.”

“Everything excellent is as difficult as it is rare.”

“So long as a man imagines that he cannot do this or that, so long as he is determined not to do it; and consequently so long as it is impossible to him that he should do it.”

“In so far as the mind sees things in their eternal aspect, it participates in eternity.”

“Happiness is a virtue, not its reward.”

“The most tyrannical of governments are those which make crimes of opinions, for everyone has an inalienable right to his thoughts.”

“Blessedness is not the reward of virtue but virtue itself.”

“All happiness or unhappiness solely depends upon the quality of the object to which we are attached by love.”

“If men were born free, they would, so long as they remained free, form no conception of good and evil.”

“Will and intellect are one and the same thing.”

“All things excellent are as difficult as they are rare.”

“Indulge yourself in pleasures only in so far as they are necessary for the preservation of health.”

“He who seeks equality between unequals seeks an absurdity.”

“No to laugh, not to lament, not to detest, but to understand.”

“Desire nothing for yourself, which you do not desire for others.”

“I do not know how to teach philosophy without becoming a disturber of established religion.”

“I have tried sedulously not to laugh at the acts of man, nor to lament them, nor to detest them, but to understand them.”

“Simply from the fact that we have regarded a thing with the emotion of pleasure or pain, though that thing be not the efficient cause of the emotion, we can either love or hate it.”

“None are more taken in by flattery than the proud, who wish to be the first and are not.”

“To understand something is to be delivered of it.”

“Everything great is just as difficult to realize as it is rare to find.”

“Many errors, of a truth, consist merely in the application of the wrong names of things.”

“Measure, time and number are nothing but modes of thought or rather of imagination.”

“Men govern nothing with more difficulty than their tongues, and can moderate their desires more than their words.”

“A good thing which prevents us from enjoying a greater good is in truth an evil.”

“It is sure that those are most desirous of honour or glory who cry out loudest of its abuse and the vanity of the world.”

“The idea, which constitutes the actual being of the human mind, is not simple, but compounded of a great number of ideas.”

“The greatest good is the knowledge of the union which the mind has with the whole nature.”

“Blessed are the weak who think that they are good because they have no claws.”

“Self-complacency is pleasure accompanied by the idea of oneself as cause.”

“The body is affected by the image of the thing, in the same way as if the thing were actually present.”

“We can always get along better by reason and love of truth than by worry of conscience and remorse…we should strive to keep worry from our life.”

“True virtue is life under the direction of reason.”