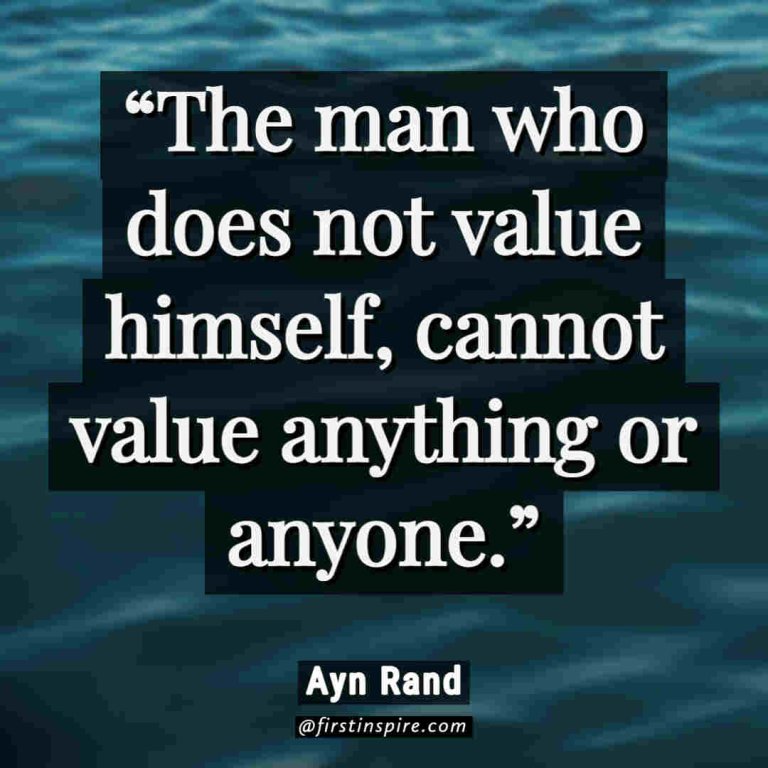 For a period of 30 years, Ayn Rand’s works have given voice to a society too long silent. Her novels, Atlas Shrugged and The Fountainhead represent the epitome of human achievement and free will; her non-fiction work has provided the philosophical foundation for America’s conservative movement. Since first publishing in 1943, she has sold 25 million books in North America alone and her fan base spans generations. Here are some Ayn Rand Quotes.

“The truth is not for all men, but only for those who seek it.”

“Government ‘help’ to business is just as disastrous as government persecution… the only way a government can be of service to national prosperity is by keeping its hands off.”

“Potentially, a government is the most dangerous threat to man’s rights: it holds a legal monopoly on the use of physical force against legally disarmed victims.”

“Individual rights are not subject to a public vote; a majority has no right to vote away the rights of a minority; the political function of rights is precisely to protect minorities from oppression by majorities (and the smallest minority on earth is the individual).”

“Do not let your fire go out, spark by irreplaceable spark in the hopeless swamps of the not-quite, the not-yet, and the not-at-all. Do not let the hero in your soul perish in lonely frustration for the life you deserved and have never been able to reach. The world you desire can be won. It exists.. it is real.. it is possible.. it’s yours.”

“Throughout the centuries there were men who took first steps, down new roads, armed with nothing but their own vision.”

“What is greatness? I will answer: it is the capacity to live by the three fundamental values of John Galt: reason, purpose, self-esteem.”

“Racism is the lowest, most crudely primitive form of collectivism.”

“The man without a purpose is a man who drifts at the mercy of random feelings or unidentified urges and is capable of any evil, because he is totally out of control of his own life. In order to be in control of your life, you have to have a purpose-a productive purpose.”

“Honor is self-esteem made visible in action.”

“Run for your life from any man who tells you that money is evil. That sentence is the leper’s bell of an approaching looter.”

“The uncontested absurdities of today are the accepted slogans of tomorrow.”

“Money is only a tool. It will take you wherever you wish, but it will not replace you as the driver.”

“There are two sides to every issue: one side is right and the other is wrong, but the middle is always evil.”

“The purpose of the law is not to prevent a future offense, but to punish the one actually committed.”

“The purpose of morality is to teach you, not to suffer and die, but to enjoy yourself and live.”

“Men who reject the responsibility of thought and reason can only exist as parasites on the thinking of others.”

“The ladder of success is best climbed by stepping on the rungs of opportunity.”

“The smallest minority on earth is the individual. Those who deny individual rights cannot claim to be defenders of minorities.”

“Man is the only living species that has the power to act as his own destroyer – and that is the way he has acted through most of his history.”

“To achieve, you need thought. You have to know what you are doing and that’s real power.”

“Individualism regards man-every man-as an independent, sovereign entity who possesses an inalienable right to his own life, a right derived from his nature as a rational being.”

“An inventor is a man who asks ‘Why?’ of the universe and lets nothing stand between the answer and his mind.”

“To deal with men by force is as impractical as to deal with nature by persuasion.”

“Thinking men cannot be ruled; ambitious men do not stagnate.”

“Individual rights are not subject to a public vote; a majority has no right to vote away the rights of a minority.”

“The difference between a welfare state and a totalitarian state is a matter of time.”

“Every form of happiness is private. Our greatest moments are personal, self-motivated, not to be touched”.”

“We are born into this world unarmed – our mind is our only weapon.”

“There’s nothing of any importance in life-except how well you do your work.”

“The Argument from Intimidation is a confession of intellectual impotence.”

“One loses everything when one loses one’s sense of humor.”

“Anyone who fights for the future, lives in it today.”

“I can accept anything, except what seems to be the easiest for most people: the half-way, the almost, the just-about, the in-between.”

“The spread of evil is the symptom of a vacuum. Whenever evil wins, it is only by default: by the moral failure of those who evade the fact that there can be no compromise on basic principles.”

“I’ve always thought that a feeling which changes never existed in the first place.”

“A man’s ego is the fountainhead of human progress.”

“There are no evil thoughts except one; the refusal to think.”

“Power-lust is a weed that grows only in the vacant lots of an abandoned mind.”

“The world you desire can be won, it exists, it is real, it is possible, it is yours.”

“Integrity is the ability to stand by an idea.”

“We can evade reality, but we cannot evade the consequences of evading reality”

“Self-sacrifice? But it is precisely the self that cannot and must not be sacrificed.”

“It’s good to suffer. Dont complain. Bear, bow, accept – and be grateful that God has made you suffer. For this makes you better than the people who are laughing and happy.”

“It was the greatest sensation of existence: not to trust but to know.”

“The greatest threat to mankind and civilization is the spread of the totalitarian philosophy. Its best ally is not the devotion of its followers but the confusion of its enemies. To fight it, we must understand it.”

“A house can have integrity, just like a person.”

“The man who speaks to you of sacrifice, speaks of slaves and masters. And intends to be the master.”

“Man’s mind is his basic tool of survival.”

“The great creators-the thinkers, the artists, the scientists, the inventors-stood alone against the men of their time.”

“A mystic is a man who treats his feelings as tools of cognition.”

“All work is an act of philosophy.”

“Show me your achievement, and the knowledge will give me courage for mine.”

“All life is a purposeful struggle, and your only choice is the choice of a goal.”

“Truth is the recognition of reality; reason, man’s only means of knowledge, is his only standard of truth.”

“It is morally obscene to regard wealth as an anonymous, tribal product and to talk about ‘redistributing’ it.”

“But why should you care what people will say? All you have to do is please yourself.”

“The man who does not value himself, cannot value anything or anyone.”

We hope the compilation of these Ayn Rand quotes will give you the motivation you have been looking for.