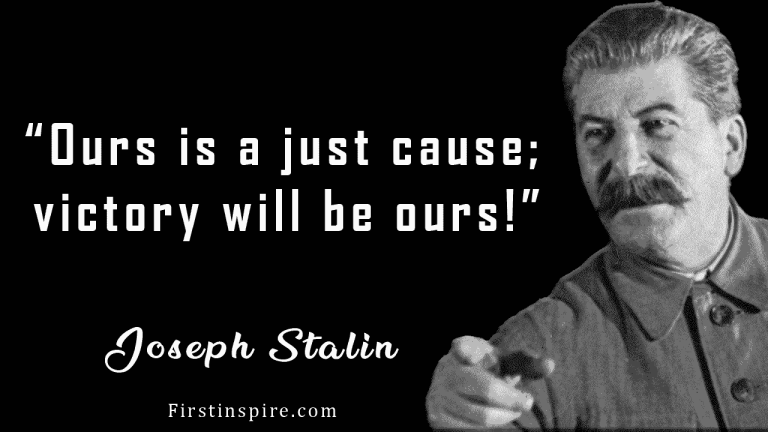 “The Pope? How many divisions has he got?”

“He who votes does not have power. He who counts the votes has power.”

“Education is a weapon whose effects depend on who holds it in his hands and at whom it is aimed.”

“America is like a healthy body and its resistance is threefold: its patriotism, its morality and its spiritual life. If we can undermine these three areas, America will collapse from within.”

“One death is a tragedy; one million is a statistic.”

“The Red Army and Navy and the whole Soviet people must fight for every inch of Soviet soil, fight to the last drop of blood for our towns and villages…onward, to victory!”

“Death solves all problems – no man, no problem.”

“This creature softened my heart of stone. She died and with her died my last warm feelings for humanity.”

“You cannot make a revolution with silk gloves.”

“If the opposition disarms, well and good. If it refuses to disarm, we shall disarm it ourselves.”

“I consider it completely unimportant who in the party will vote, or how; but what is extraordinarily important is this – who will count the votes, and how.”

“[The Albanians] seem to be rather backward and primitive people… they can be as faithful as a dog; that is one of the traits of the primitive. Our Chuvash were the same. The Russian tsars always used them for their bodyguards.”

“The death of one man is tragic, but the death of thousands is statistic”

“The easiest way to gain control of the population is to carry out acts of terror. The public will clamor for such laws if their personal security is threatened.”

“In the Soviet army it takes more courage to retreat than advance.”

“The writer is the engineer of the human soul.”

“I believe in one thing only, the power of human will.”

“If any foreign minister begins to defend to the death a ‘peace conference,’ you can be sure his government has already placed its orders for new battleships and airplanes.”

“Print is the sharpest and the strongest weapon of our party.”

“Everyone imposes his own system as far as his army can reach.”

“How do you expect the Germans to revolt when they don’t even dare walk on the grass?”

“The reason why there is now no communist government in Paris is because in the circumstances of 1945 the Soviet army was not able to reach French soil.”

“There is no doubt that the adsence of a second front in Europe considerably relieves the position of the German army.”

“Each position, each metre of the Soviet territory must be stubbornly defended, to the last drop of blood. We must cling to every inch of Soviet soil and defend it to the end!”

“This war is not as in the past: whoever occupies a territory also imposes his own social system.”

“Marxists have more than once pointed out that the capitalist world economic system contains in itself the seeds of a general crisis and of warlike clashes.”

“This war is not an ordinary war. It is the war of the entire Russian people. Not only to eliminate the danger hanging over our heads, but to aid all people groaning under the yoke of Fascism”

“Do you remember the tsar? Well, Iam like a tsar.”

“Mr. Churchill, Mr. Prime Minister, how many divisions did you say that the pope had?”

“Anti-Semitism, as an extreme form of racial chauvinism, is the most dangerous vestige of cannibalism.”

“Ours is a just cause; victory will be ours!”

“We are fifty or a hundred years behind the advanced countries. We must make good this distance in ten years. Either we do it, or they will crush us.”

“The leaders come and go, but the people remain. Only the people are immortal.”

“There are on occasions, as we know, when resources are abundant, but they are expended so incompetently that the advantage is nullified.”

“You know, they are fooling us, there is no God.”

“We believe that the Anarchists are real enemies of Marxism.”

“You can’t make an omelette without breaking eggs.”

“At this point the question of Ukraine is the most important. The situation in Ukraine is very bad. If we don’t take steps now to improve the situation, we may lose Ukraine. The objective should be to transform Ukraine , in the shortest period of time, into a real fortress of the U.S.S.R.”

“You do not lament the loss of hair of one who has been beheaded.”

“A sincere diplomat is like dry water or wooden iron.”

“Artillery is the god of war.”

“It takes a brave man to be a coward in the Red Army.”

“World dictatorship can be established only when the victory of socialism has been achieved in certain countries or groups of countries … [and] when these federation of republics have finally grown into a world union of Soviet Socialist Republics uniting the whole of mankind under the hegemony of the international proletariat organized as a state.”

“It is not heroes that make history, but history that makes heroes.”

“music’s a good thing, it calm the beast in the man.”

“Quantity has a quality all its own.”

“When one person dies, it’s a tragedy, but when a million people die, it’s a statistic.”

“Ah, these diplomats! What chatterboxes! There’s only one way to shut them up – cut them down with machine guns. Bulganin, go and get me one!”

“Undoubtedly, our path is not of the easiest; but, just as undoubtedly, we are not to be frightened by difficulties. Paraphrasing from the well-known words of Luther, Russia might say ˜Here I stand on the frontier between the old, capitalist world and the new, socialist world. Here on this frontier I unite the efforts of the proletarians of the West and of the peasantry of the East in order to shatter the old world. May the god of history be my aid!”

“When one man dies it is a tragedy, when thousands die it’s statistics.”

“I trust no one, not even myself.”

“I know that after my death a pile of rubbish will be heaped on my grave, but the wind of History will sooner or later sweep it away without mercy.”

“The rich experience of history teaches that up to now not a single class has voluntarily made way for another class.”

“World War II was fought for the abolition of racial exclusiveness, equality of nations and the integrity of their territories, liberation of enslaved nations and restoration of their sovereign rights, the right of every nation to arrange its affairs as it wishes, economic aid to nations that have suffered and assistance to them in attaining their material welfare, restoration of democratic liberties, and destruction of the Hitlerite regime.”

“No revolution can be made with silk gloves.”

“In war I would deal with the Devil and his grandmother”

“The only real power comes out of a long rifle.”

“Gaiety is the most outstanding feature of the Soviet Union.”

“History shows that there are no invincible armies.”

“Mankind is divided into rich and poor, into property owners and exploited; and to abstract oneself from this fundamental division; and from the antagonism between poor and rich means abstracting oneself from fundamental facts.”

“Gratitude is a sickness suffered by dogs.”

“Hitlers come and go, but Germany and the German people remain.”

“Is it possible, then, to doubt that we can and must gain victory over the German invaders? The enemy is not as strong as some terror-stricken pseudo-intellectuals picture him. The devil is not as terrible as he is painted.”

“In the future, there will be fewer but better Russians.”

“To slacken the tempo…would mean falling behind. And those who fall behind get beaten…”

“It doesnt matter how many people vote, only who counts them.”

“Take some exercise, try to recover the look of a human being.”

“Anti-Semitism is dangerous for the toilers, for it is a false track which diverts them from the proper road and leads them into the jungle. Hence, Communists, as consistent internationalists, cannot but be irreconcilable and bitter enemies of anti-Semitism. In the U.S.S.R., anti-Semitism is strictly prosecuted as a phenomenon hostile to the Soviet system. According to the laws of the U.S.S.R. active anti-Semites are punished with death.”

“As we know, the goal of every struggle is victory. But if the proletariat is to achieve victory, all the workers, irrespective of nationality , must be united. Clearly, the demolition of national barriers and close unity between the Russian, Georgian, Armenian, Polish, Jewish and other proletarians is a necessary condition for the victory of the proletariat of all Russia.”