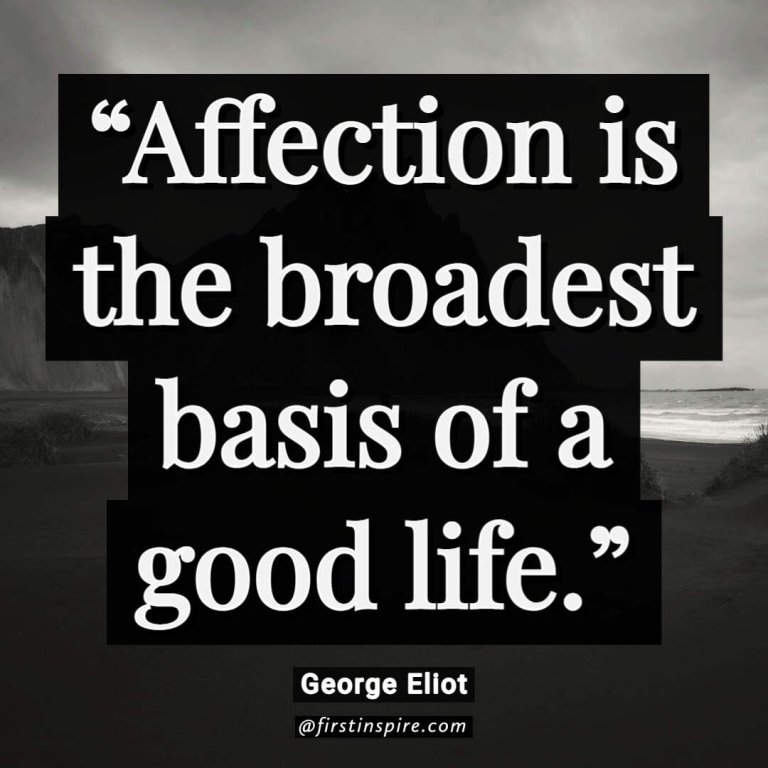 George Eliot was an English novelist best known for her realistic novels of provincial life. Her most famous work is Middlemarch, which some consider to be the greatest novel in the English language. We have compiled some George Eliot Quotes.

Mary Anne Evans was born in 1819 on a farm called Griff House in Nuneaton, Warwickshire, England. Although she was best known for her novels, the author also produced two volumes of poetry. Various film and television adaptations of Eliot’s works have reintroduced him to book lovers, and in 2015 Middlemarch was named by the BBC as the greatest British novel of all time. Although Evans was already a respected writer, she chose to publish the novel under a pseudonym so that her works would be taken seriously in an era when female authors were not heard from or ridiculed. There are not many writers as sincere and good as Eliot.

“It is never too late to be what you might have been.”

“Animals are such agreeable friends – they ask no questions; they pass no criticisms.”

“Adventure is not outside man; it is within.”

“The reward of one duty is the power to fulfill another.”

“Blessed is the influence of one true, loving human soul on another.”

“With memory set smarting like a reopened wound, a man’s past is not simply a dead history, an outworn preparation of the present: it is not a repented error shaken loose from the life: it is a still quivering part of himself, bringing shudders and bitter flavors and the tinglings of a merited shame.”

“It will never rain roses: when we want to have more roses we must plant more trees.”

“The strongest principle of growth lies in the human choice.”

“It seems to me we can never give up longing and wishing while we are thoroughly alive. There are certain things we feel to be beautiful and good, and we must hunger after them.”

“We could never have loved the earth so well if we had had no childhood in it.”

“I like not only to be loved, but also to be told I am loved.”

“What makes life dreary is the want of a motive.”

“Wear a smile and have friends; wear a scowl and have wrinkles.”

“To manage men one ought to have a sharp mind in a velvet sheath.”

“All meanings, we know, depend on the key of interpretation.”

“Perhaps the most delightful friendships are those in which there is much agreement, much disputation, and yet more personal liking.”

“It is always good to know, if only in passing, charming human beings. It refreshes one like flowers and woods and clear brooks.”

“The best travel is that which one can take by one’s own fireside. In memory or imagination.”

“One must be poor to know the luxury of giving!”

“ImaginationÂ is a licensed trespasser: it has no fear of dogs, but may climb over walls and peep in at windows with impunity.”

“Death is the king of this world: ‘Tis his park where he breeds life to feed him. Cries of pain are music for his banquet.”

“Every woman is supposed to have the same set of motives, or else to be a monster.”

“It is a common sentence that knowledge is power; but who hath duly considered or set forth the power of ignorance? Knowledge slowly builds up what ignorance in an hour pulls down.”

“The important work of moving the world forward does not wait to be done by perfect men.”

“We want people to feel with us more than to act for us.”

“Friendship is the inexpressible comfort of feeling safe with a person, having neither to weigh thoughts nor measure words.”

“No soul is desolate as long as there is a human being for whom it can feel trust and reverence.”

“Anger and jealousy can no more bear to lose sight of their objects than love.”

“Failure after long perseverance is much grander than never to have a striving good enough to be called a failure.”

“Any coward can fight a battle when he’s sure of winning.”

“Little children are still the symbol of the eternal marriage between love and duty.”

“Women should be protected from anyone’s exercise of unrighteous power… but then, so should every other living creature.”

“The right to rebellion is the right to seek a higher rule, and not to wander in mere lawlessness.”

“What sunshine is to flowers, smiles are to humanity.”

“What do we live for, if not to make life less difficult for each other?”

“The world is full of hopeful analogies and handsome, dubious eggs, called possibilities.”

“It’s no use filling your pocket with money if you have got a hole in the corner.”

“The responsibility of tolerance lies with those who have the wider vision.”

“These gems have life in them: their colors speak, say what words fail of.”

“If we had a keen vision of all that is ordinary in human life, it would be like hearing the grass grow or the squirrel’s heartbeat, and we should die of that roar which is the other side of silence.”

“One couldn’t carry on life comfortably without a little blindness to the fact that everything has been said better than we can put it ourselves.”

“Jealousy is never satisfied with anything short of an omniscience that would detect the subtlest fold of the heart.”

“Those who trust us educate us.”

“Poetry and art and knowledge are sacred and pure.”

“You have such strong words at command, that they make the smallest argument seem formidable.”

“I am not resigned: I am not sure life is long enough to learn that lesson.”

“What is opportunity to a man who can’t use it.”

“It is always fatal to have music or poetry interrupted.”

“There is only one failure in life possible, and that is not to be true to the best one knows.”

“I’m proof against that word failure. I’ve seen behind it. The only failure a man ought to fear is failure of cleaving to the purpose he sees to be best.”

“A friend is one to whom one may pour out the contents of one’s heart, chaff and grain together, knowing that gentle hands will take and sift it, keep what is worth keeping, and with a breath of kindness, blow the rest away.”

“That by desiring what is perfectly good, even when we don’t quite know what it is and cannot do what we would, we are part of the divine power against evil — widening the skirts of light and making the struggle with darkness narrower.”

“It is very difficult to be learned; it seems as if people were worn out on the way to great thoughts, and can never enjoy them because they are too tired.”

“The darkest night that ever fell upon the earth never hid the light , never put out the stars . It only made the stars more keenly, kindly glancing, as if in protest against the darkness .”

“May every soul that touches mine – be it the slightest contact – get there from some good; some little grace; one kindly thought; one aspiration yet unfelt; one bit of courage for the darkening sky; one gleam of faith to brave the thickening ills of life; one glimpse of brighter skies beyond the gathering mists – to make this life worthwhile.”

“One can say everything best over a meal.”

“We have had an unspeakably delightful journey, one of those journeys which seem to divide one’s life in two, by the new ideas they suggest and the new views of interest they open.”

“Life is measured by the rapidity of change, the succession of influences that modify the being.”

“Every limit is a beginning as well as an ending.”

“Shall we, because we walk on our hind feet, assume to ourselves only the privilege of imperishability?”

“People glorify all sorts of bravery except the bravery they might show on behalf of their nearest neighbors.”

“We learn words by rote, but not their meaning; that must be paid for with our life-blood, and printed in the subtle fibres of our nerves.”

“One can begin so many things with a new person! – even begin to be a better man.”

“Friendships begin with liking or gratitude- roots that can be pulled up.”

“Life is so complicated a game that the devices of skill are liable to be defeated at every turn by air-blown chances, incalculable as the descent of thistle-down.”

“We must find our duties in what comes to us, not in what might have been.”

“There is no despair so absolute as that which comes with the first moments of our first great sorrow, when we have not yet known what it is to have suffered and be healed, to have despaired and have recovered hope.”

“Conscientious people are apt to see their duty in that which is the most painful course.”

“No story is the same to us after a lapse of time; or rather we who read it are no longer the same interpreters.”

“Our deeds still travel with us from afar, and what we have been makes us what we are.”

“Knowledge slowly builds up what Ignorance in an hour pulls down.”

“And, of course men know best about everything, except what women know better.”

“No man can be wise on an empty stomach.”

“Hold up your head! You were not made for failure, you were made for victory. Go forward with a joyful confidence.”

“Life seems to go on without effort when I am filled with music.”

“What greater thing is there for two human souls than to feel that they are joined – to strengthen each other – to be at one with each other in silent unspeakable memories.”

“Only in the agony of parting do we look into the depths of love.”

“Life began with waking up and loving my mother’s face.”

“There are many victories worse than a defeat.”

“We long for an affection altogether ignorant of our faults. Heaven has accorded this to us in the uncritical canine attachment.”

“Appearances have very little to do with happiness.”

“Whether happiness may come or not, one should try and prepare one’s self to do without it.”

“Life’s a vast sea That does its mighty errand without fail, Painting in unchanged strength though waves are changing.”

“Hopes have precarious life. They are oft blighted, withered, snapped sheer off In vigorous growth and turned to rottenness.”

“Affection is the broadest basis of a good life.”

“We have no right to come forward and urge wider changes for good until we have tried to alter the evils which lie under our own hands.”