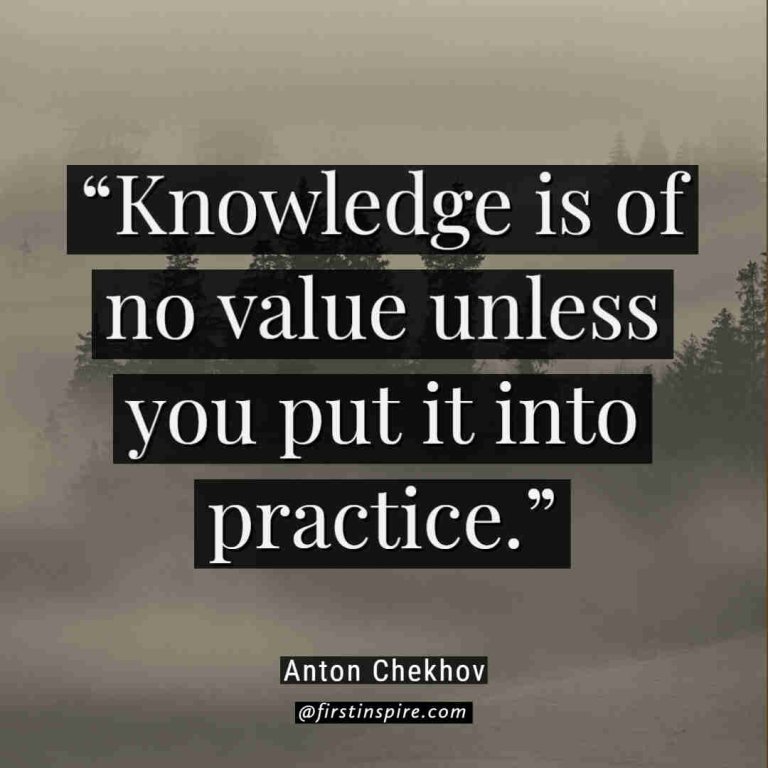 His career as a playwright produced four classics, and his best stories are highly regarded by writers and critics. It can be compared to the works of Shakespeare, who also knew how to clearly describe human nature and consciousness. It gives us a form of escape and at the same time a sense of belonging and understanding – no matter what we are experiencing today, someone, somewhere, at some point also experienced the same thing. Chekhov, April 11, 1889. Usually, he doesn’t like a play when he writes it but then grows attached to it.

Fearing being thrown into prison, he and his family took refuge in Moscow and fled the Russian port city of Taganrog. Chekhov wrote many plays, including the famous Three Sisters and, of course, The Seagull. Chekhov is known as the master of fairy tales, and The Seagull is a collection of short stories in its own right. Chekhov was such an influential figure that many of his interesting words and sayings found their way into modern Russian.

“Knowledge is of no value unless you put it into practice.”

“Love, friendship and respect do not unite people as much as a common hatred for something.”

“Any idiot can face a crisis – it’s day to day living that wears you out.”

“Do silly things. Foolishness is a great deal more vital and healthy than our straining and striving after a meaningful life.”

“Life is given only once, and one wants to live it boldly, with full conscious and beauty.”

“Hypocrisy is a revolting, psychopathic state.”

“Wisdom…. comes not from age, but from education and learning.”

“..when one has no real life, one lives by mirages. It’s still better than nothing.”

“Perhaps the feelings that we experience when we are in love represent a normal state. Being in love shows a person who he should be.”

“Man will become better when you show him what he is like.”

“Let us learn to appreciate there will be times when the trees will be bare, and look forward to the time when we may pick the fruit.”

“If ever my life can be of any use to you, come and claim it.”

“Narrative prose is a legal wife, while drama is a posturing, boisterous, cheeky and wearisome mistress.”

“The illusion which exalts us is dearer to us than ten thousand truths.”

“He who desires nothing, hopes for nothing, and is afraid of nothing, cannot be an artist.”

“A fiance is neither this nor that: he’s left one shore, but not yet reached the other.”

“The more refined one is, the more unhappy.”

“The University brings out all abilities, including incapability.”

“Faith is an aptitude of the spirit. It is, in fact, a talent: you must be born with it.”

“When a lot of remedies are suggested for a disease, that means it can’t be cured.”

“Be sure not to discuss your hero’s state of mind. Make it clear from his actions.”

“People should be beautiful in every way – in their faces, in the way they dress, in their thoughts, and in their innermost selves.”

“They say philosophers and wise men are indifferent. Wrong. Indifference is a paralysis of the soul, a premature death.”

“You must trust and believe in people or life becomes impossible.”

“Despite your best efforts, you could not invent a better police force for literature than criticism and the author’s own conscience.”

“One must not put a loaded rifle on the stage if no one is thinking of firing it.”

“Write only of what is important and eternal.”

“I am now and have always been a stranger to the realm of practical matters.”

“It’s not a matter of old or new forms; a person writes without thinking about any forms, he writes because it flows freely from his soul.”

“An expansive life, one not constrained by four walls, requires as well an expansive pocket.”

“Try to reason about love, and you will lose your reason.”

“Isolation in creative work is an onerous thing. Better to have negative criticism than nothing at all.”

“Probably nature itself gave man the ability to lie so that in difficult and tense moments he could protect his nest, just as do the vixen and wild duck.”

“All great sages are as despotic as generals, and as ungracious and indelicate as generals, because they are confident of their impunity.”

“The more simply we look at ticklish questions, the more placid will be our lives and relationships.”

“Nothing can be accomplished by logic and ethics.”

“Desription should be very brief and have an incidental nature.”

“A sweet lie is more gracious for us than a virulent but real truth.”

“It’s better to live down a scandal than to ruin one’s life.”