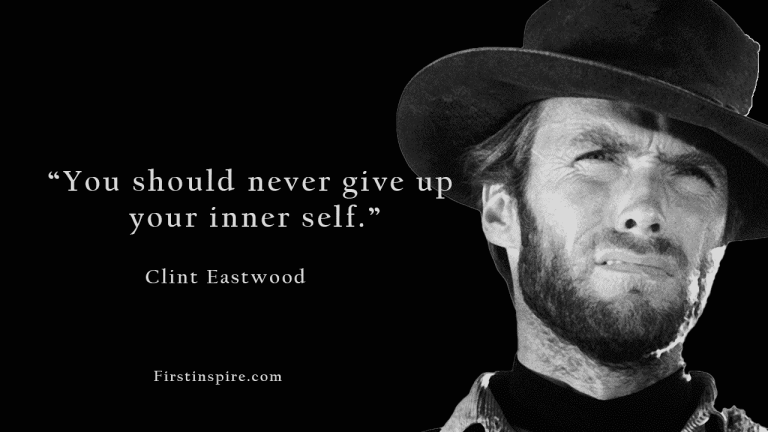 Clinton Eastwood Jr. (born May 31, 1930) is an American actor, film director, producer, and composer. After achieving success in the Western TV series Rawhide, he rose to international fame with his role as the “Man with No Name” in Sergio Leone’s “Dollars Trilogy” of Spaghetti Westerns during the mid-1960s and as antihero cop Harry Callahan in the five Dirty Harry films throughout the 1970s and 1980s. These roles, among others, have made Eastwood an enduring cultural icon of masculinity. Here is some motivation through clint Eastwood quotes.

“There’s a rebel lying deep in my soul. Anytime anybody tells me the trend is such and such, I go the opposite direction. I hate the idea of trends. I hate imitation; I have a reverence for individuality.”

“Tomorrow is promised to no one.”

“They say all marriages are made in heaven, but so are thunder and lightning.”

“I tried being reasonable, but I didn’t like it.”

“I’m interested in the fact that the less secure a man is, the more likely he is to have extreme prejudice.”

“Let’s not go and ruin it by thinking too much.”

“Respect your efforts, respect yourself. Self-respect leads to self-discipline. When you have both firmly under your belt, that’s real power.”

“Extremism is so easy. You’ve got your position, and that’s it. It doesn’t take much thought. And when you go far enough to the right you meet the same idiots coming around from the left.”

“I don’t wanna need you because I can’t have you.”

“I don’t believe in pessimism. If something doesn’t come up the way you want, forge ahead. If you think it’s going to rain, it will.”

“Take your work seriously, but don’t take yourself seriously”

“It’s a hell of a thing; killin’ a man. You take away everything he ever had and ever would have.”

“If a person is confident enough in the way they feel, whether it’s an art form or whether it’s just in life, it comes off—you don’t have anything to prove; you can just be who you are.”

“Deserve’s got nothin’ to do with it.”

“Work hard, keep your nose clean, and just stick around.”

“Overnight stardom can be harmful to your mental health. Yeah. It has ruined a lot of people.”

“Fate pulls you in different directions.”

“I guess maybe when you get past 70, other people start asking you how you feel.”

“I keep working because I learn something new all the time.”

“I’m not afraid to look bad on the screen.”

“If a person doesn’t change, there’s something really wrong with him.”

“It takes tremendous discipline to control the influence, the power you have over other people’s lives.”

“We boil at different degrees.”

“I think there is a lot made out of age, and what age you feel.”

“My whole life has been one big improvisation.”

“Some people feel that the world owes them a living.”

“What you put into life is what you get out of it.”

“You can’t stop everything from happening. But we’ve gotten to a point where we’re certainly trying. If a car doesn’t have four hundred air bags in it, then it’s no good.”

“I always liked characters that were more grounded in reality.”

“Sometimes if you want to see a change for the better, you have to take things into your own hands.”

“You have to feel confident. If you don’t, then you’re going to be hesitant and defensive, and there’ll be a lot of things working against you.”

“You have to steal a lot. You have to have a criminal mentality to be a film director.”

“I’ve taken advantage of a few breaks that came along and moved along with them.”

“Men must know their limitations.”

“Self-respect leads to self-discipline. When you have both firmly under your belt, that’s real power.”

“You should never give up your inner self.”

“Man becomes his most creative during war.”