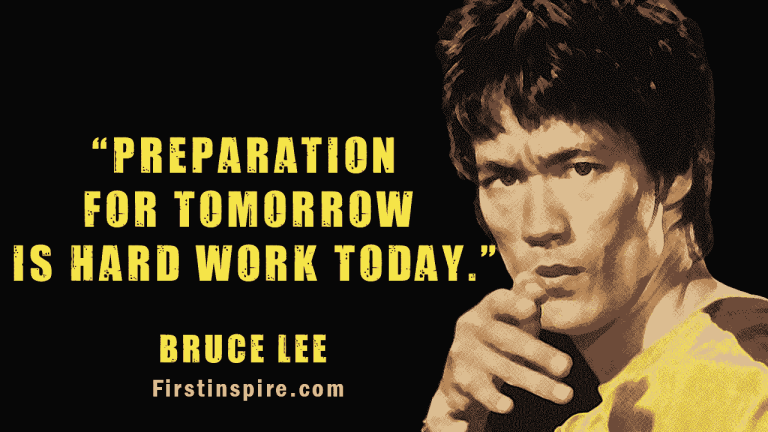 Lee Jun-fan commonly known as Bruce Lee was a Chinese American martial artist, actor, director, martial arts instructor, and philosopher. He was the founder of Jeet Kune Do, a hybrid martial arts philosophy drawing from different combat disciplines that are often credited with paving the way for modern mixed martial arts (MMA). we hope Bruce Lee quotes will motivate and inspire you. He is known for his films like Enter the Dragon, Fist of Fury, etc. He has been an Influential figure for other martial art artists including Jackie chan. Here are some of the Bruce Lee quotes for strength and self-confidence that will help you. He was always known for beating the odds and some of his motivational quotes are still an inspiration to many today.

Lee’s attempt to develop a unified theory of self-expression was also quickly dubbed a style, becoming a model for learning to fight “like Bruce Lee,” using the momentum Lee created through his Hong Kong films. Lee felt that even the system he now called Jun Fang Gung Fu was too restrictive and eventually morphed into a philosophy and martial art that he would call Jeet Kune Do or the Intercept Fist Path. However, Bruce Lee did some research and realized he could use martial arts in conjunction with bodybuilding and powerlifting techniques to develop more explosive strength from this fast-twitch muscle fiber and brain-muscle connection and that was it all. workout.

“If you spend too much time thinking about a thing, you’ll never get it done.”

“Do not pray for an easy life, pray for the strength to endure a difficult one.”

“Mistakes are always forgivable if one has the courage to admit them.”

“A wise man can learn more from a foolish question than a fool can learn from a wise answer.”

“To hell with circumstances; I create opportunities.”

“Obey the principles without being bound by them.”

“The moment is freedom. I couldn’t live by a rigid schedule. I try to live freely from moment to moment, letting things happen and adjusting to them.”

“Take no thought of who is right or wrong, or who is better than. Be not for or against.”

“The less effort, the faster and more powerful you will be.”

“Life is never stagnation. It is constant movement, un-rhythmic movement, as we as constant change. Things live by moving and gain strength as they go.”

“Art calls for complete mastery of techniques, developed by reflection within the soul.”

“The key to immortality is first living a life worth remembering.”

“Notice that the stiffest tree is most easily cracked, while the bamboo or willow survives by bending with the wind.”

“If you love life, don’t waste time, for time is what life is made up of.”

“Life’s battles don’t always go to the stronger or faster man. But sooner or later the man who wins is the man who thinks he can.”

“For it is easy to criticize and break down the spirit of others, but to know yourself takes a lifetime.”

“The spirit of the individual is determined by his dominating thought habits.”

“Don’t fear failure. Not failure, but low aim, is the crime. In great attempts, it is glorious even to fail.”

“The world is full of people who are determined to be somebody or to give trouble. They want to get ahead, to stand out. Such ambition has no use for a gung fu man, who rejects all forms of self-assertiveness and competition”

“Belts are only good for holding up your pants”

“Dedication, absolute dedication, is what keeps one ahead. A sort of indomitable obsessive dedication and the realization that there is no end or limit to this because life is simply an ever-growing process, an ever-renewing process.”

“Since life is an ever evolving process, one should flow in this process and discover how to actualize and expand oneself.”

“Either you understand or you don’t, and that is that.”

“Everything you do, if not in a relaxed state will be done at a lesser level than you are proficient. Thus the tensed expert marksman will aim at a level less than his/her student.”

“The meaning of life is that it is to be lived, and it is not to be traded and conceptualized and squeezed into a patter of systems.”

“Fluidity is the way to an empty mind. You must free your ambitious mind and learn the art of dying.”

“Be Water, My Friend.

You put water into a cup, it becomes the cup.

You put water into a bottle, it becomes the bottle.

You put it into a teapot, it becomes the teapot.

Now water can flow or it can crash.

Be water, my friend.”

“A man must constantly exceed his level”

“In order to control myself I must first accept myself by going with and not against my nature.”

“To understand your fear is the beginning of really seeing.”

“Don’t fear failure Not failure, but low aim, is the crime. In great attempts it is glorious even to fail.”

“To me defeat in anything is merely temporary. Defeat simply tells me that something is wrong in my doing; it is a path leading to success and truth.”

“He who wants to succeed should learn how to fight, to strive and to suffer. You can acquire a lot in life, if you are prepared to give up a lot to get it.”

“You have to create your own luck. You have to be aware of the opportunities around you and take advantage of them.”

“Loneliness is only an opportunity to cut adrift and find yourself. In solitude you are least alone.”

“Maturation is the development from environmental support to self-support.”

“Give recognition where it is due. Compliments stimulate more effort and desire to improve. Be generous with honest praising.”

“To me, ultimately, martial arts means honestly expressing yourself.”

“The usefulness of the cup is its emptiness.”

“To reach me, you must move to me. Your attack offers me an opportunity to intercept you.”

“If you want to learn to swim you have to throw yourself in the water.”

“Simplicity of expression rather than complexity of form.”

“A good martial artist does not become tense, but ready.”

“Nothingness cannot be defined; the softest thing cannot be snapped.”

“When you feel pain, you know that you are still alive.”

“Truth has no path. Truth is living and, therefore, changing. Awareness is without choice, without demand, without anxiety; in that state of mind, there is perception. To know oneself is to study oneself in action with another person. Awareness has no frontier; it is giving of your whole being, without exclusion.”

“Ideas are the beginning of all achievement.”

“Low aim, not failure, is the crime.”

“Understanding requires not just a moment of perception, but a continuous awareness, a continuous state of inquiry without conclusion”

“The reward is found in the work.”

“Any technique, however worthy and desirable, becomes a disease when the mind is obsessed with it.”

“Learning is a constant process of discovery – a process without end.”

“The change is from inner to outer. We start by dissolving our attitude not by altering outer conditions.”

“I’ve come to understand that life is best lived, not conceptualized.”

“All goals apart from the means are illusions; becoming is a denial of being.”

“In life, what more can you ask for than to be real?”

“Seek freedom from the conformity of styles”

“Optimism is a faith that leads to success.”

“To be what I term a ‘quality’ human being one has to be transparently real and have the courage to be what he is.”

“If I should die tomorrow, I will have no regrets. I did what I wanted to do. You can’t expect more from life.”

“If you think a thing is impossible,you’ll only make it impossible.”

“Be self aware, rather than a repetitious robot”

“Absorb what is useful, Discard what is not, Add what is uniquely your own.”

“One great cause of failure is lack of concentration.”

“Make at least one definite move daily toward your goal.”

“Man, the living creature, the creating individual, is always more important than any established style or system.”

“Simplicity is the key to brilliance.”

“Use only that which works, and take it from any place you can find it.”

“Do not run away; let go. Do not seek; for it will come when least expected.”

“A good teacher protects his pupils from his own influence.”

we hope some these quotes for motivational approach to life is more fulfilling.