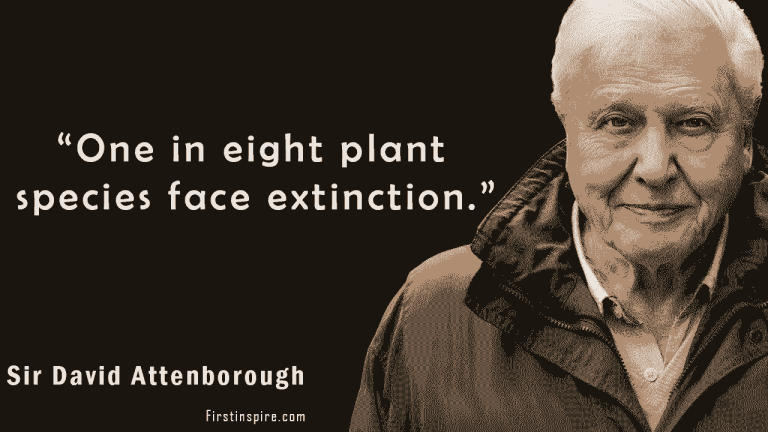 Sir David Frederick Attenborough is an English broadcaster, natural historian, and author. He is best known for writing and presenting, in conjunction with the BBC Natural History Unit, the nine natural history documentary series forming the Life collection, a comprehensive survey of animal and plant life on Earth. His filmography as writer, presenter and narrator spans eight decades; it includes Zoo Quest, Natural World, Wildlife on One, the Planet Earth franchise, The Blue Planet, and its sequel. He is the only person to have won BAFTAs in all of the categories black and white, color, high-definition, 3D, and 4K resolutions. Here are some David Attenborough Quotes.

“The truth is: the natural world is changing. And we are totally dependent on that world. It provides our food, water and air. It is the most precious thing we have and we need to defend it.”

“The correct scientific response to something that is not understood must always be to look harder for the explanation, not give up and assume a supernatural cause.”

“I just wish the world was twice as big and half of it was still unexplored.”

“The question is, are we happy to suppose that our grandchildren may never be able to see an elephant except in a picture book?”

“People are not going to care about animal conservation unless they think that animals are worthwhile.”

“Many individuals are doing what they can. But real success can only come if there is a change in our societies and in our economics and in our politics.”

“An understanding of the natural world and what’s in it is a source of not only a great curiosity but great fulfillment.”

“The future of life on earth depends on our ability to take action. Many individuals are doing what they can, but real success can only come if there’s a change in our societies and our economics and in our politics. I’ve been lucky in my lifetime to see some of the greatest spectacles that the natural world has to offer. Surely we have a responsibility to leave for future generations a planet that is healthy, inhabitable by all species”

“I’m not an animal lover if that means you think things are nice if you can pat them, but I am intoxicated by animals.”

“I suffer much less than many of my colleagues. I am perfectly able to go to Australia and film within three hours of arrival.”

“I’m absolutely strict about it. When I land, I put my watch right, and I don’t care what I feel like, I will go to bed at half past eleven. If that means going to bed early or late, that’s what I live by. As soon as you get there, live by that time.”

“I would be absolutely astounded if population growth and industrialisation and all the stuff we are pumping into the atmosphere hadn’t changed the climatic balance. Of course it has. There is no valid argument for denial.”

“I mean, it is an extraordinary thing that a large proportion of your country and my country, of the citizens, never see a wild creature from dawn ’til dusk, unless it’s a pigeon, which isn’t really wild, which might come and settle near them.”

“The only way to save a rhinoceros is to save the environment in which it lives, because there’s a mutual dependency between it and millions of other species of both animals and plants.”

“I don’t run a car, have never run a car. I could say that this is because I have this extremely tender environmentalist conscience, but the fact is I hate driving.”

“I can mention many moments that were unforgettable and revelatory. But the most single revelatory three minutes was the first time I put on scuba gear and dived on a coral reef. It’s just the unbelievable fact that you can move in three dimensions.”

“I think a major element of jet lag is psychological. Nobody ever tells me what time it is at home.”

“People must feel that the natural world is important and valuable and beautiful and wonderful and an amazement and a pleasure.”

“It is that range of biodiversity that we must care for – the whole thing – rather than just one or two stars.”

“Cameramen are among the most extraordinarily able and competent people I know. They have to have an insight into natural history that gives them a sixth sense of what the creature is going to do, so they can be ready to follow.”

“They always mean beautiful things like hummingbirds. I always reply by saying that I think of a little child in east Africa with a worm burrowing through his eyeball. The worm cannot live in any other way, except by burrowing through eyeballs. I find that hard to reconcile with the notion of a divine and benevolent creator.”

“Television of course actually started in Britain in 1936, and it was a monopoly, and there was only one broadcaster and it operated on a license which is not the same as a government grant.”

“I’m no longer skeptical. I no longer have any doubt at all. I think climate change is the major challenge facing the world.”

“Life is not all high emotion. Some of the most interesting things are when its not highly emotional: little details of relationships and body language.”

“I’m not over-fond of animals. I am merely astounded by them.”

“What humans do over the next 50 years will determine the fate of all life on the planet.”

“Children start off reading in books about lions and giraffes and so on, but they also-if they’re lucky enough and have reasonable privileges of any human being-are able to go into a garden and turn over stone and see a worm and see a slug and see an ant.”

“Since when has Finland been a rotten place to live in?”

“The reverse side of the coin in having this extraordinary ability to go anywhere, is that no one anywhere is remote any more.”

“It never really occurred to me to believe in God.”

“Bringing nature into the classroom can kindle a fascination and passion for the diversity of life on earth and can motivate a sense of responsibility to safeguard it.”

“Now, I find that very difficult to reconcile with notions about a merciful God.”

“Its about cherishing the woodland at the bottom of your garden or the stream that runs through it. It affects every aspect of life.”

“Birds were flying from continent to continent long before we were. They reached the coldest place on Earth, Antarctica, long before we did. They can survive in the hottest of deserts. Some can remain on the wing for years at a time. They can girdle the globe. Now, we have taken over the earth and the sea and the sky, but with skill and care and knowledge, we can ensure that there is still a place on Earth for birds in all their beauty and variety – if we want to… And surely, we should.”

“People talk about doom-laden scenarios happening in the future: they are happening in Africa now. You can see it perfectly clearly. Periodic famines are due to too many people living on land that can’t sustain them.”

“I don’t like rats, but there’s not much else I don’t like. The problem with rats is they have no fear of human beings, they’re loaded with foul diseases, they would run the place given half the chance, and I’ve had them leap out of a lavatory while I’ve been sitting on it.”

“The more you go on, the less you need people standing between you and the animal and the camera waving their arms about.”

“I don’t approve of sunbathing, and it’s bad for you.”

“I’m luckier than my grandfather, who didn’t move more than five miles from the village in which he was born.”

“I’m swanning round the world looking at the most fabulously interesting things. Such good fortune.”

“I’m not a propagandist, I’m not a polemicist; my primary interest is just looking at and trying to understand how animals work.”

“All our environmental problems become easier to solve with fewer people and harder – and ultimately impossible to solve – with ever more people.”