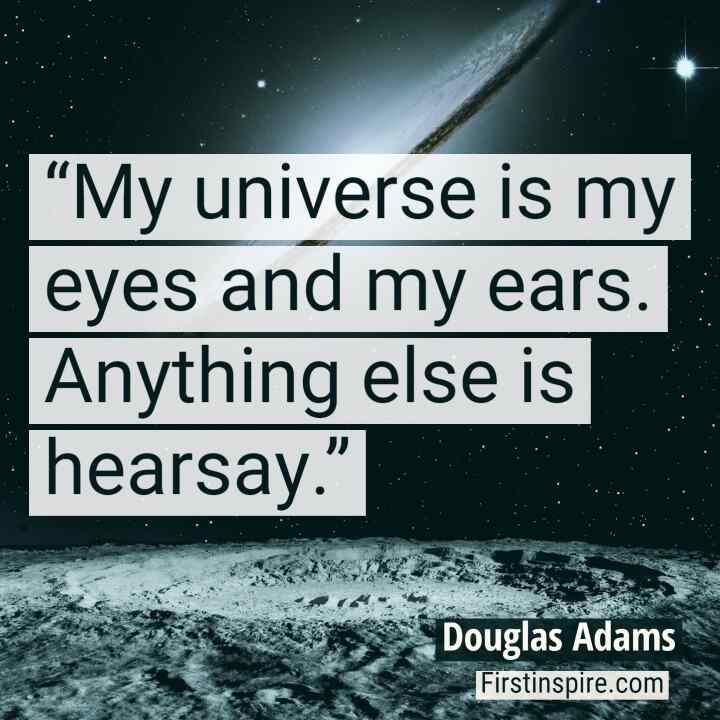 Douglas Noel Adams (11 March 1952 – 11 May 2001) was an English author, scriptwriter, essayist, humorist, satirist, and dramatist. Hitchhiker’s Guide to the Galaxy is a series of five books written by Douglas Adams that has become a cult classic since its first radio broadcast in 1978. The books are about Arthur Dent, who finds himself saving the galaxy from destruction. Here are some Douglas Adams Quotes.

“A common mistake that people make when trying to design something completely foolproof is to underestimate the ingenuity of complete fools.”

“The story so far:In the beginning the Universe was created.This has made a lot of people very angry and been widely regarded as a bad move.”

“I may not have gone where I intended to go, but I think I have ended up where I needed to be.”

“I love deadlines. I love the whooshing noise they make as they go by.”

“We are stuck with technology when what we really want is just stuff that works.”

“There is no point in using the word ‘impossible’ to describe something that has clearly happened.”

“He felt that his whole life was some kind of dream and he sometimes wondered whose it was and whether they were enjoying it.”

“Nothing travels faster than the speed of light, with the possible exception of bad news, which obeys its own special laws.”

“If there’s anything more important than my ego around, I want it caught and shot now.”

“There are some people you like immediately, some whom you think you might learn to like in the fullness of time, and some that you simply want to push away from you with a sharp stick.”

“A learning experience is one of those things that says, ‘You know that thing you just did? Don’t do that.”

“Space is big. You just won’t believe how vastly, hugely, mind-bogglingly big it is. I mean, you may think it’s a long way down the road to the chemist’s, but that’s just peanuts to space.”

“Let’s think the unthinkable, let’s do the undoable. Let us prepare to grapple with the ineffable itself, and see if we may not eff it after all.”

“All opinions are not equal. Some are a very great deal more robust, sophisticated and well supported in logic and argument than others.”

“My universe is my eyes and my ears. Anything else is hearsay.”

“Anyone who is capable of getting themselves made President should on no account be allowed to do the job.”

“The world is a thing of utter inordinate complexity and richness and strangeness that is absolutely awesome.”

“Don’t believe anything you read on the net. Except this. Well, including this, I suppose.”

“A cup of tea would restore my normality.”

“We can’t win against obsession. They care, we don’t. They win.”

“The quality of any advice anybody has to offer has to be judged against the quality of life they actually lead.”

“It can be very dangerous to see things from somebody else’s point of view without the proper training.”

“Even a manically depressed robot is better to talk to than nobody.”

“A life that is burdened with expectations is a heavy life. Its fruit is sorrow and disappointment.”

“The Guide is definitive. Reality is frequently inaccurate.”

“He attacked everything in life with a mix of extraordinary genius and naive incompetence, and it was often difficult to tell which was which.”