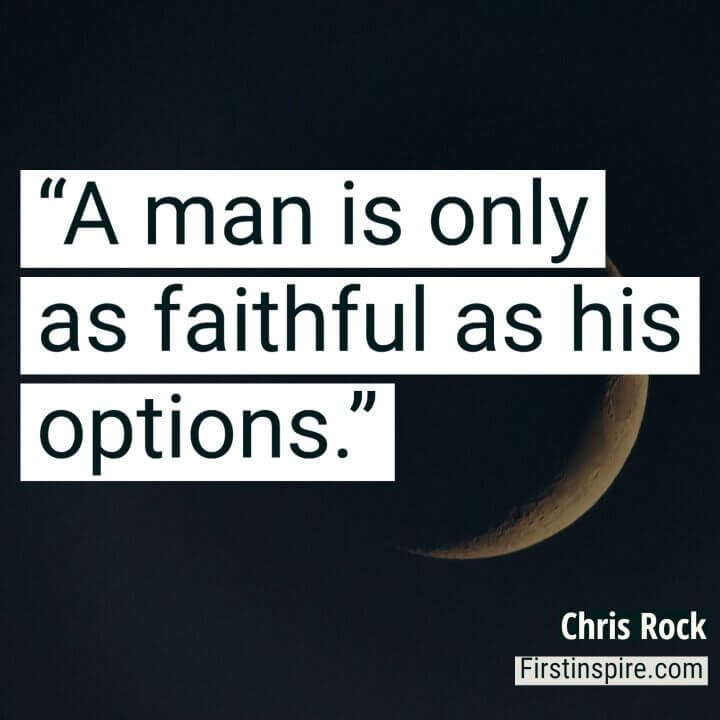 Chris Rock then wrote, directed, and starred in The Top Five (2014), about a comedian struggling to move on to more serious fare. The film was praised for its successful placement of the Rocks, turning the humor into a touching and believable narrative. In a poll conducted by Comedy Central, he was voted the fifth-greatest stand-up comedian. Watch the recording, The Rock tops the list of all-time great comedians. Here are some Chris Rock Quotes.

“There are people who would like to get rid of minimum wage. But we have to have it, because if we didn’t some people would not get paid money. They would work all week for two loaves of bread and some Spam.”

“It’s easier to get on show business, the hard part is to maintain. Nobody stays famous forever.”

“So, to say Barack Obama is progress is saying that he’s the first black person that is qualified to be president. That’s not black progress. That’s white progress.”

“One of my daughters told me the other day, “Kevin Hart is funnier than you, Daddy.” I told her, “Does Kevin Hart make you pancakes?”

“If you told me two years I would miss the greatest basketball game ever to hang out with Nathan Lane, I’d say, ‘You’re crazy!’”

“If poor people knew how rich rich people are, there would be riots in the streets,”

“Unlike flying or astral projection, walking through walls is an earthbound pursuit…”

“There are only three things women need in life: food, water, and compliments.”

“People want what they want. And I guess that is a reason we have this big credit card problem and a lot of these foreclosures.”

“If you want to prevent abortions, you make sure everyone has health care, a high school education and birth control. Not the exact opposite.”

“We treat racism in this country like it’s a style that America went through. Like flared legs and lava lamps. Oh, that crazy thing we did. We were hanging black people. We treat it like a fad instead of a disease that eradicates millions of people. You’ve got to get it at a lab, and study it, and see its origins, and see what it’s immune to and what breaks it down.”

“When you’re doing a big-budget movie and you’re four on the call sheet, you’ve got a lot of free time.”

“I literally don’t know what I’m going to do next. That’s successful.”

“You don’t need a critic to tell you people aren’t laughing.”

“People are always going to, you know, find something wrong with people who are not the exact same as them. That’s just what it is. Black, white, short, tall, religions, whatever. People are bad.”

“People are the same wherever you go. And if they weren’t, they wouldn’t laugh at the same s*t.”

“The thing about having an audience right there laughing is that critics can write what they want, but the proof is right there in front of you.”

“Success is just hanging out with my kids. I mean, I always say if you have options, you’re rich. To me, success is the fact that hey, I just did a movie and maybe I’ll do some stand up, maybe I’ll will write a book or maybe I will do a play.”

“I try to stay with it and I try to stay in contact with comedians and just keep comedians in my life ’cause comedians are their own species. If you get away from them, especially as a comedian, I think it’s dangerous.”

“Comedians are the one who have to tell the emperor he has no clothes on.”

“You can only offend me if you mean something to me.”

“Everything’s funny – in the right context and done by the right person.”

“Everyone has favorite criminals. Mine are pimps. We can all rob a bank; we can all sell drugs. Being a pimp is a whole other thing.”

“My dad worked every day. I didn’t get into show business to work every day. So the fact that most days I get to like, spend really good time with my kids – that’s what success is to me.”

“I never really write the jokes. I just sit down over a week or two and try to figure out what I want to talk about. Once I narrow that down, then I start working on the material, like “How do I make this stuff funny?””

“Men lie the most, women tell the biggest lies.”

“I live in a neighborhood so bad that you can get shot while getting shot.”

“Only dumb people try to impress smart people. Smart people just do what they do.”

“If you can keep your son off the pipe and your daughter off the pole, you’re ahead of the game.”

“You’re not famous unless people’s mothers know who you are. Everybody else, you think you’re famous, but you’re just hot, and heat cools off.”

“You cannot win in a fight against women, cause men have a need to make sense”

“If you’re the president you only have two jobs: peace and money.”

“When people try to read between the lines – critics, they have a job. Their job is to make something bigger than it is.”

“When I do something good, the audience lets me know immediately. They laugh. That’s it.”

“Most people don’t realize this, but you can eat organic, all natural, gluten-free food without telling everyone around you.”

“I got love from my family. I don’t really need love from a paper, you know what I mean? I can’t get too happy because somebody said something nice about me. I appreciate it, but let’s not get it twisted – this is not changing my life.”

“Artistically I’m curious. But in life? No. I can go to a restaurant and order the same thing for 10 years.”

“You can’t be happy that fire cooks your food and be mad it burns your fingertips.”

“Comedy is the blues for people who can’t sing.”

“There’s a difference between racism and “I don’t know any better. I’m clueless.” Racism is like, “I’m trying to make you feel bad.” That’s racism.”

“If your work is so smart that only smart people get it, it’s not that smart.”

“A sense of humor is great – it goes a long, long way in a marriage.”

“Stand-up comedy is like the lowest medium in all of show business in levels of respect.”

“A man is only as faithful as his options.”

“I don’t get high, but sometimes I wish I did. That way, when I messed up in life I would have an excuse. But right now there’s no rehab for stupidity.”

“I had always been – everybody kind of likes comedy. I was very interested in comedy, beyond just liking it. I had friends that took apart radios; I wanted to take apart jokes.”

“When a musical act performs, the black audience goes crazy for all the stuff, the album cuts, everything. White audiences, they’re nice and all, but they’re not going to lose it until they get the hits. Comedy is the same thing.”

“I think anybody in front of a crowd is a comedian.”

“Yeah, I love being famous. It’s almost like being white, y’know?”

“Smart is knowing if you’re dumb. Knowing when to shut up and to listen to people that are smarter than you.”

“A comedy club is a place where you work out material, you’re trying material.”

“You can’t think the thoughts you want to think if you think you’re being watched.”

“If you properly clean a room, it gets dirtier before it gets cleaner.”

“Don’t argue! You cannot win, you cannot beat a woman in a arguement. It’s impossble you will not win. Cause men, we are handicapped when it comes to arguing cause we have a need to make sense”