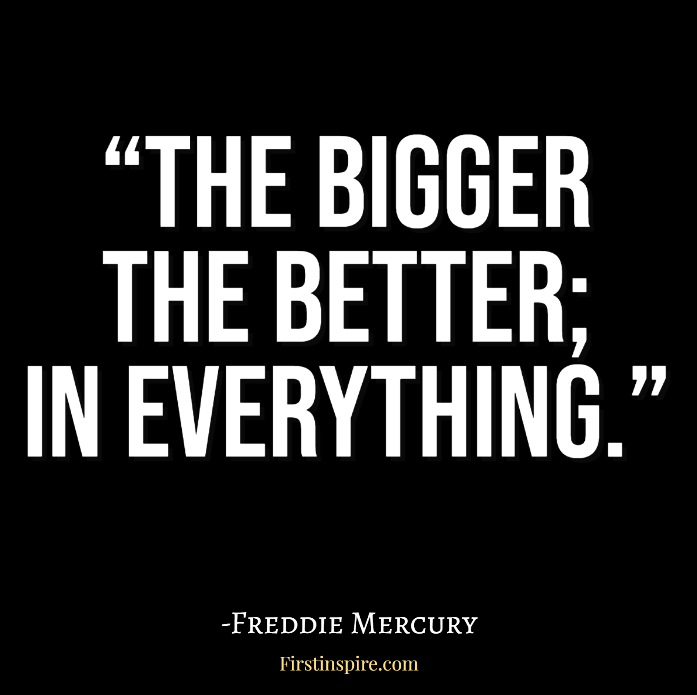 Freddie Mercury was a British singer, songwriter, record producer, and lead vocalist of the rock band Queen. Regarded as one of the greatest singers in the history of rock music, he was known for his flamboyant stage persona and four-octave vocal range. Here are some Freddie mercury quotes.

“I dress to kill, but tastefully.”

“Modern paintings are like women, you’ll never enjoy them if you try to understand them.”

“I think my melodies are superior to my lyrics.”

“I always knew I was a star And now, the rest of the world seems to agree with me.”

“Excess is part of my nature. Dullness is a disease. I really need danger and excitement. I’m never scared of putting myself out on a limb.”

“I love the fact that I can make people happy, in any form. Even if itâ€™s just an hour of their lives, if I can make them feel lucky or make them feel good, or bring a smile to a sour face, that to me is worthwhile.”

“If I had to do it all over again? Why not, I would do it a little bit differently.”

“Money may not buy happiness, but it can damn well give it!”

“Oh, I was not made for heaven. No, I don’t want to go to heaven. Hell is much better. Think of all the interesting people you’re going to meet down there!”

“You can have everything in the world and still be the loneliest man. And that is the most bitter type of loneliness, success has brought me world idolization and millions of pounds. But it’s prevented me from having the one thing we all need: A loving, ongoing relationship.”

“The reason we’re successful, darling? My overall charisma, of course.”

“In the early days, we just wore black onstage. Very bold, my dear. Then we introduced white, for variety, and it simply grew and grew.”

“I’m very emotional; I think I may go mad in several years’ time.”

“I am a romantic, but I do put up a barrier around myself, so it is hard for people to get in and to know the real me”

“What you must understand is that my voice comes from the energy of the audience. The better they are, the better I get.”

“It’s a beautiful day, the sun is shining, I feel good, and no one’s gonna stop me now.”

“I guess I’ve always lived the glamorous life of a star. It ‘s nothing new – I used to spend down to the last dime.”

“We’re a bit flashy, but the music’s not one big noise.”

“I’m hopeless with money; I simply spend what I’ve got.”

“Who wants to live forever?”

“And, we have no such thing as a budget anymore. Our manager freaks when we show him the bill. We’re lavish to the bone, but all our money goes back into the product.”

“The bigger the better; in everything.”

“My soul has painted like the wings of butterflies, Fairy tales of yesterday will grow but never die, I can fly, my friends…”

“Get on your bikes and ride!”

“The most important thing is to live a fabulous life. As long as it’s fabulous I don’t care how long it is.”

“The others don’t like my interviews. And frankly, I don’t care much for theirs.”

“It destroys the soul to hear that you’re all hype, that you have no talent, and that your whole career has been contrived.”

“In terms of love, you’re not in control and I hate that feeling. I seem to write a lot of sad songs because I’m a very tragic person. But there’s always an element of humor at the end.”

“We were disliked by the press in the early days because they couldn’t put their finger on us, and that was the case with Zeppelin as well.”

“It’s not a question of money anymore. I spend money like it’s nothing. You know, I could be penniless tomorrow, but I’d get back, somehow.”

“I’m so powerful in stage that I seem to have created a monster. When I’m performing I’m an extrovert, yet inside I’m a completely different man.”

“The lavish presentation appeals to me, and I’ve got to convince the others.”

“I don’t like the way my teeth protrude. I’m going to have them done, but I just haven’t had the time. Apart from that… I’m perfect.”