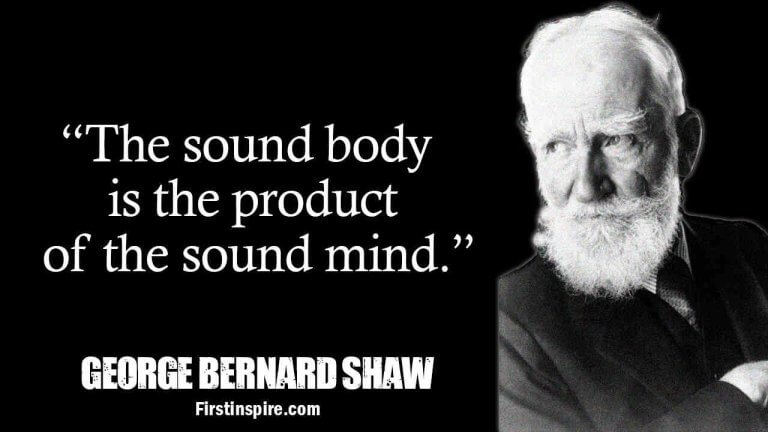 Bernard Shaw declared himself a socialist in 1882 and joined the Fabian Society in 1884; He soon established himself as a fluent and effective speaker, as well as a shrewd and irreverent critic of music, art, and theater. He developed an extensive knowledge of music, art, and literature from the influence of his mother, a singer, and teacher of vocal music, and from visiting the National Gallery of Ireland. Here are some George Bernard Shaw Quotes.

After working for some time in a real estate agent’s office, he moved as a young man to London (1876), where he established himself as a leading music and theater critic in the 1980s and 1990s and became a prominent member of the Fabian Society. compiled many pamphlets. He began his literary career as a writer; as an ardent supporter of Ibsen’s new theater (The Quintessence of Ibsenism, 1891), he decided to write plays to illustrate his critique of the English stage.

Shaw admired other figures of the Irish literary revival, including George Russell and James Joyce, and was a close friend of Sean O. Casey, who was inspired to become a playwright after reading John Bull’s The Other Island. George Bernard Shaw lectured on socialism in the streets and helped distribute political literature.

“If you want to tell people the truth, make them laugh, otherwise they’ll kill you.”

“One man that has a mind and knows it can always beat ten men who haven’t and don’t.”

“If you can’t appreciate what you’ve got, you’d better get what you can appreciate.”

“You have learnt something. That always feels at first as if you have lost something.”

“Human beings are the only animals of which I am thoroughly and cravenly afraid.”

“A life spent making mistakes is not only more honorable, but more useful than a life spent doing nothing.”

“A life spent making mistakes is not only more honorable, but more useful than a life spent doing nothing.”

“Just do what must be done. This may not be happiness, but it is greatness.”

“Never wrestle with pigs. You both get dirty and the pig likes it.”

“Choose silence of all virtues, for by it you hear other men’s imperfections, and conceal your own.”

“Life does not cease to be funny when people die any more than it ceases to be serious when people laugh.”

“Power does not corrupt men; fools, however, if they get into a position of power, corrupt power.”

“All progress depends on the unreasonable man.”

“My way of joking is to tell the truth. It’s the funniest joke in the world.”

“The play was a great success, but audience was a dismal failure.”

“Both optimists and pessimists contribute to society. The optimist invents the aeroplane, the pessimist the parachute.”

“Better keep yourself clean and bright; you are the window through which you must see the world.”

“The power of accurate observation is commonly called cynicism by those who have not got it.”

“Imagination is the beginning of creation. You imagine what you desire, you will what you imagine and at last you create what you will.”

“Life is not meant to be easy, my child; but take courage: it can be delightful.”

“I believe in the discipline of silence, and could talk for hours about it.”

“Youth is wasted on the young.”

“There is no love sincerer than the love of food.”

“Take care to get what you like or you will be forced to like what you get.”

“When a thing is funny, search it carefully for a hidden truth.”

“This is the true joy in life, the being used for a purpose recognized by yourself as a mighty one.”

“The most tragic thing in the world is a man of genius who is not a man of honor.”

“You’ll never have a quiet world till you knock the patriotism out of the human race.”

“Nothing is ever accomplished by a reasonable man.”

“Activity is the only road to knowledge.”

“It is not disbelief that is dangerous to our society; it is belief.”

“I never thought much of the courage of a lion tamer. Inside the cage he is at least safe from people.”

“Nothing is worth doing unless the consequences may be serious.”

“Do not try to live forever. You will not succeed.”

“Peace is not only better than war, but infinitely more arduous.”

“The sound body is the product of the sound mind.”

“Heartbreak is life educating us.”

“First love is only a little foolishness and a lot of curiosity.”

“Only in books has mankind known perfect truth, love and beauty.”

“The worst sin toward our fellow creatures is not to hate them, but to be indifferent to them: that’s the essence of inhumanity.”

“A miracle, my friend, is an event which creates faith.”

“Forgive him, for he believes that the customs of his tribe are the laws of nature!”

“A gentleman is one who puts more into the world than he takes out.”

“Lack of money is the root of all evil.”

“Greatness is one of the sensations of littleness”

“People do not become great by doing great things. They do great things because they are great.”

“Those who do not know how to live must make a merit of dying.”