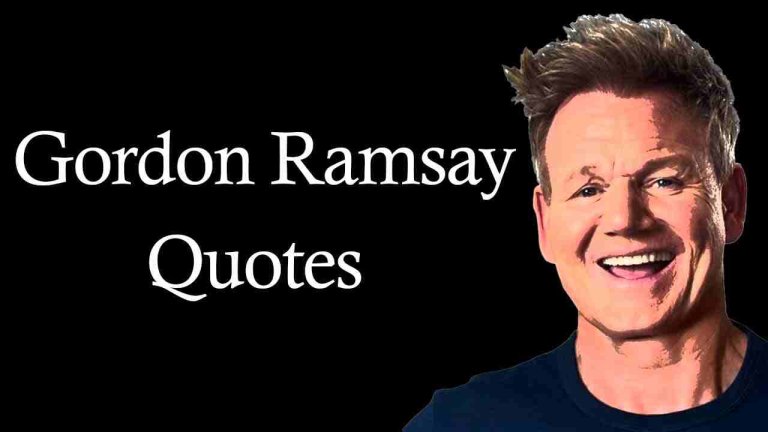 Gordon Ramsay is one of only three chefs in the UK to receive three Michelin stars for his restaurant (the others are Heston Blumenthal and Alain Roux). It has restaurants in Dubai, Tokyo, London, New York, Ireland, Canada, and, until 2015, West Hollywood at the iconic London Hotel on Los Angeles’ Sunset Boulevard. Here are some compilations of Gordon Ramsay Quotes.

Ramsay is known for showcasing competitive food and cooking television shows such as Hells Kitchen, The F Word, and Ramsays Kitchen Nightmares, as well as MasterChef USA, Hotel Hell, Gordon Ramsays 24 Hours to Hell and Back, and Next Level Chef.

“Swearing is industry language. For as long as we’re alive it’s not going to change. You’ve got to be boisterous to get results.”

“I think every chef, not just in America, but across the world, has a double-edged sword – two jackets, one that’s driven, a self-confessed perfectionist, thoroughbred, hate incompetence and switch off the stove, take off the jacket and become a family man.”

“My mum doesn’t enjoy sometimes listening to me tell staff off, and I say to my mum, it’s a kitchen, not a hair-dressing salon.”

“If you want to become a great chef, you have to work with great chefs. And that’s exactly what I did.”

“Put your head down and work hard. Never wait for things to happen, make them happen for yourself through hard graft and not giving up.”

“I love eating out. I don’t deny that. But I don’t want 12 or 15 courses because the chef wants me to taste this or taste that. I just want to be able to decide.”

“I spend more time in the kitchen than I have in the dining room, for obvious reasons, however, I just want to sit and indulge.”

“Cooking is about passion, so it may look slightly temperamental in a way that it’s too assertive to the naked eye.”

“There’s a bond among a kitchen staff, I think. You spend more time with your chef in the kitchen than you do with your own family.”

“I like finding talent. That’s what really turns me on, I suppose.”

“I still love football, though, and I think cooking is like football. It’s not a job, it’s a passion. When you become good at it, it’s a dream job and financially you need never to worry. Ever.”

“Eating out doesn’t have to be a formula. Eating out is about having fun. I get really frustrated when it’s badly done.”

“The minute you start compromising for the sake of massaging somebody’s ego, that’s it, game over.”

“When you’re cooking in the premier league of restaurants, when things go down, it has to be sorted immediately.”

“The pressure on young chefs today is far greater than ever before in terms of social skills, marketing skills, cooking skills, personality and, more importantly, delivering on the plate. So you need to be strong. Physically fit. So my chefs get weighed every time they come into the kitchen.”

“I train my chefs completely different to anyone else. My young girls and guys, when they come to the kitchen, the first thing they get is a blindfold. They get blindfolded and they get sat down at the chef’s table… Unless they can identify what they’re tasting, they don’t get to cook it.”

“I’ve had a lot of success; I’ve had failures, so I learn from the failure.”

“What’s frustrating more than anything is when chefs start to cut corners and believe that they are incognito in the way they send out appetizers, entrees, and they know it’s not 100 percent, but they think the customers can’t spot it.”

“I suppose your security is your success and your key to success is your fine palate.”

“If I can give you one strong piece of advice, when you go away for that romantic weekend, whatever you do, do not accept or take the upgrade to the honeymoon suite.”

“Being assertive and somewhat really firm has to be backed up with being fair.”

“I don’t like looking back. I’m always constantly looking forward. I’m not the one to sort of sit and cry over spilt milk. I’m too busy looking for the next cow.”

“I’m a big lover of fish. Cooking fish is so much more difficult than cooking protein meats, because there are no temperatures in the medium, rare, well done cooking a stunning sea bass or a scallop.”

“Chefs are nutters. They’re all self-obsessed, delicate, dainty, insecure little souls and absolute psychopaths. Every last one of them.”

“We are about creating a new wave of talent. We are the Manchester United of kitchens now. Am I playing full-time in the kitchen? I am a player-coach.”

“I cook, I create, I’m incredibly excited by what I do, I’ve still got a lot to achieve.”

“Cooking today is a young man’s game, I don’t give a bollocks what anyone says.”

“I don’t run restaurants that are out of control. We are about establishing phenomenal footholdings with talent.”

“I am a chef who happens to appear on the telly, that’s it.”

“When you cook under pressure you trade perfection.”

“I am the most unselfish chef in Britain today.”

“Find what’s hot, find what’s just opened, and then look for the worst review of the week. There is so much to learn from watching a restaurant getting absolutely panned and having a bad experience. Go and see it for yourself.”

“Kitchens are hard environments and they form incredibly strong characters.”

“There are very few chefs both in Britain and the States that really identify the secret of being consistent. And combine consistency with flavor.”

“I suppose I might be a player-coach nowadays. I’m a great teacher, and I enjoy teaching. But I’m glad I got injured and ended up turning to cooking. It was an accident but the happiest one of my life.”

“I’m not critic-proof, and I still take it personally, but I take it less personally now.”

“It’s very hard when you eat out every day for a living, and a new restaurant comes along and you haven’t got that same vigour that you had 10 years ago.”

“It’s vulgar, coming from where I do, to talk about money.”

“I swim like a fish and I have an amazing kick.”

“You don’t come into cooking to get rich.”

“If I relaxed, if I took my foot off the gas, I would probably die.”

“I act on impulse and I go with my instincts.”

“Would I swap what I have achieved as a cook if I could have been as successful as a footballer? Definitely.”

“When you find a guy who is powerful, a big father figure, you latch onto him immediately.”

“Running started as a way of relaxing. It’s the only time I have to myself. No phones or e-mails or faxes.”