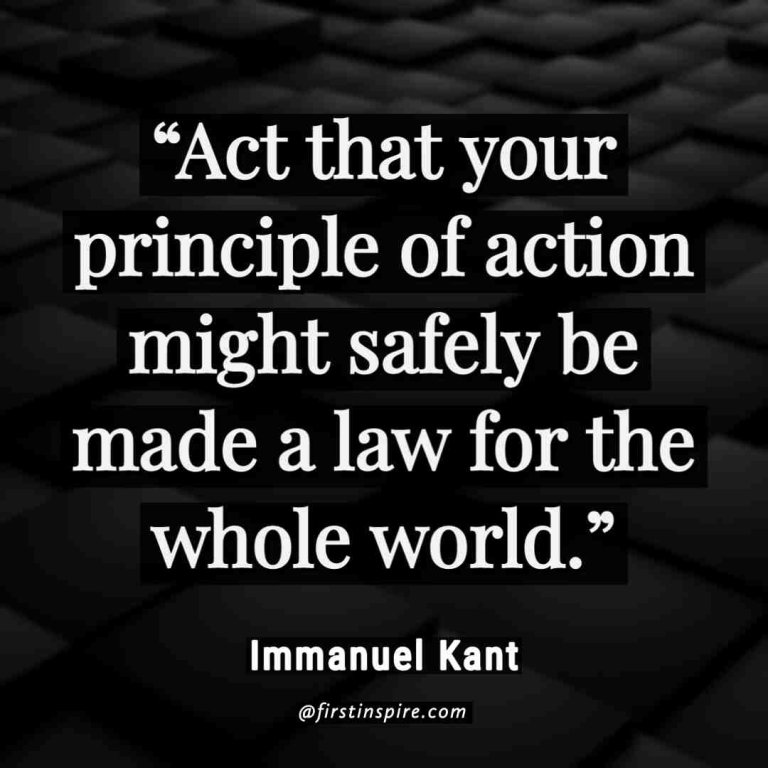 The philosophy of Immanuel Kant (1724–1804) can be divided into two major branches. His theoretical philosophy, which includes metaphysics, is based on the rational understanding of the concept of nature. Here is a compilation of Immanuel Kant Quotes.

“We can judge the heart of a man by his treatment of animals.”

“All our knowledge begins with the senses, proceeds then to the understanding, and ends with reason. There is nothing higher than reason.”

“Look closely. The beautiful may be small.”

“There is something splendid about innocence; but what is bad about it, in turn, is that it cannot protect itself very well and is easily seduced.”

“Two things awe me most, the starry sky above me and the moral law within me.”

“Always recognize that human individuals are ends, and do not use them as means to your end.”

“One who makes himself a worm cannot complain afterwards if people step on him.”

“Experience without theory is blind, but theory without experience is mere intellectual play.”

“Immaturity is the incapacity to use one’s intelligence without the guidance of another.”

“Whereas the beautiful is limited, the sublime is limitless, so that the mind in the presence of the sublime, attempting to imagine what it cannot, has pain in the failure but pleasure in contemplating the immensity of the attempt”

“Act that your principle of action might safely be made a law for the whole world.”

“One is not rich by what one owns, but more by what one is able to do without with dignity.”

“Seek not the favor of the multitude; it is seldom got by honest and lawful means. But seek the testimony of few; and number not voices, but weigh them.”

“Live your life as though your every act were to become a universal law.”

“In law a man is guilty when he violates the rights of others. In ethics he is guilty if he only thinks of doing so.”

“Out of the crooked timber of humanity, no straight thing was ever made.”

“Freedom is the alone unoriginated birthright of man, and belongs to him by force of his humanity.”

“Act so that the maxim of your act could be made the principle of a universal law.”

“An action is essentially good if the motive of the agent be good, regardless of the consequences.”

“Always treat people as ends in themselves, never as means to an end.”

“Give me matter, and I will construct a world out of it!”

“Criticism alone can sever the root of materialism, fatalism, atheism, free-thinking, fanaticism, and superstition, which can be injurious universally; as well as of idealism and skepticism, which are dangerous chiefly to the Schools, and hardly allow of being handed on to the public.”

“The possession of power inevitably spoils the free use of reason.”

“Feminine traits are called weaknesses. People joke about them; fools ridicule them, but reasonable persons see very well that those traits are just the tools for the management of men, and for the use of men for female designs.”

“If justice perishes, human life on Earth has lost its meaning.”

“Freedom is independence of the compulsory will of another, and in so far as it tends to exist with the freedom of all according to a universal law, it is the one sole original inborn right belonging to every man in virtue of his humanity.”

“Two things fill the mind with ever new and increasing admiration and awe, the oftener and more steadily we reflect on them: the starry heavens above and the moral law within.”

“Happiness is not an ideal of reason, but of imagination.”

“From such crooked wood as that which man is made of, nothing straight can be fashioned.”

“I had therefore to remove knowledge, in order to make room for belief.”

“Ingratitude is the essence of vileness.”

“Art is purposiveness without purpose.”

“Man’s greatest concern is to know how he shall properly fill his place in the universe and correctly understand what he must be in order to be a man.”

“There can be no doubt that all our knowledge begins with experience.”

“Human beings are never to be treated as a means but always as ends.”

“Democracy is necessarily despotism, as it establishes an executive power contrary to the general will; all being able to decide against one whose opinion may differ, the will of all is therefore not that of all: which is contradictory and opposite to liberty.”

“God put a secret art into the forces of Nature so as to enable it to fashion itself out of chaos into a perfect world system.”

“Nature, when left to universal laws, tends to produce regularity out of chaos.”

“The greatest human quest is to know what one must do in order to become a human being.”

“All human knowledge thus begins with intuitions, proceeds thence to concepts, and ends with ideas.”

“Without man and his potential for moral progress, the whole of reality would be a mere wilderness, a thing in vain, and have no final purpose.”

“Natural science physics contains in itself synthetical judgments a priori, as principles. … Space then is a necessary representation a priori, which serves for the foundation of all external intuitions.”

“In all judgments by which we describe anything as beautiful, we allow no one to be of another opinion.”

“But although all our knowledge begins with experience, it does not follow that it arises from experience.”

“Reason should investigate its own parameters before declaring its omniscience.”

“Metaphysics is a dark ocean without shores or lighthouse, strewn with many a philosophic wreck.”

“A categorical imperative would be one which represented an action as objectively necessary in itself, without reference to any other purpose.”

“If man makes himself a worm he must not complain when he is trodden on.”

“All the interests of my reason, speculative as well as practical, combine in the three following questions: 1. What can I know? 2. What ought I to do? 3. What may I hope?”

“Space and time are the framework within which the mind is constrained to construct its experience of reality.”

“The two great dividers are religion and language”

“The more we come in contact with animals and observe their behavior, the more we love them, for we see how great is their care of the young.”

“How then is perfection to be sought? Wherein lies our hope? In education, and in nothing else.”

“For peace to reign on Earth, humans must evolve into new beings who have learned to see the whole first.”

“Physicians think they do a lot for a patient when they give his disease a name.”

“Dare to know! Have the courage to use your own intelligence!”

“Every man is to be respected as an absolute end in himself; and it is a crime against the dignity that belongs to him as a human being, to use him as a mere means for some external purpose.”