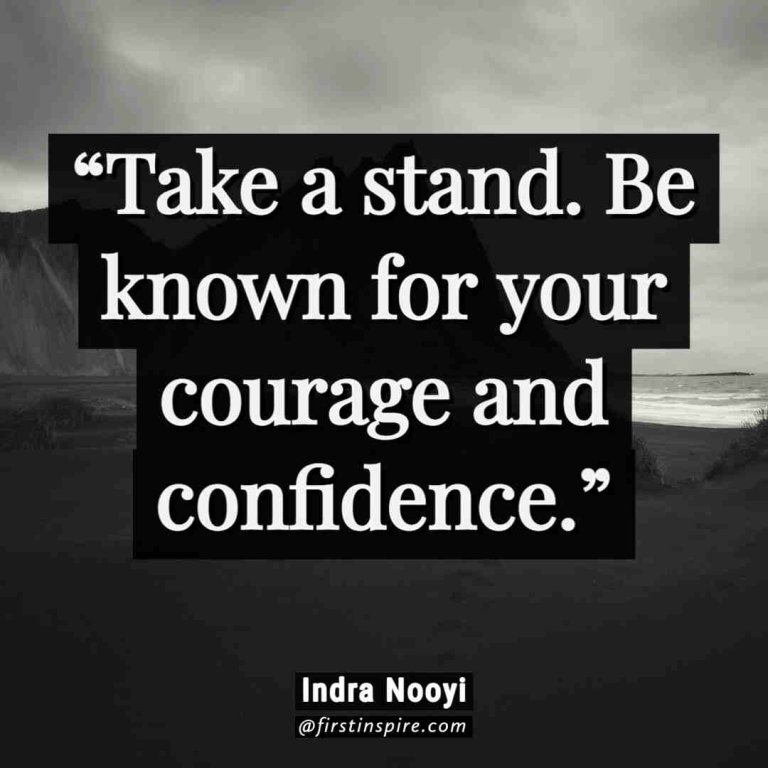 Indra Krishnamurthy Nooyi (born 28 October 1955) is an Indian business executive, and the current Chairperson and Chief Executive Officer of PepsiCo. She was ranked in Fortune magazine’s list of the “50 most powerful women in business” from 2006 to 2016. In 2007, she became the third-ever female CEO of a Fortune 500 company. Here are some Indra Nooyi Quotes.

“Leadership is hard to define and good leadership even harder. But if you can get people to follow you to the ends of the earth, you are a great leader”

“Every year in consulting is like three years in the corporate world because you have multiple clients, multiple issues – you grow so much.”

“The one thing I have learned as a CEO is that leadership at various levels is vastly different. When I was leading a function or a business, there were certain demands and requirements to be a leader. As you move up the organization, the requirements for leading that organization don’t grow vertically; they grow exponentially.”

“There is nothing like a concrete life plan to weigh you down. Because if you always have one eye on some future goal, you stop paying attention the the job at hand, miss opportunities that might arise, and stay fixedly on one path, even when a better, newer course might have opened up.”

“The biological clock and the career clock are in total conflict with each other.”

“I pick up the details that drive the organization insane. But sweating the details is more important than anything else”

“When I was president of the company, I said, ‘Okay, I can do this – piece of cake.’ Then when you are the CEO, the responsibilities multiply enormously because you worry about everything.”

“At the end of the day, don’t forget that you’re a person.”

“Most importantly, we want to create a company where every employee can bring their whole selves to work.”

“I’m very honest – brutally honest. I always look at things from their point of view as well as mine. And I know when to walk away.”

“Whatever anybody says or does, assume positive intent.”

“If I hadn’t had mentors, I wouldn’t be here today. I’m a product of great mentoring, great coaching… Coaches or mentors are very important. They could be anyone-your husband, other family members, or your boss.”

“Most companies target women as end users, but few are effectively utilizing female employees when it comes to innovating for female consumers. When women are empowered in the design and innovation process, the likelihood of success in the marketplace improves by 144%!”

“I grew up in a Hindu household but went to a Roman Catholic school. I grew up with a mother who said, ‘I’ll arrange a marriage for you at 18,’ but she also said that we could achieve anything we put our minds to an encourage us to dream of becoming prime minister or president”

“When you assume negative intent, youre angry. If you take away that anger and assume positive intent, you will be amazed. Your emotional quotient goes up because you are no longer almost random in your response.”

“Take a stand. Be known for your courage and confidence.”

“PepsiCo did not have a woman in the senior ranks, nor a foreign-born person who was willing to think differently”

“An important attribute of success is to be yourself. Never hide what makes you, you.”

“Whatever anybody says or does, assume positive intent. You will be amazed at how your whole approach to a person or problem becomes very different.”

“Just because you are CEO, don’t think you have landed. You must continually increase your learning, the way you think, and the way you approach the organization. I’ve never forgotten that.”

“I asked my parents for permission to study in America and they were so sure that I wouldn’t get in and get a scholarship that they encouraged me to try. So I applied to Yale and got an excellent scholarship. I then worked for the Boston Consulting Group for six and half years.”

“There will never be a replacement for that ongoing physical contact. But I don’t think blogging is meant to replace the face-to-face of friendships and meetings. Blogging is a way to keep in touch with a larger group of people on an ongoing basis, in a more efficient way.”

“My guilty pleasures are the websites where you can look at the fashions and see how different outfits will look. You can even take a picture of yourself and download it and play with the fashions! I love playing with these websites to see what I can learn.”

“As a leader, I am tough on myself and I raise the standard for everybody; however, I am very caring because I want people to excel at what they are doing so that they can aspire to be me in the future.”