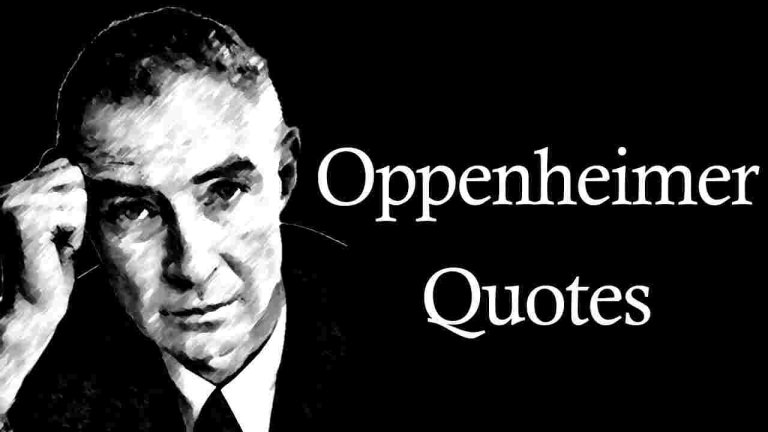 J. Robert Oppenheimer is responsible for all scientific experiments and procedures related to the development of atomic weapons. He has conducted important research in astrophysics, nuclear physics, spectroscopy, and quantum field theory. A teacher and science facilitator, he is remembered as one of the founders of the American Academy of Theoretical Physics, which gained worldwide fame in the 1930s.  We have compiled some J Robert Oppenheimer Quotes.

J. Robert Oppenheimer, also known as the “Father of the Atomic Bomb”, was an American nuclear physicist and director of the Los Alamos Laboratory (Manhattan Project). Oppenheimer was wartime head of the Los Alamos Laboratory and was one of those considered the “father of the atomic bomb” for their role in the Manhattan Project, the World War II feat that developed the first nuclear weapon. After Nazi Germany invaded Poland in 1939, Oppenheimer was chosen to head the laboratory for the Manhattan Project, the program that developed the first nuclear weapons during World War II.

When the Manhattan Project was launched in the fall of 1942, Oppenheimer was already considered an outstanding theoretical physicist and was actively involved in exploring the possibility of creating an atomic bomb. He was asked to take over the job of calculating neutrons, and in June 1942, General Leslie Groves appointed Oppenheimer as scientific director of the Manhattan Project.

After the war, Oppenheimer chaired the Atomic Energy Commission’s General Advisory Committee from 1947 to 1952, but his opposition to the development of a more destructive hydrogen bomb led to a treason charge the following year. This event ended the war almost immediately, after which Oppenheimer became president of the Institute for Advanced Study in Princeton, New Jersey, until his retirement in 1966.

“The optimist thinks this is the best of all possible worlds. The pessimist fears it is true. ”

“No man should escape our universities without knowing how little he knows.”

“Now, I am become Death, the destroyer of worlds.”

“It is a profound and necessary truth that the deep things in science are not found because they are useful; they are found because it was possible to find them.”

“Any man whose errors take ten years to correct is quite a man.”

“Knowledge cannot be pursued without morality.”

“We knew the world would not be the same. A few people laughed, a few people cried. Most people were silent.”

“My childhood did not prepare me for the fact that the world is full of cruel and bitter things.”

“There is no place for dogma in science. The scientist is free, and must be free to ask any question, to doubt any assertion, to seek for any evidence, to correct any errors.”

“Science is not everything, but science is very beautiful.”

“No man should escape our universities without knowing how little he knows.”

“The most beautiful philosophical song existing in any known tongue.”

“Genius sees the answer before the question.”

“Things which stimulate my curiosity are pretty far removed from the practical and therefore from classification.”

“This is a world in which each of us, knowing his limitations, knowing the evils of superficiality and the terrors of fatigue, will have to cling to what is close to him, to what he knows, to what he can do. . .”

“We know that the wages of secrecy are corruption. We know that in secrecy, error undetected will flourish and subvert.”

“Both the man of science and the man of action live always at the edge of mystery, surrounded by it.”

“There is something irreversible about acquiring knowledge; and the simulation of the search for it differs in a most profound way from the reality.”

“We may be likened to two scorpions in a bottle, each capable of killing the other, but only at the risk of his own life.”

“In the material sciences these are and have been, and are most surely likely to continue to be heroic days.”

“The physicists have known sin; and this is a knowledge which they cannot lose.”

“Discovery follows discovery, each both raising and answering questions, each ending a long search, and each providing the new instruments for a new search.”

“The greatest of the changes that science has brought is the acuity of change; the greatest novelty the extent of novelty.”

“The people of this world must unite or they will perish.”

“The theory of our modern technic shows that nothing is as practical as theory.”

“The best way to send information is to wrap it up in a person.”