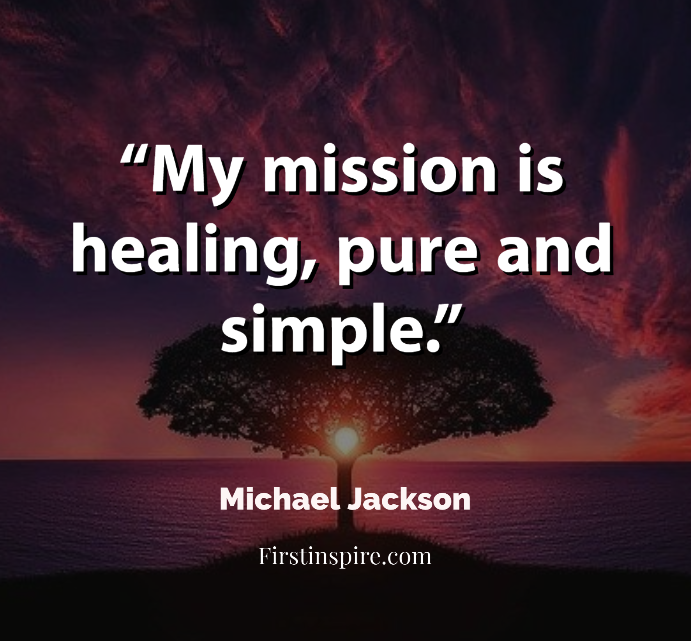 Michael Jackson was an American singer, songwriter, and dancer. Dubbed the “King of Pop”, he is regarded as one of the most significant cultural figures of the 20th century. Over a four-decade career, his contributions to music, dance, and fashion, along with his publicized personal life, made him a global figure in popular culture. Here are some of the inspirational Michael Jackson quotes.

Michael Jackson didn’t invent the steps like the moonwalk, but he was responsible for bringing them to the world’s attention. He inspired people to dance, especially boys, especially non-whites, and some of the great artists of his generation refer to him as the man who ignited their desire to move. It is difficult to separate a person from music when a person’s creativity is tantamount to a cultural phenomenon and its influence goes far beyond music.

Jackson joined his brothers when he was 5 years old and became the lead singer of the group. An infectious mix of pop and funk, Jackson hit the music world with 1979’s Off the Wall, which included the Grammy-winning single Don’t Stop Til You Get Enough, as well as hits like Rock with You. , “She is Out of My Life” and the title track. Such a phenomenal triumph catapulted Jackson into the stratosphere, and Bad, the long-awaited follow-up to 1987’s Thriller, again produced by Quincy Jones, kept him there, spawning five No. 1 Billboard singles and selling 30 million copies. internationally, two-thirds of which are outside the United States.

“I love to create magic – to put something together that’s so unusual, so unexpected that it blows people’s heads off. Something ahead of the times. Five steps ahead of what people are thinking.”

“The color of a person’s skin had nothing to do with the content of their character.”

“Magic is easy if you put your heart into it.”

“To give someone a piece of your heart, is worth more than all the wealth in the world.”

“I love surprising people with a present or a gift or a stage performance or anything.”

“Look at how many great actors or entertainers have been lost to the world because they did a performance one night and that was it. With film, you capture that, it’s shown all over the world and it’s there forever.”

“Being on stage is magic. There’s nothing like it. You feel the energy of everybody who’s out there. You feel it all over your body. When the lights hit you, it’s all over, I swear it is.”

“When I was five I was touring, singing and dancing. Always gone, always out of school.”

“Escapism and wonder is influence. It makes you feel good, and that allows you to do things. You just keep on moving ahead, and you say, ‘God, is this wonderful – do I appreciate it.’”

“I’ve heard that Black people and Black faces don’t sell magazines, but one day you’re going to beg me to be on there.”

“I love great music – it has no color, it has no boundaries.”

“My goal in life is to give to the world what I was lucky to receive: the ecstasy of divine union through my music and my dance.”

“Love is the human family’s most precious legacy. Its richest bequest. Its golden inheritance.”

“I want to always be youthful and have the energy to run around and play hide and seek, which is one of my favorite games.”

“For me, Love is something very pure.”

“I look at things and try to imagine what is possible and then hope to surpass those boundaries.”

“I do believe deeply in perfection. I’m never satisfied.”

“If you’re satisfied with everything you’re just going to stay at one level and the world will move ahead.”

“Heal the world! Stop the hate. Lend a helping hand to those in need.”

“It’s always difficult for anyone trying to compete against their past achievements.”

“God has always been in my heart and a part of my life and my family’s lives. It is through Him that we draw our strength.”

“Be the best at what you do. Get to know more about your field than anybody alive.”

“I love performing. It’s a phenomenal getaway. If you want to really let out everything you feel, that’s the time to do it.”

“Everyday create your history, every path you take you’re leaving your legacy.”

“The dream we were conceived in will reveal a joyful face, and the world we once believed in will shine again in grace.”

“If you don’t have that memory of being loved, you are condemned to search the world for something to fill you up.”

“No matter what you do, give it everything you have. Be the best, not the second best.”

“I love realism. I don’t like plastics. Deep down inside we’re all the same.”

“I like people who can make you laugh without using vulgarity, or bad words.”

“Be humble, believe in yourself, and have the love of the world in your heart.”

“You have to be loyal and true to one another, or your love will never last!”

“Study the greats and become greater”

“Live, be, move, rejoice — you are alive! Without the heart’s wise rhythm, we could not exist.”

“The meaning of life is contained in every single expression of life.”

“Forever continue to love, heal and educate the children. The future shines on them.”

“The thing that I love most about being on stage is making people happy…It’s my job to do that, and I enjoy it.”

“You can always dream, and your dreams can come true. But you have to make them come true”

“There’s nothing that can’t be done if we raise our voice as one.”

“Loyalty is such a rare quality; but my fans are the most loyal in the world.”

“I am an Instrument of Nature..Love is my message..”

“A star can never die. It just turns into a smile and melts back into the cosmic music, the dance of life.”

“Hope is such a beautiful word, but it often seems very fragile. Life is still being needlessly hurt and destroyed.”

“Let us dream of tomorrow where we can truly love from the soul, and know love as the ultimate truth at the heart of all creation.”

“Deep down inside we’re all the same. We all have the same emotions.”

“When all life is seen as divine, everyone grows wings.”

“I’m interested in making a path instead of following a trail, and that’s what I want to do in life – in everything I do.”

“We can fly, you know. We just don’t know how to think the right thoughts and levitate ourselves off the ground.”

“Whatever you believe, you become.”

“Somebody once said it’s the SOUL that matters”

“No matter what age you are, if you have it and you know it, then people should listen to you.”

“There was more to life than the things you could hold in your hands or see with your eyes.”

“The major ingredient of any recipe for fear is the unknown.”