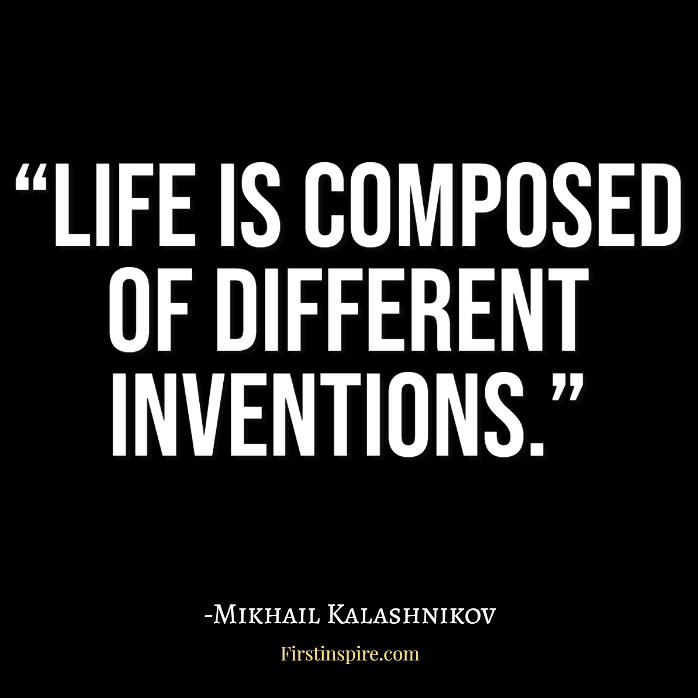 Mikhail Timofeyevich Kalashnikov was a Soviet and Russian lieutenant general, inventor, military engineer, writer, and small arms designer. He is most famous for developing the AK-47 assault rifle and its improvements, the AKM and AK-74, as well as the PK machine gun and RPK light machine gun. here are some Mikhail Kalashnikov quotes.

We have included few quotes by mikhail kalashnikov on Ak 47 where his inventions(weapon) have been into bad hands and a few more quotes where he found his invention being quiet useful. However it is, its upto our interpretation.

“I would prefer to have invented a machine that people could use and that would help farmers with their work – for example a lawnmower.”

“Before attempting to create something new, it is vital to have a good appreciation of everything that already exists in this field.”

“When a young man, I read somewhere the following: God the Almighty said, ‘All that is too complex is unnecessary, and it is simple that is needed’ … So this has been my lifetime motto I have been creating weapons to defend the borders of my fatherland, to be simple and reliable.”

“I sleep well. It’s the politicians who are to blame for failing to come to an agreement and resorting to violence.”

“I have continued to work at different things, and rebuilt my home all by myself. I did it for the sake of satisfaction at doing something. I did it because I happened to be where I was.”

“You see, with [designing]weapons, it is like a woman who bears children. For months she carries her baby and thinks about it. A designer does much the same thing with a prototype. I felt like a mother – always proud. It is a special feeling, as if you were awarded with a special award. I shot with it a lot. I still do now. That is why I am hard of hearing.”

“I’ve always wanted to improve and expand on the good name of my weapon by doing good things.”

“I tried a dozen different modifications that were rejected. But they all served as a path to the final design.”

“I had to gain experience as I did not have a technical education.”

“My aim was to create armaments to protect the borders of my motherland. It is not my fault that the Kalashnikov became very well-known in the world; that it was used in many troubled places. I think the policies of these countries are to blame, not the designers. ”

“Man is born to protect his family, his children, his wife. But I want you to know that apart from armaments, I have written three books in which I try to educate our youth to show respect for their families, for old people, for history.”

“It is the Germans who are responsible for the fact that I became a fabricator of arms. If not for them, I would have constructed agricultural machines.”

“Life can make you do many things, even kiss a man with a runny nose.”

“Then it was like a genie out of the bottle and it began to walk all on its own and in directions I did not want.”

“I was trying to perform as best as possible. I was a boy at the time, but worked well with the sickle.”

“Life is composed of different inventions.”

“I was probably born with some designing abilities.”

“I wanted to invent an engine that could run for ever. I could have developed a new train, had I stayed in the railway. It would have looked like the AK-47 though.”

“It is the Germans who are responsible for the fact that I became a fabricator of arms. If not for them, I would have constructed agricultural machines. (…) If someone asks me how I can sleep at night knowing that my arms have killed millions of people, I respond that I have no problem sleeping, my conscience is clean. I constructed arms to defend my country.”

“My spiritual pain is unbearable. I keep having the same unsolved question: if my rifle claimed people’s lives, then can it be that I a Christian and an Orthodox believer, was to blame for their deaths?”

“When I see Bin Laden with his AK-47, I got nervous. But what can I do, terrorists aren’t fools: they too chose the most reliable guns.”

“Terrorists also want to use simple and reliable arms.”

“My work is my life, and my life is my work. I invented this assault rifle to defend my country. Today, I am proud that it has become for many synonymous with liberty.”

“I am still ready to shake hands with anyone who designs a better assault rifle than mine.”

“I’m proud of my invention, but I’m sad that it is used by terrorists.”

“I created a weapon to defend the borders of my motherland. It’s not my fault that it’s being used where it shouldn’t be. The politicians are more to blame for this.”

“It is painful for me to see when criminal elements of all kinds fire from my weapon.”