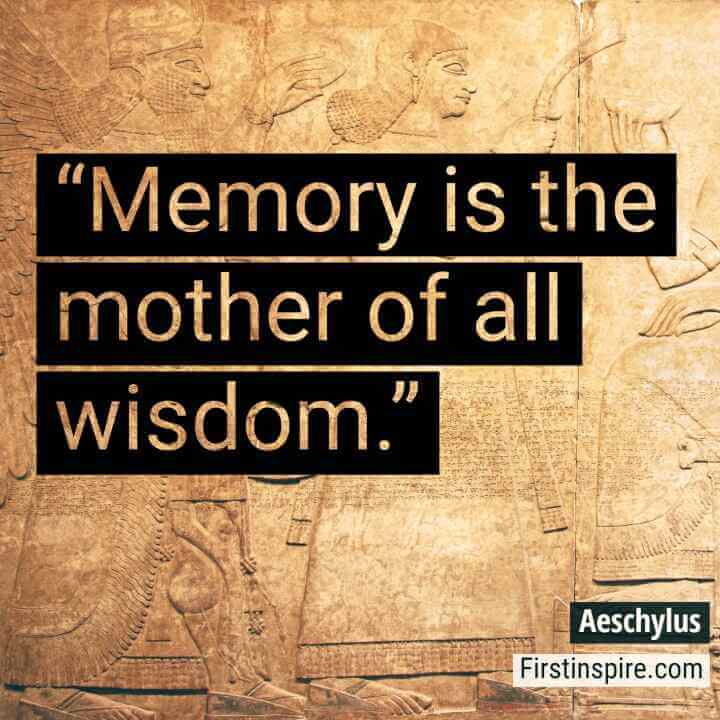 Aeschylus wrote between 70 and 90 plays, of which six or seven have survived to this day, along with various fragments of others, most notably The Catchers of Nets (Diktyulkoy) and The Spectators at the Isthmian Games (Istmiastai). Here is a compilation of Aeschylus Quotes.

Known as the father of tragedy, the playwright wrote up to 90 plays, winning half of the great Athenian feasts of Greek drama. He was the first of the great Greek tragedians, before Sophocles and Euripides, and is considered by many to be the inventor of the tragic drama. He is the first of three Greek tragedians whose works have survived, the others being Sophocles and Euripides.

“Happiness is a choice that requires effort at times.”

“In war, truth is the first casualty.”

“Better to die on your feet than live on your knees.”

“It is in the character of very few men to honor without envy a friend who has prospered.”

“From a small seed a mighty trunk may grow.”

“Few men have the natural strength to honor a friend’s success without envy.”

“It is always in season for old men to learn.”

“Destiny waits alike for the free man as well as for him enslaved by another’s might.”

“In the lack of judgment great harm arises, but one vote cast can set right a house.”

“He who goes unenvied shall not be admired.”

“Memory is the mother of all wisdom.”

“Time brings all things to pass.”

“There is no pain so great as the memory of joy in present grief.”

“Unanimous hatred is the greatest medicine for a human community.”

“A prosperous fool is a grievous burden.”

“Death is better, a milder fate than tyranny.”

“You have been trapped in the inescapable net of ruin by your own want of sense.”

“It is not the oath that makes us believe the man, but the man the oath.”

“It is a profitable thing, if one is wise, to seem foolish.”

“His resolve is not to seem the bravest, but to be.”

“I know how men in exile feed on dreams.”

“Learning is ever in the freshness of its youth, even for the old.”

“Call no man happy till he is dead.”

“Tame the savageness of man and make gentle the life of this world.”

“The reward of suffering is experience”

“There are times when fear is good. It must keep its watchful place at the heart’s controls.”

“I gave them hope, and so turned away their eyes from death”

“There is advantage in the wisdom won from pain.”

“God lends a helping hand to the man who tries hard.”

“But I will place this carefully fed pig Within the crackling oven; and, I pray, What nicer dish can e’er be given to man.”

“It is easy when we are in prosperity to give advice to the afflicted.”

“Fear is stronger than arms.”

“The seed of mortals broods o’er passing things, and hath nought surer than the smoke-cloud’s shadow.”

“Words are healers of the sick tempered.”

“When a man dies, flesh is frayed and broken in the fire, but not his will.”

“For in the voyage of the heart, there is a freight of hatred, and the wind of wrath blows shrill.”

“Lustre of man walking proud beneath the sky diminishes to nothing and goes unregarded.”

“Good fortune is a god among men, and more than a god.”

“In war the first casualty is the truth.”

“The evils of mortals are manifold; nowhere is trouble of the same wing seen.”

“Whoever is new to power is always harsh.”

“It is a light thing for whoever keeps his foot outside trouble to advise and counsel him that suffers.”

“I willingly speak to those who know, but for those who do not know I forget.”

“There is no disgrace in an enemy suffering ill at an enemy’s hand, when you hate mutually.”