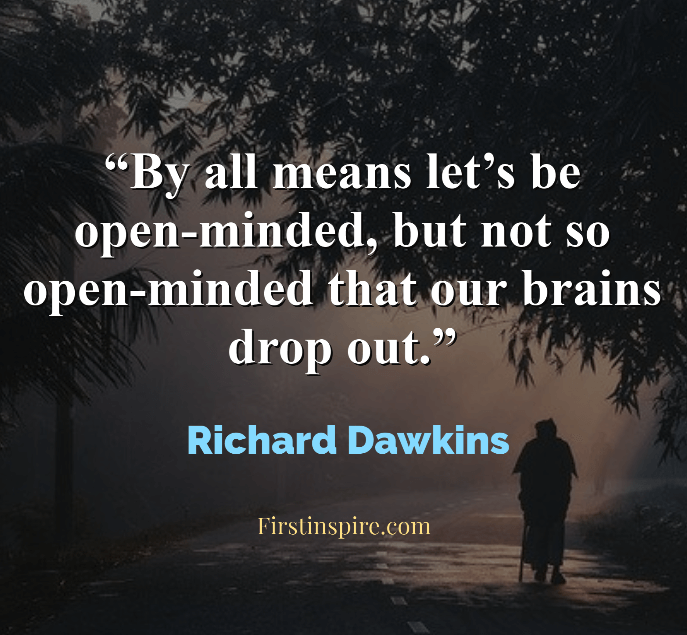 Richard Dawkins is a British evolutionary biologist and author. He is an emeritus fellow of New College, Oxford, and was Professor for Public Understanding of Science at the University of Oxford. An atheist, he is well known for his criticism of creationism and intelligent design. Here are some of the most famous Richard Dawkins quotes.

“Today the theory of evolution is about as much open to doubt as the theory that the earth goes round the sun.”

“The theory of evolution by cumulative natural selection is the only theory we know of that is in principle capable of explaining the existence of organized complexity.”

“Commonsense lets us down, because commonsense evolved in a world where nothing moves very fast, and nothing is very small or very large; the mundane world of the familiar.”

“It has become almost a cliche to remark that nobody boasts of ignorance of literature, but it is socially acceptable to boast ignorance of science and proudly claim incompetence in mathematics.”

“There is something infantile in the presumption that somebody else has a responsibility to give your life meaning and pointâ€¦ The truly adult view, by contrast, is that our life is as meaningful, as full and as wonderful as we choose to make it.”

“Some sort of belief in all-powerful supernatural beings is common, if not universal. A tendency to obey authority, perhaps especially in children, a tendency to believe what you’re told, a tendency to fear your own death, a tendency to wish to see your loved ones who have died, to wish to see them again, a wish to understand where you came from, where the world came from, all these psychological predispositions, under the right cultural conditions, tend to lead to people believing in things for which there is no evidence.”

“Be thankful that you have a life, and forsake your vain and presumptuous desire for a second one.”

“I don’t understand why so many people who are sophisticated in science go on believing in God. I wish I did.”

“Religious people are atheists about all other gods, atheists only take it one god further.”

“You can’t blame science for being used for evil purposes. What you can do is say, ‘This is an exceedingly powerful tool.’ And you want to make sure it is used for good purposes, not bad ones. That is a political decision.”

“Faith can be very very dangerous, and deliberately to implant it into the vulnerable mind of an innocent child is a grievous wrong.”

“We accept that people are irrational for good Darwinian reasons. But I don’t think we should be so pessimistic as to think that therefore we’re forever condemned to be irrational.”

“Science is the poetry of reality.”

“You can never be absolutely certain that anything doesn’t exist. But you can show that it’s unlikely.”

“Some people find clarity threatening. They like muddle, confusion, obscurity. So when somebody does no more than speak clearly it sounds threatening.”

“Scientific beliefs are supported by evidence, and they get results. Myths and faiths are not and do not.”

“Just because science can’t in practice explain things like the love that motivates a poet to write a sonnet, that doesn’t mean that religion can. It’s a simple and logical fallacy to say, ‘If science can’t do something therefore religion can.’”

“The fear of Hell is a very powerful motivation.”

“The fact that somebody does good doesn’t make their beliefs true.”

“Offense is what people take when they can’t take argument.”

“The idea of a divine creator belittles the elegant reality of the universe.”

“The time has come for people of reason to say: Enough is Enough! Religious faith discourages independent thought, it’s divisive and it’s dangerous.”

“Evolution could so easily be disproved if just a single fossil turned up in the wrong date order. Evolution has passed this test with flying colours.”

“Next time that somebody tells you something is true, why not say to them: ‘What kind of evidence is there for that?’ And if they can’t give you a good answer, I hope you’ll think very carefully before you believe a word they say.”

“Science flies you to the moon. Religion flies you into buildings.”

“There’s this thing called being so open-minded your brains drop out.”

“Something pretty mysterious had to give rise to the origin of the universe.”

“Natural selection is anything but random.”

“A delusion is something that people believe in despite a total lack of evidence.”

“Most of what we strive for in our modern life uses the apparatus of goal seeking that was originally set up to seek goals in the state of nature.”

“Atheism is not a religion. Abstinence is not a sex position.”

“After sleeping through a hundred million centuries, we have finally opened our eyes on a sumptuous planet, sparkling with color, bountiful with life.”

“Our brains have evolved to help us survive within the orders of magnitude of size and speed which our bodies operate at. We never evolved to navigate in the world of atoms.”

“All life evolves by the differential survival of replicating entities.”

“You can’t even begin to understand biology, you can’t understand life, unless you understand what it’s all there for, how it arose – and that means evolution.”

“Myths are fun, as long as you don’t confuse them with the truth.”

“Human vanity cherishes the absurd notion that our species is the final goal of evolution.”

“Human psychology has a near universal tendency to let belief be coloured by desire.”

“Science, as opposed to technology, does violence to common sense.”