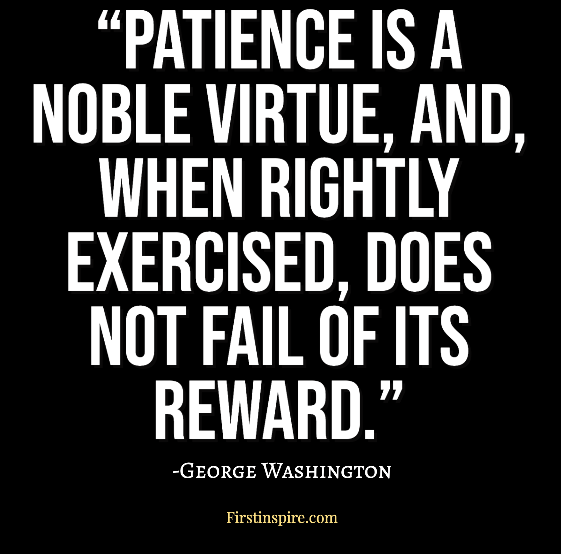 “It is better to be alone than in bad company.”

“Happiness depends more upon the internal frame of a person’s own mind, than on the externals in the world.”

“Worry is the interest paid by those who borrow trouble.”

“Be courteous to all, but intimate with few, and let those few be well tried before you give them your confidence.”

“Guard against the impostures of pretended patriotism.”

“The willingness with which our young people are likely to serve in any war, no matter how justified, shall be directly proportional to how they perceive the Veterans of earlier wars were treated and appreciated by their nation.”

“Discipline is the soul of an army. It makes small numbers formidable; procures success to the weak, and esteem to all.”

“Liberty, when it begins to take root, is a plant of rapid growth.”

“If the freedom of speech is taken away then dumb and silent we may be led, like sheep to the slaughter.”

“It is better to offer no excuse than a bad one.”

“The great rule of conduct for us, in regard to foreign nations, is, in extending our commercial relations, to have with them as little political connection as possible.”

“I hope I shall possess firmness and virtue enough to maintain what I consider the most enviable of all titles, the character of an honest man.”

“Make sure you are doing what God wants you to do–then do it with all your strength.”

“Truth will ultimately prevail where there is pains to bring it to light.”

“The turning points of lives are not the great moments. The real crises are often concealed in occurrences so trivial in appearance that they pass unobserved.”

“There is nothing which can better deserve your patronage, than the promotion of science and literature. Knowledge is in every country the surest basis of public happiness.”

“To persevere in one’s duty, and be silent is the best answer to calumny”

“A free people ought not only to be armed and disciplined, but they should have sufficient arms and ammunition to maintain a status of independence from any who might attempt to abuse them, which would include their own government.”

“Interwoven as is the love of liberty with every ligament of your hearts, no recommendation of mine is necessary to fortify or confirm the attachment.”

“It is infinitely better to have a few good men than many indifferent ones.”

“Peace with all the world is my sincere wish. I am sure it is our true policy, and am persuaded it is the ardent desire of the government.”

“A sensible woman can never be happy with a fool.”

“Providence has at all times been my only dependence, for all other resources seemed to have failed us.”

“It’s only natural for unbridled partisanship, unrestrained by allegiance to a greater cause, to lead to chaos.”

“I shall make it the most agreeable part of my duty to study merit, and reward the brave and deserving.”

“We should not look back unless it is to derive useful lessons from past errors, and for the purpose of profiting by dearly bought experience.”

“When we assumed the Soldier, we did not lay aside the Citizen.”

“Let your heart feel for the afflictions and distress of everyone, and let your hand give in proportion to your purse.”

“It will be found an unjust and unwise jealousy to deprive a man of his natural liberty upon the supposition he may abuse it.”

“It is impossible to account for the creation of the universe without the agency of a Supreme Being.”

“I have no other view than to promote the public good, and am unambitious of honors not founded in the approbation of my Country.”

“Nothing can be more hurtful to the service, than the neglect of discipline; for that discipline, more than numbers, gives one army the superiority over another.”

“It is on great occasions only, and after time has been given for cool and deliberate reflection, that the real voice of the people can be known.”

“The very idea of the power and the right of the people to establish government presupposes the duty of every individual to obey the established government.”

“The best means of forming a manly, virtuous, and happy people will be found in the right education of youth. Without this foundation, every other means, in my opinion, must fail.”

“My anxious recollections, my sympathetic feeling, and my best wishes are irresistibly excited whensoever, in any country, I see an oppressed nation unfurl the banners of freedom.”

“Our cause is noble; it is the cause of mankind!”

“When one side only of a story is heard and often repeated, the human mind becomes impressed with it insensibly.”

“Great people are not affected by each puff of wind that blows ill. Like great ships, they sail serenely on, in a calm sea or a great tempest.”

“The executive branch of this government never has, nor will suffer, while I preside, any improper conduct of its officers to escape with impunity.”

“If you see a quote on the Internet just because it has someone’s name on it doesn’t make it true.”

“It’s wonderful what we can do if we’re always doing.”

“A good moral character is the first essential. It is highly important not only to be learned but to be virtuous.”

“No man has a more perfect reliance on the alwise and powerful dispensations of the Supreme Being than I have, nor thinks His aid more necessary.”

“Discipline is the soul of an army.”

“Let thy carriage be such as becomes a man grave settled and attentive to that which is spoken. Contradict not, at every turn, what others say.”

“The very atmosphere of firearms anywhere and everywhere restrains evil interference – they deserve a place of honor with all that’s good.”

“Mankind, when left to themselves, are unfit for their own government.”

“I had always hoped that this land might become a safe and agreeable asylum to the virtuous and persecuted part of mankind, to whatever nation they might belong.”

“There is but one straight course, and that is to seek truth and pursue it steadily”

“Good moral character is the first essential in a man.”

“Patience is a noble virtue, and, when rightly exercised, does not fail of its reward.”

“I was no party man myself, and the first wish of my heart was, if parties did exist, to reconcile them.”

“Even respectable characters speak of a monarchical form of government without horror.”

“When a man does all he can, though it succeeds not well, blame not him that did it.”

“Life is always uncertain, and common prudence dictates to every man the necessity of settling his temporal concerns, while it is in his power, and while the mind is calm and undisturbed.”

“Experience has taught us that men will not adopt and carry into execution measures the best calculated for their own good without the intervention of a coercive power.”

“The most certain way to make a man your enemy is to tell him you esteem him such.”

“Good company will always be found much less expensive than bad.”

“To stand well in the estimation of one’s country is a happiness that no rational creature can be insensible of.”

“I wish to walk in such a line as will give most general satisfaction.”

“The company in which you will improve most will be least expensive to you.”

“Let experience solve it. To listen to mere speculation in such a case were criminal.”

“A free people ought not only to be armed, but disciplined; to which end a uniform and well-digested plan is requisite.”

“If we are wise, let us prepare for the worst.”