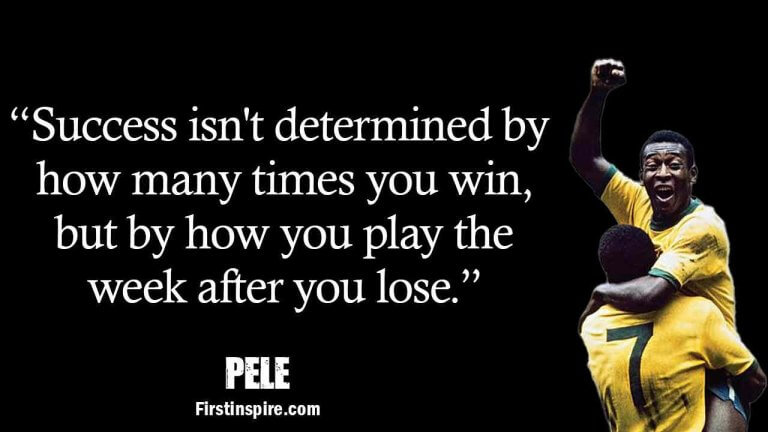 Pele was the most famous footballer in the world during the 1966 World Cup in England. Pele is the first man to hit a three-time World Cup title as Brazil’s victory secures the right to take home the Jules Rimet trophy. Here are some Pele Quotes.

After Pelé retired, he used his energy as an athlete and poured it into his career as a world pitcher and football ambassador. With the newfound fame of its top players, Santos developed into the Harlem Globetrotters of international football, with Pelé receiving most of Santos’ exhibition fees. Due to the connection of the phrase “Beautiful game” with football, Peles’ “exciting game and penchant for exciting goals” made him a star all over the world, and his teams toured all over the world to take full advantage of his popularity. He scored 12 goals in the World Cup competition and more than 1,000 goals in the first-class competition.

“The more difficult the victory, the greater the happiness in winning.”

“Success isn’t determined by how many times you win, but by how you play the week after you lose.”

“You must respect people and work hard to be in shape. And I used to train very hard. When the others players went to the beach after training, I was there kicking the ball.”

“Enthusiasm is everything. It must be taut and vibrating like a guitar string.”

“A team is not made up of isolated individuals. Always stay in the game. Don’t be passive. Football is a team game. No one plays alone. Success depends on your whole team being a single unit.”

“Considerable research on successful soccer players and their developmental history, affirms that a good percentage of them have spent time in isolation, working on soccer skills.”

“I’ve come to accept that the life of a frontrunner is a hard one, that he will suffer more injuries than most men and that many of these injuries will not be accidental.”

“If you don’t give education to people, it is easy to manipulate them.”

“If you ever want to be a decent player, you have to be able to use both feet without stopping to think about it.”

“No individual can win a game by himself.”

“Over the years I’ve learnt to live with two persons in my heart. One is Edson, who has fun with his friends and family; the other is the football player Pele. I didn’t want the name. ‘Pele’ sounds like baby-talk in Portuguese.”

“There is always someone out there getting better than you by training harder than you.”

“Sport is something that is very inspirational for young people.”

“Football is like a religion to me. I worship the ball, and I treat it like a god. Too many players think of a football as something to kick. They should be taught to caress it and to treat it like a precious gem.”

“When football stars disappear, so do the teams, and that is a very curious phenomenon. It is like in the theatre, in a play, where there is a great star. If the star is not well, the whole cast suffers.”

“To be a striker you need to be in good shape.”