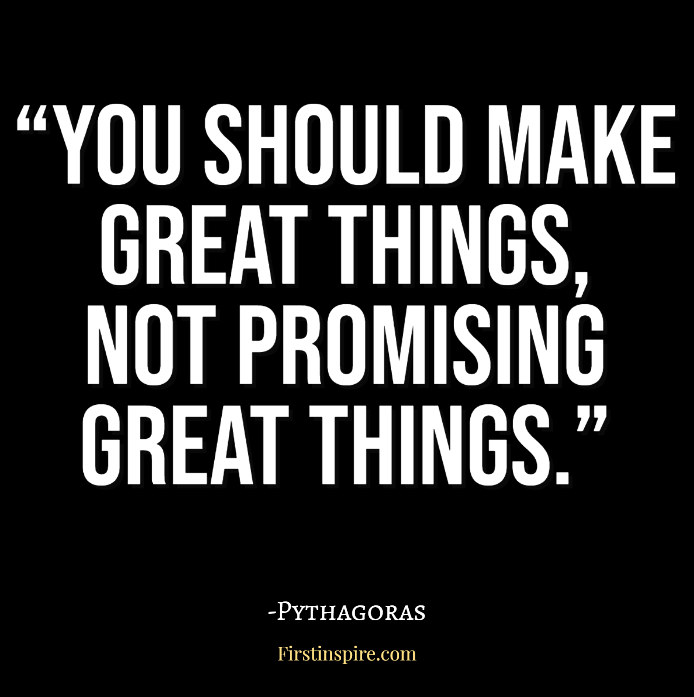 Pythagoras of Samos was an ancient Ionian Greek philosopher and the eponymous founder of Pythagoreanism. His political and religious teachings were well known in Magna Graecia and influenced the philosophies of Plato, Aristotle, and, through them, Western philosophy. Here are some Pythagoras quotes.

“Animals share with us the privilege of having a soul.”

“In anger we should refrain both from speech and action.”

“Silence is better than unmeaning words.”

“The oldest, shortest words – ‘yes’ and ‘no’ – are those which require the most thought.”

“As long as man continues to be the ruthless destroyer of lower living beings he will never know health or peace. For as long as men massacre animals, they will kill each other.”

“A fool is known by his speech; and a wise man by silence.”

“There is geometry in the humming of the strings, there is music in the spacing of the spheres.”

“Do not talk a little on many subjects, but much on a few.”

“Man know thyself; then thou shalt know the Universe and God.”

“A good Soul hath neither too great joy, nor too great sorrow: for it rejoiceth in goodness; and it sorroweth in wickedness. By the means whereof, when it beholdeth all things, and seeth the good and bad so mingled together, it can neither rejoice greatly; nor be grieved with over much sorrow.”

“As soon as laws are necessary for men, they are no longer fit for freedom.”

“Do not say a little in many words but a great deal in a few.”

“No one is free who has not obtained the empire of himself.”

“A thought is an idea in transit.”

“No man is free who cannot control himself.”

“The animals share with us the privilege of having a soul Alas, what wickedness to swallow flesh into our own flesh, to fatten our greedy bodies by cramming in other bodies, to have one living creature fed by the death of another! In the midst of such wealth as earth, the best of mothers, provides, yet nothing satisfies you, but to behave like the Cyclopes, inflicting sorry wounds with cruel teeth! You cannot appease the hungry cravings of your wicked, gluttonous stomachs except by destroying some other life.”

“The experience of life in a finite, limited body is specifically for the purpose of discovering and manifesting supernatural existence.”

“Be silent or let thy words be worth more than silence.”

“most men and women, by birth or nature, lack the means to advance in wealth or power, but all have the ability to advance in knowledge.”

“Choose rather to be strong of soul than strong of body.”

“Number is the ruler of forms and ideas, and the cause of gods and demons.”

“Despise all those things which when liberated from the body you will not want; invoke the Gods to become your helpers.”

“Time is the soul of this world.”

“Choose always the way that seems the best, however rough it may be; custom will soon render it easy and agreeable.”

“Love that shines from within cannot be darkened by obstacles of the world of consequences!”

“If there be light, then there is darkness; if cold, heat; if height, depth; if solid, fluid; if hard, soft; if rough, smooth; if calm, tempest; if prosperity, adversity; if life, death.”

“Reason is immortal, all else mortal.”

“It is better to be silent, than to dispute with the Ignorant.”

“Rest satisfied with doing well, and leave others to talk of you as they please.”

“Truth is so great a perfection, that if God would render himself visible to men, he would choose light for his body and truth for his soul”

“Learn silence. With the quiet serenity of a meditative mind, listen, absorb, transcribe, and transform.”

“The wise man should be prepared for everything that does not lie within his control.”

“A man is never as big as when he is on his knees to help a child.”

“Friends are as companions on a journey, who ought to aid each other to persevere in the road to a happier life.”

“Concern should drive us into action and not into a depression. No man is free who cannot control himself.”

“Above the cloud with its shadow is the star with its light. Above all things reverence thyself.”

“Salt is born of the purest parents: the sun and the sea.”

“We ought so to behave to one another as to avoid making enemies of our friends, and at the same time to make friends of our enemies.”

“If you have a wounded heart, touch it as little as you would an injured eye. There are only two remedies for the suffering of the soul: hope and patience.”

“When the wise man opens his mouth, the beauties of his soul present themselves to the view, like the statues in a temple.”

“Alas, what wickedness to swallow flesh into our own flesh, to fatten our greedy bodies by cramming in other bodies, to have one living creature fed by the death of another!”

“Educate the children and it won’t be necessary to punish the men.”

“Write in the sand the flaws of your friend.”

“The highest goal of music is to connect one’s soul to their Divine Nature, not entertainment”

“Declining from the public ways, walk in unfrequented paths.”

“Govern your tongue before all other things, following the gods.”

“Power is the near neighbour of necessity.”

“Dear youths, I warn you cherish peace divine, And in your hearts lay deep these words of mine.”

“None can be free who is a slave to, and ruled by, his passions.”

“Those alone are dear to Divinity who are hostile to injustice.”