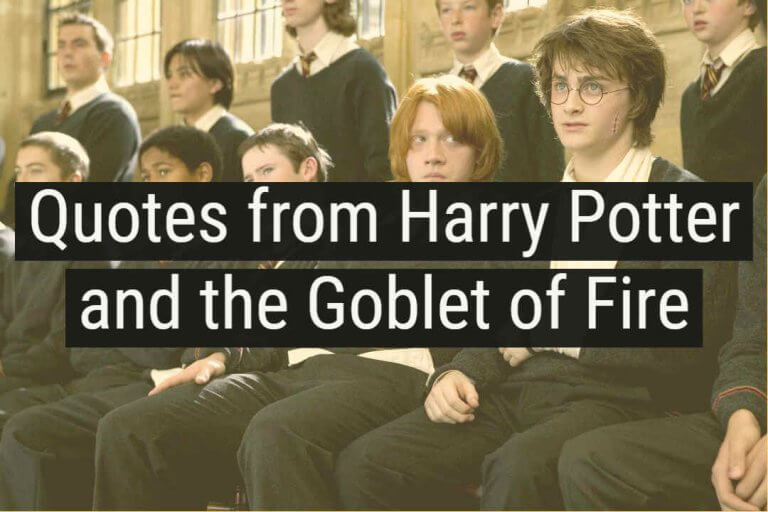 The Goblet of Fire is the fourth book in the Harry Potter series. It was written by J.K. Rowling and published on July 8, 2000.

We have compiled a list of quotes from Harry Potter – From the book “Harry Potter and the Goblet of Fire.”

The story starts with the Quidditch World Cup and then Harry’s life becomes more complicated when he is unexpectedly chosen as a Triwizard Tournament champion, which carries a lot of responsibility and pressure to perform well at Hogwarts school of Witchcraft and Wizardry. On top of that, dark forces are gathering around him, as he gets pulled into an increasingly dangerous world where people are killed for what they believe in.

“You’ve got to appreciate what the worst is. You don’t want to find yourself in a situation where you’re facing it.”

“Numbing the pain for a while will make it worse when you finally feel it.”

“Your devotion is nothing more than cowardice. You would not be here if you had anywhere else to go.”

“Decent people are so easy to manipulate, Potter.”

“What would come, would come…and you would have to meet it, when it did.”

“Anyone can speak Troll. All you have to do is point and grunt.”

You fail to recognize that it matters not what someone is born, but what they grow to be!”

“I sometimes find, and I am sure you know the feeling, that I simply have too many thoughts and memories crammed into my mind.”

“There are those who’ll turn innocent occasions to their advantage.”

“Curiosity is not a sin…. But we should exercise caution with our curiosity… yes, indeed.”

“If you want to know what a man’s like, take a good look at how he treats his inferiors, not his equals.”

“She can’t keep writing about what a tragic little hero I am, it’ll get boring.”

“Where’s the fun without a bit of risk?”

“Nothing like a nighttime stroll to give you ideas.”

“We are only as strong as we are united, as weak as we are divided.”

“Understanding is the first step to acceptance, and only with acceptance can there be recovery.”

“While we may come from different places and speak in different tongues, our hearts beat as one.”

“Someone creeping into his yard in the dead of night? More likely there’s a very shell-shocked cat wandering somewhere, covered in potato peelings.”

“We can fight it only by showing an equally strong bond of friendship and trust. Differences of habit and language are nothing at all if our aims are identical and our hearts are open.”

“And she was an idiot. Very nosy, but no brains, none at all. It’s not a good combination,”

“You’d think I walk around with my eyes shut, banging off the walls.”

“He wasn’t sure if he wanted to talk to him or hit him, both seemed quite appealing…”

“Differences of habit and language are nothing at all if our aims are identical and our hearts are open.”

“Time will not slow down when something unpleasant lies ahead.”

“I don’t like people who attack when their opponent’s back’s turned.”

“It is a strange thing, but when you are dreading something, and would give anything to slow down time, it has a disobliging habit of speeding up.”

“No good sitting worrying about it. What’s coming will come, and we’ll meet it when it does.”

“Remember, if the time should come when you have to make a choice between what is right and what is easy,”